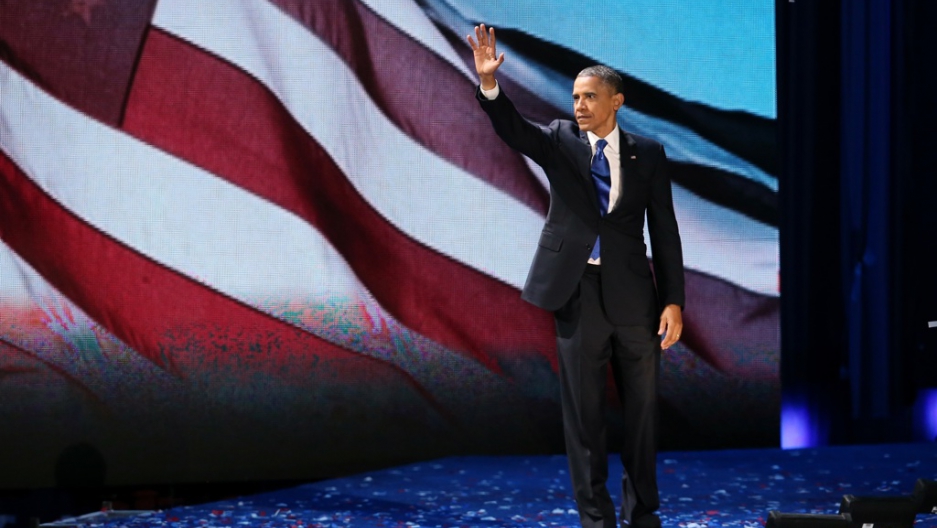 HANOVERTON, Ohio — Slightly hoarse but jubilant, newly re-elected President Barack Obama sounded a message of hope and reconciliation in his victory speech, delivered in what was for most Americans the wee hours of Wednesday morning.

Obama made a clean sweep of the table — while Florida is still not completely decided, Obama reached the magic number of 270 Electoral College votes needed to win even without Florida’s 29.

But as soon as most media outlets called the election for Obama — shortly after 11:15 p.m. Eastern Standard Time — the trouble began.

Donald Trump, who has bitterly opposed the president, began a bilious rant on Twitter calling for “revolution.”

“We should march on Washington and stop this travesty,” he tweeted.

As expected, Ohio was the state to put Obama over the top. His final Electoral College count may well be 332, provided Florida is decided in his favor. For a while it looked as if he could win the Electoral College vote but lose the popular count, a result that some say would have marred his presidency. The president needs a clear mandate if he is to be able to make any progress on dealing with the numerous problems the country is facing.

But as of Wednesday morning Obama was leading by more than 2.5 million votes.

Rove and Trump were not the only ones seemingly reluctant to accept an Obama victory. Republican candidate Mitt Romney waited for nearly an hour before making the traditional congratulatory call to the president, and finally delivered his concession speech just after midnight EST.

The delay may have been due to the fact that, according to media reports, Romney had been so confident of a win that he had drafted just one speech — for victory.

When the Republican candidate walked onto the stage he appeared chastened by his defeat. His wife Ann Romney appeared stiff and pained.

Romney’s speech was brief but gracious, saying he wished the president well. But he could not resist a note of regret.

“I so wish — I so wish that I had been able to fulfill your hopes to lead the country in a different direction, but the nation chose another leader,” he said. “And so Ann and I join with you to earnestly pray for him and for this great nation.”

The president was as “fired up and ready to go” as he’s ever been, despite the punishing schedule he has been keeping for the past weeks.

His speech was a triumph of conciliation, an attempt to heal the deep rifts that have opened up in the country during a long and exceedingly nasty campaign.

“Tonight, in this election, you, the American people, reminded us that while our road has been hard, while our journey has been long, we have picked ourselves up, we have fought our way back, and we know in our hearts that for the United States of America the best is yet to come,” he said.

“Each of us has deeply held beliefs. And when we go through tough times, when we make big decisions as a country, it necessarily stirs passions, stirs up controversy. That won’t change after tonight. And it shouldn’t. These arguments we have are a mark of our liberty.”

Obama will need to sound this message again and again as he goes through the immediate aftermath of his victory. The nation is still in severe economic crisis, the political scene is still fiercely divided, and the nation is facing a “fiscal cliff” at the end of the year unless Congress and the White House come to some kind of accord on spending cuts.

But this did not deter Obama as he reveled in his win. Amid a deafening chorus of cheers and a blizzard of confetti, he gave his final appeal, echoing his career-making speech at the Democratic National Convention in 2004:

“I believe we can seize this future together because we are not as divided as our politics suggests,” he said. “We’re not as cynical as the pundits believe. We are greater than the sum of our individual ambitions and we remain more than a collection of red states and blue states. We are, and forever will be, the United States of America.”