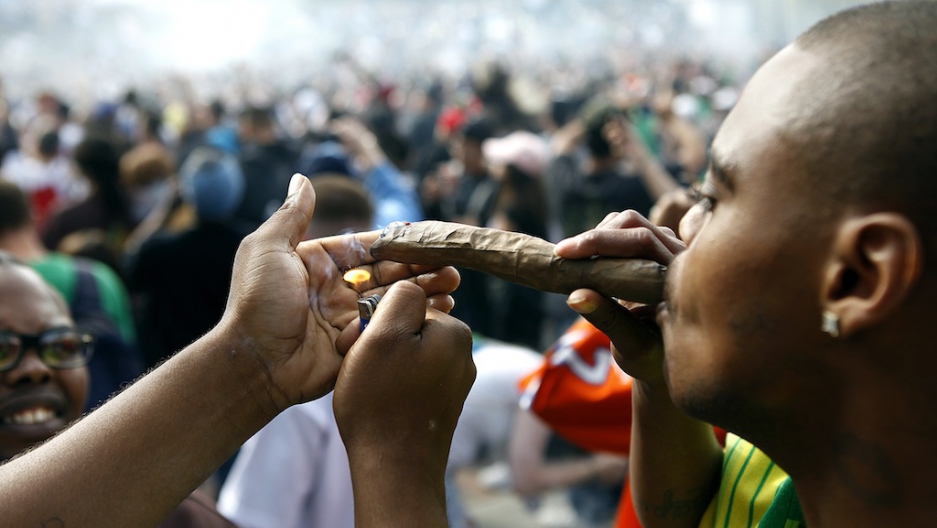 Smokers celebrate the state's medical marijuana laws in Denver, Colorado on April 20, 2012 and collectively light up at 4:20 pm. On Nov. 6, Colorado became the first state to legalize marijuana with the passing of Amendment 64.
Credit: Marc Piscotty
Share

Colorado and Washington legalized recreational use of marijuana yesterday, becoming the first states in history to do so. Voters in both states voted to allow citizens to carry, grow and smoke, and sales will be regulated by the states. A similar measure did not pass in Oregon.

Many see cannabis legalization as a fundamental civil right, something mature adults can consume at their pleasure or for medicinal purposes, and certainly the voters of Colorado and Washington feel this way.

Even conservative republicans like Pat Robertson, and libertarians like Ron Paul see marijuana prohibition as an infringement on rights, something the constitution should protect, as opposed to the federal government's outright outlawing a substance with very few demonstrably harmful properties.

"This war on drugs has been a detriment to personal liberty and it's been a real abuse of liberty," Ron Paul said during his failed campaign run earlier this year. "Someday we're gonna awake and find out that the prohibition we are following right now with drugs is no more successful, maybe a lot less successful, than the prohibition of alcohol was in the '20s."

What the ACLU has called a "seismic national shift" in attitude toward marijuana laws is obvious. Nineteen states have allowed medical marijuana to be legalized, and many cities have decriminalized cannabis in small amounts in an effort to get medicinal help to those who need it and end the crackdowns on non-violent soft drug users.

"Cannabis prohibition financially burdens taxpayers, encroaches upon civil liberties, engenders disrespect for the law, impedes upon legitimate scientific research into the plant's medicinal properties, and disproportionately impacts communities of color," said Paul Armentano, Deputy Director of the National Organization for the Reform of Marijuana Laws (NORML) this week. "For these reasons, a majority of Americans are now in favor ending marijuana prohibition and replacing it with a legal, pragmatic regulatory framework."

The federal government, however, disagrees, and maintains that any marijuana use, medicinal or otherwise, is still illegal.

A number of medicinal dispensaries were raided in Los Angeles in September in the latest round of the government's crackdown on states that don't conform with federal regulations.

U.S. Attorney Andre Birotte Jr. said to the Associated Press, "The sale and distribution of marijuana violates federal law, and we intend to enforce the law," despite the fact that dispensaries are protected by the California law that allows medicinal use with a prescription.

In the cases of Colorado and Washington, the Obama administration is reviewing the new laws, and the Denver Post says that although what the reaction will be is anyone's guess, the federal government could put up a challenge before the law totally goes into effect in 2014. The administration had no comment today.

Regardless of federal response, the ballot initiatives are historic.

Economically, states will likely see a boost, and tourism will also likely have an impact on local revenue. Although aspects of Colorado's Proposition 64 won't go into effect for over a year, some provisions, like personal use, will be allowed next month.

Allen St. Pierre of NORML, who celebrated the victory yesterday said he was looking forward to “the amount of cannabis tourism that’s about to happen," reports AlterNet.

"Over the past eight years in Colorado, we have argued that it is irrational to punish adults for choosing to use a product that is far less harmful than alcohol," Mason Tvert, co-director of the Campaign To Regulate Marijuana Like Alcohol, the group behind the measure, said in a statement, according to the Huffington Post.

The Denver Post reported that Tvert and other supporters say legalization will generate tens of millions of dollars in revenue for the state, which is set to tax sales through the Department of Revenue, tasked with regulating the shops that will sell cannabis.

“The momentum and the trend lines are on our side. We have public opinion, the notion of deference to responsible state and local laws, and the fiscal, public-safety, public-health, and moral arguments," said St. Pierre.

Beau Kilmer, co-director of the Rand Drug Policy Research Center, called the outcomes in Colorado and Washington "groundbreaking" to the Denver Post. “No modern jurisdiction has ever removed the prohibition on the production and possession of marijuana for recreational purposes. ... Since no one has done this before, there are a lot of uncertainties.”

A number of countries, besides the Netherlands, allow recreational use of marijuana, with differing outcomes.

Four cantons in Switzerland allow personal growing and consumption of up to four plants per person, but sales are still banned.

Canada favors legalization, but currently has only allowed medicinal use. In the early 2000s, Americans flooded over the border claiming refugee status, saying they were being persecuted for their medical marijuana after then-Attorney General Ashcroft clamped down on medical use. British Columbia alone does business to the tune of $6 billion a year with medical marijuana dispensaries.

Iran, surprisingly, has incredibly lax cannabis laws, and besides eating it (Iranians eat cannabis seeds) and selling hemp oil legally, it is also legal to grow plants with a license for food purposes. Possession is still illegal, but the fine for each gram is only Rials 10,000 (less than $2.)

Source: Legality of Cannabis by Country