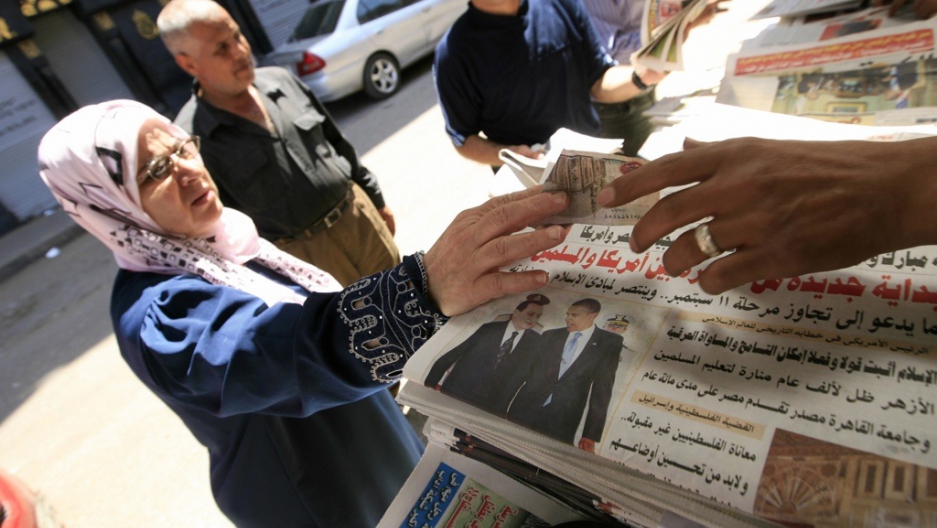 CAIRO, Egypt — Despite US President Barack Obama’s failure to deliver on his lofty rhetoric of peace in the Arab world after his last election, Egyptians nevertheless breathed a collective sigh of relief Wednesday morning.

Egyptians said that while Obama has not been perfect, he is less aggressive and more worldly than his Republican challenger, Mitt Romney.

“Well done @BarackObama — a big sigh of relief from Egypt. The alternative was just too awful to consider!” Hani Shukrallah, the editor of Egyptian news website, Ahram Online, tweeted in reference to Romney Wednesday morning.

Other Egyptians, on Twitter and in the streets, expressed satisfaction with Obama’s victory, congratulating Americans and hailing what they say is Obama’s Muslim heritage.

More from GlobalPost: What if the world could vote?

But some Cairo residents, seemingly unaware of the election results, simply shrugged at the news, and went about their day.

“It’s official?” said one young man at a popular Cairo café. “OK,” he nodded, before turning back to his smartphone.

In 2009, Obama chose Cairo as the locale for a key foreign policy speech aimed at undoing an era of fraught relations with the Middle East. Obama’s speech sparked a groundswell of hope that America would remake its policy of war and adventurism in the region.

But many Egyptians have indeed long since grown ambivalent to the American leader who disappointed the Muslim world by making little progress in resolving the Israeli-Palestinian conflict, and presiding over a campaign of drone strikes that have killed scores in Pakistan, Yemen and elsewhere.

At home, Egypt’s traditionally stable relationship with the United States has also undergone a series of transformations since Obama assumed office in 2008, not least of which was the toppling of former Egyptian president and stalwart US ally, Hosni Mubarak, in 2011.

Obama either sided with Egyptians’ democratic aspirations or enabled the Islamists’ rise to power, depending on whom you talk to here. In the year since the country’s 18-day revolt, the Obama administration was chided both for failing to adequately pressure Egypt’s erstwhile military rulers to handover power, and for meddling too deeply in Egyptian political affairs.

“[Obama’s] people have been sympathetic to the revolution but at the same time trying to maintain a balance,” said 26-year-old Egyptian activist, Wael Eskander. “It’s all about being as pragmatic as possible. The US is looking out for its own interests.”

In September, US-Egypt ties suffered a blow when hundreds of protesters demonstrating against an anti-Islam video clip stormed the US Embassy in Cairo.

Egyptian president and former Muslim Brotherhood leader, Mohamed Morsi, fumbled his response when he failed to condemn the breach. And in a significant break from decades-long US policy and in a move some analysts said indicated Obama was ready to pressure Egypt’s new rulers, Obama publicly said he did not consider Egypt an “ally.”

“Obama was forced to deal with Egypt following the revolution, which altered radically the dynamics of the relationship between Egypt and the United States,” said Azab Mustafa, a Brotherhood leader in Cairo. “We want to have an exceptional relationship with America, but no matter who is president, they will always want what’s most beneficial to them.”

Despite the pragmatic disappointment with Obama’s first term, a somewhat begrudging consensus formed that a second term for the president is preferable to a Romney-led foreign policy.

The Republican candidate — while garnering some support among those Egyptians who want to see the United States take a tougher stance against the Brotherhood — is seen by some here as having touted a Middle East view that aligns with the military bravado of former president George W. Bush.

“Romney is too much of a fundamentalist and will have the same policies as the war criminal George Bush,” Egyptian, Ahmed Salah, posted on Twitter.

In contrast, many Egyptians say they consider Obama a globally-savvy leader with a penchant for policies of relative nuance and understanding in the Arab world.

“The whole world would become enemies with America if Romney had won. He has a lot of enmity for the Arabs,” said Mahmoud Al Khadr, a waiter at a café in central Cairo.

“Obama, he is smart. He is forward-thinking,” he said. “I prayed that Obama would win.”