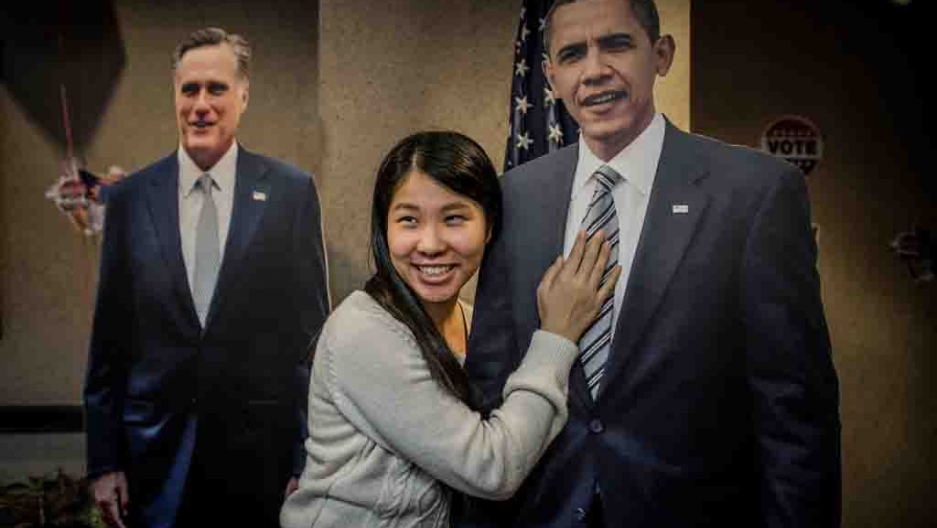 A Hong Kong student poses with a cut out of US President Barack Obama at the US consulate in Hong Kong on Nov. 7, 2012.
Credit: Philippe Lopez
Share

HONG KONG — The emotions in China weren’t all that different from the crowds cheering in downtown Chicago.

“My warmest congratulations to Obama for being re-elected. How great is the democracy of the United States, foe of tyrants, the land of liberty. May its universal values enlighten the world,” wrote one user in Anhui province.

When Hu Jia, a pro-democracy activist in Beijing, heard that Romney hoped for Obama’s success in his concession speech, he praised “the grace of democracy.”

"The electoral process in every democratic country is something for mainland Chinese to witness and study, because we want to achieve these in our own country,” Hu wrote in an earlier tweet.

By the middle of the afternoon, Obama’s victory was the most discussed item on Sina Weibo, racking up nearly 25 million posts.

A surprising number tried to gauge the financial impact of Obama’s re-election, and how this would affect their investments. “I guess he will continue to carry out economic stimulus, be bullish on the dollar at your own risk,” wrote one.

“Now that Obama’s elected, will the dollar continue to fall?” asked another.

Quite a few evinced a shrewd understanding of the mechanics of US politicking. “Behind President Obama’s election is an exceptionally strong team,” one user remarked. “The team, in fact, was like a Silicon Valley company’s management in how they ran the election.”

A writer in Beijing praised Michelle Obama for being “sincere, moving, and a master of PR!”

After a campaign that featured unprecedented use of China as a rhetorical punching bag, many Chinese were simply relieved. Indeed, analysts expect few major shifts in US-China relations during Obama’s second term.

“US policy towards China will not change significantly,” writes Shen Dingli, a professor of international relations at Fudan University in Shanghai. “The Obama administration followed through on George W. Bush’s weapons sales to Taiwan, and approved its own additional weapons package as well. ... He will likely continue to push the envelope in his next term.”

Chen Ziwu, a professor at Yale University, says that Obama may be on the hook to deliver more protectionist trade policies to voters in the manufacturing areas of the Midwest.

“More restrictions are likely, especially during his second term," Chen told China Daily. "He will have to pay back those voters in Ohio, Wisconsin and, of course, Michigan”

What will certainly change, however, is his diplomatic staff. Secretary of State Hillary Clinton is expected to step down, and chief Asia envoy Kurt Campbell is likely to depart as well. Massachusetts Senator John Kerry and UN Ambassador Susan Rice are two frequently mentioned candidates for Clinton’s job.

That’s not to say that relations with China under a second Obama term will be straightforward. Chinese officials remain suspicious of Obama’s pivot to Asia — particularly as China has grown more assertive in claiming its right to disputed islands in the South China Sea.

In official media, the American election was downplayed as something of a sideshow to China’s main political event: the once-a-decade transition of power that begins this Thursday in Beijing.

Hours after the results were announced, People’s Daily, the official mouthpiece of the Communist Party, had nothing more than a small headline buried far down on the webpage, below a much larger story on “America’s Problem: Money politics seldom supports reforms.”

Still, the election allowed Chinese citizens to draw a comparison between the two country's systems. While America’s election featured vigorous, open, often messy debates, China's 18th Party Congress has been surrounded with secrecy. Beijing has been put on lockdown, with taxis required to lock their windows to prevent the distribution of political materials, and the internet has slowed to a crawl.

Many remarked poignantly on the contrast.

"Obama is re-elected, why do I feel happy too? But I don’t feel that about the 18th Party Congress?" asked one user, as translated by Tea Leaf Nation.

“So when will we, in our Great Mother Country, be able to elect our own leaders?” asked another, in a translation by the China Media Project.

A recent survey found that eight out of 10 Chinese citizens believe the country should undertake further political reforms.

More from GlobalPost: What if the Chinese could vote in the US election? We asked them