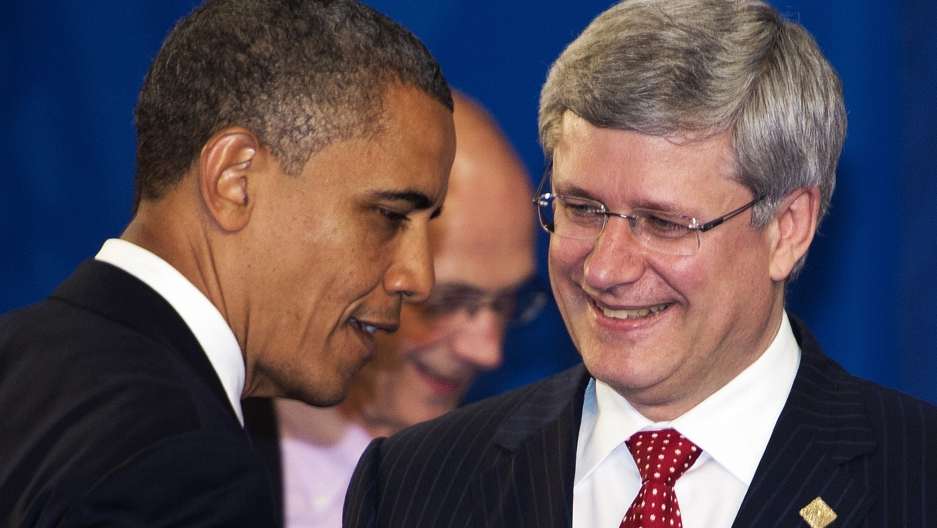 US President Barack Obama talks with Canadian Prime Minister Stephen Harper at a summit of the world's most powerful economies in Mexico on June 18.
Credit: Paul J. Richards
Share

KELOWNA, British Columbia — Daniel Roukema, a 41-year-old public relations professional in Toronto, was connecting with friends around the world all night through Facebook, hanging off updates until the networks finally called the election for Barack Obama.

“It was a great night, an exciting and somewhat nail-biting experience,” he told GlobalPost in an interview.

“Four years ago, Canada stopped to watch Obama, the Democrats and the US make history. Tonight, Canada held its breath, not for history, but simply because we felt the stakes were very high," he said late Tuesday night. "An Obama administration would stay the course while a President Romney could jeopardize the very fragile economic recovery Canada is experiencing.”

“I look forward to working with the Obama administration over the next four years to continue finding ways to increase trade and investment flows between our countries,” he said, highlighting his desire to see “transportation and security infrastructure necessary to take bilateral commercial relations to new heights.”

Then there is the Sun News Network — or "Fox News North" to its critics.

Staunchly conservative and no stranger to controversy, broadcaster Brian Lilley’s editorial “Welcome to Obamageddon” paints the Democratic victory as "nothing short of disaster" for Canada’s economy.

“I shudder to think what this president, one promised to fundamentally transform America, will do in a second term knowing that he never needs to face voters again,” Lilley write.

The average Canadian, though, was very pleased with the result.

They were happy to follow along on Twitter with the CBC — Canada’s national broadcaster — and its #USvoteCBC hashtag.

The majority of tweets gushed about Obama’s charm.

Looking forward to what Obama has to say. Always gracious, always humble. #USvoteCBC

And, as you’d expect from a nation famous for its manners, there was sympathy for Romney. Marc Perrot of Paradise, Newfoundland, said:

Mitt gave a sincere concession. I genuinely feel bad for him. He tried hard and really wanted this win. #election2012 #USvoteCBC

More from GlobalPost: What if Canadians could vote in the US election? We asked them