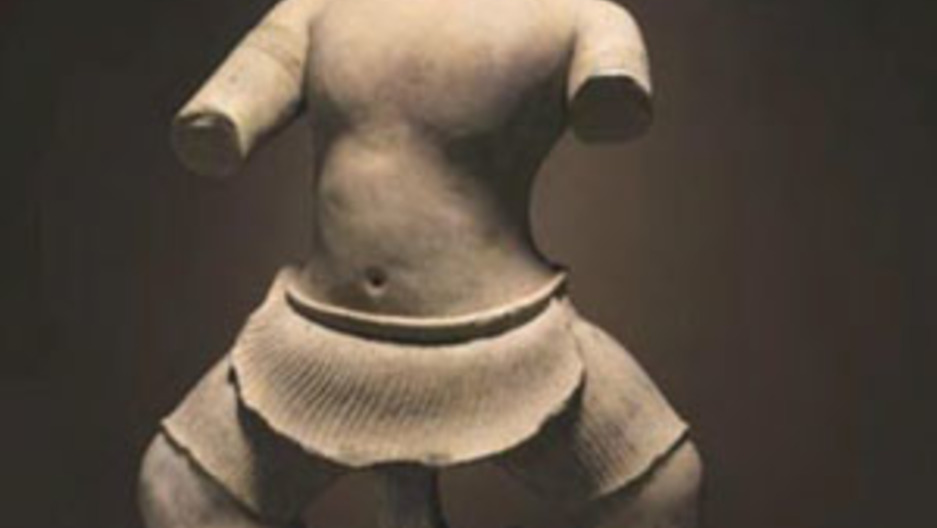 The 10th century Khmer sculpture at the center of a legal dispute between the U.S. and Cambodian governments and Sothebys. (Photo: Court Complaint)

Share
"Imagine how effective this massive guardian figure must have been when it originally protected a major temple in Cambodia," the Norton Simon Museum's audio guide intones. "There's a look of menace on the guardian's square face with its rolling eyes and arched eyebrows, curling mustache and stylized beard. Add the figure's thick neck, broad shoulders, and solid body, and it's clear that he's someone to be reckoned with." It is indeed. The five-foot-tall statue the guide is describing was carved during a burst of creativity in the 10th century, in what is today Cambodia–at the time it was part of the Khmer empire. A new king had come to power, moved the capital to a place called Koh Ker, and launched a temple-building spree. The statues that adorned the temples pushed already advanced Khmer artistry to new heights. "They weren't just creating large, monumental figures, they were creating figures that have extremely refined carving details," Helen Ibbitson Jessup says of the Koh Ker craftsmen. Jessup is an expert on Khmer art and founder of the non-profit Friends of Khmer Culture. "The muscular tension–the power—is so vividly expressed by the sculptor. It's extraordinarily dynamic statuary." Now, the Norton Simon statue, a companion piece at Sotheby's auction house in New York, and two other related ones at the Metropolitan Museum of Art in New York, are caught up in an international tug-of-war. The skirmish heated up in April, when the US government, at Cambodia's request, moved to seize the Sotheby's statue, saying it was likely looted. Cambodia then made similar claims about the other statues. One difficulty that's playing out right now in the Sotheby's case is that it's just not clear what laws apply here. "The cultural property law field is really a patchwork of different kinds of law," says Rick St. Hilaire, a cultural heritage lawyer who's been watching the Sotheby's case closely. "It's not a body of law that a law student would easily find in a case book." St. Hilaire thinks the case could have big implications. "How is this going to unfold? How is the law going to be impacted? How is policy going to be impacted? The outcome might very well dictate whatever policy might be embarked on in the future." Sotheby's, Norton Simon, and the Met declined to comment for this story. In June, a Met spokesperson told The New York Times that, in the 80s when these statues were given to the museum, there weren't clear rules on accepting such antiquities. Helen Ibbitson Jessup says others argue that when major museums preserve and display such statues, it serves a greater public good. "That preservation of antiquities from other countries is a great service that the museums of the West offer, that it shares the civilizations of other nations to a very wide audience and on a very meticulously well-preserved basis," Jessup says, summarizing this argument. In court hearings, Sotheby's lawyers have wondered why the Cambodian government is only now expressing interest in these statues, some of which have been on display for over 30 years. Jessup says one reason is that, for much of that time, Cambodia has been fighting—or recovering from—a devastating civil war. They've just recently started to take stock of their cultural heritage. Chen Chanratana publishes a magazine and website devoted to Khmer culture, and recently finished his doctoral dissertation on Koh Ker. He says that recovering works like these statues, and incorporating their stories into the broader Cambodian story, is part of his country's rebuilding process. "We can create the new story, or the history, about Cambodia. And we can see our ancestors have a lot of culture, have a lot of treasure in the past. And we have to learn about that, we have to know about that," he said over Skype from Phnom Penh. In the next few weeks, the judge will rule on a Sotheby's motion to dismiss the case.