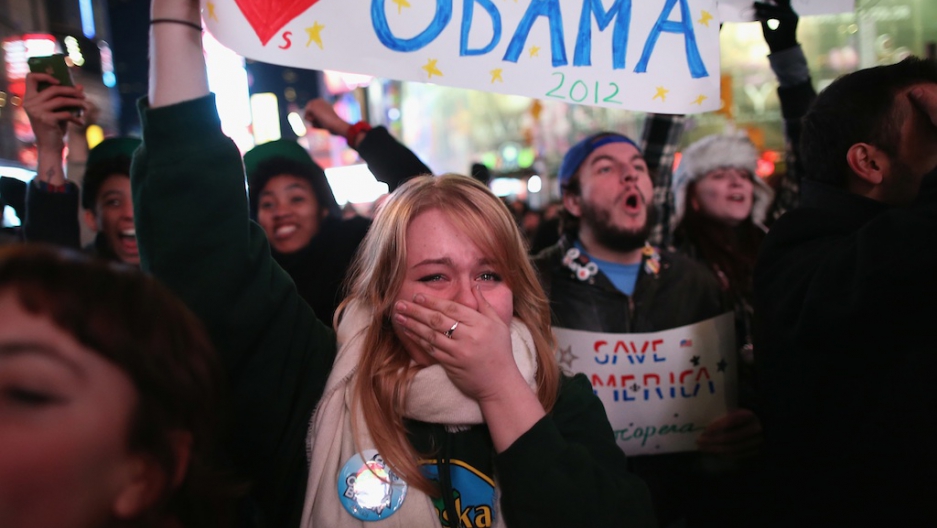 BROOKLYN, NY — On election night, about 200 enthusiastic Obama supporters gathered at the Galapagos Art Space to watch election results come in, but reminders of Hurricane Sandy were not far away.

The space, just a block from the East River, suffered $200,000 worth of damage from a massive 14-foot surge that dumped five feet of water on the venue during last week's storm.

A neighborhood gathering spot for locals and artists, Galapagos sits below the Brooklyn Bridge in the DUMBO neighborhood, on a block now lined with dumpsters and generators providing electricity to the area's flooded buildings and warehouses.

On Tuesday night, the space was packed with Brooklyn natives who gleefully watched President Barack Obama win a second term. But just one week ago, Galapagos was underwater.

"We were totally devastated, this entire venue was up to our neck in water," said Galapagos' director Robert Elmes. "We set a deadline and a finish line and we had to cross it ... We knew we had to, or we wouldn't stay alive."

Over 80 volunteers came to help — they siphoned water, mopped, and shoveled mud.

After a long week, many Obama supporters were finally able to enjoy some good news.

"The entire room burst into applause!" exclaimed Shree Dhond, a communications consultant, who was stranded in Connecticut during the storm. "It's good to be in a space when you hear good news like that. It's great to feel that energy."

"I'm proud to live in a country where people can love each other and get married, and no man in Washington can tell me what to do with my body," said Cheryl Fielding, 37, a British wedding planner. "This is the first year I was able to vote because I recently became a US citizen. I think the election process is a lot more flashy here, there's a lot more money [than Europe.]"

For Lola Dyer, 39, a registered nurse, the decisive issue of this election was abortion rights.

"For me, that was the huge difference between Romney and Obama," said Dyer. "I grew up in Nashville. Twenty-five percent of my family now wants to leave the country, they voted for Romney."

The evening was not only a victory for the president, but for a number of women who won contentious Senate races including Claire McCaskill, Elizabeth Warren, Tammy Baldwin and Kirsten Gillibrand.

"I'm very excited," said Katelyn Dominque, 23, an employment specialist. "I'm actually from Massachusetts. I did an absentee ballot. It's a big deal for me that Elizabeth Warren won. I'm almost proud of my state."

"I'm pleased," said Marcus Bance, the Galapagos security guard. At the same time, like so many New Yorkers, Bance is feeling the economic effects of the storm after missing work last week.

Bance said he felt Obama deserved four more years, despite the economy: "This guy is doing everything he possibly can. Give the guy a chance."