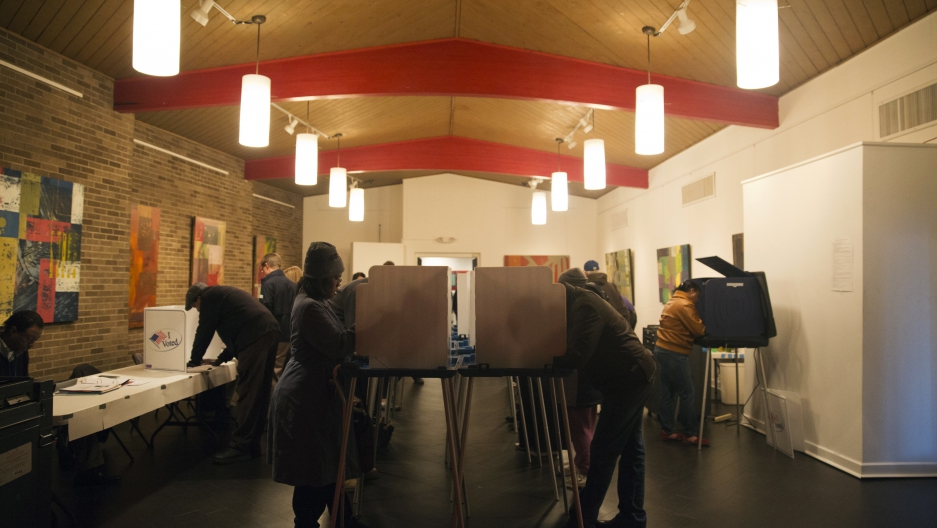 People vote at the Harrison Arts Center during the U.S. presidential election in Indianapolis, Nov. 6, 2012. (Photo by Aaron Bernstein/Reuters.)

It's Election Day in America.

Polls from Maine to Hawaii are open today for voters to cast ballots in the presidential election, 435 U.S. House races and 33 U.S. Senate races, as well as countless state house, state senate and other local elections.

Already, hundreds of thousands of ballots have been cast through advance voting, available in dozens of states. From Georgia to Kansas to Minnesota, voters were reporting waits of up to a half hour to vote early this morning, but voters seemed to be taking it in stride.

Vice President Joe Biden cast his ballot this morning in Delaware, while President Barack Obama voted in advance days ago. Republican Presidential Candidate Mitt Romney voted in Massachusetts while his running mate, Paul Ryan, was expected to do Tuesday morning in Wisconsin.

Find out where to vote and the issues up for election in your area.

The race between Obama and Romney is expected to be the most expensive presidential election ever, costing some $3 billion. President Obama's campaign had spent $931,471,420 on the 2012 election, while Mitt Romney's campaign had spent $1,022,753,733. The candidates' spending, in conjunction with the nearly $1 billion spent by super PACs, all add up to a historical level of expenditures on a single race.

In New York and New Jersey, voters were able to take advantage of a number of modifications to normal voting in order to accomodate people displaced by the Superstorm Sandy. In New Jersey, people were allowed to request mail-in ballots by email and fax, and submit them electronically as well. In New York, displaced voters were allowed to go to any polling place in the state to cast their ballots.

The first poll closings come at 7 p.m. ET with Georgia, Indiana, Kentucky, South Carolina, Vermont and Virginia all closing. In that bunch, Virginia is the state that seems to be really up for grabs. If Obama were to take Virginia, Romney's paths to victory would narrow dramatically. By 7:30 p.m. ET, North Carolina, Ohio

and West Virginia close. If Obama were to win both those states, Romney would have to pick up every other so-called swing state to claim victory.

On the flip side, if Romney won both of those states, he'd be in a commanding position, but Obama would still have multiple paths to victory.

The final polls, in Alaska, close at 1 a.m. ET. It remains to be seen if the election will be determined at that time, or whether we'll still be waiting until Wednesday — or perhaps even Friday.