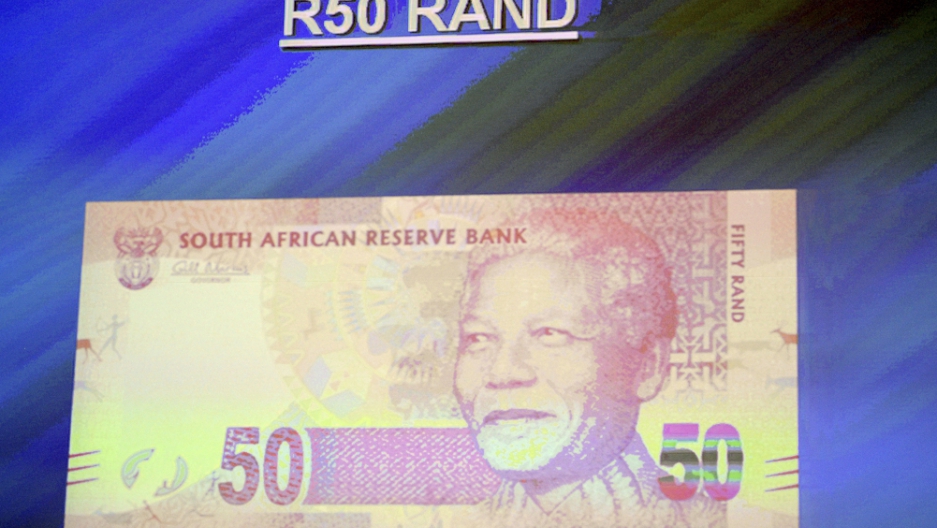 This picture taken on February 11, 2012 shows the new South African bank note of 50 Rand displayed on a screen during the announcement of a new line of bank notes in Pretoria. The new bank notes bear the former president's image Nelson Mandela circa 1990, the year he was freed from prison in a moment that came to symbolise the fall of apartheid and the rise of a new, democratic South Africa. They replace a design featuring the 'big five' safari animals (Cape buffalo, elephant, leopard, lion and rhino) introduced in 1992, two years before Mandela was elected the country's first black president.
Credit: STEPHANE DE SAKUTIN
Share

Instead, the "Big Five" will appear on the back of the notes, with Mandela on the front.

"He is delighted, very excited about it. We did show him the designs, the drafts and everything else," she told the South African Press Association.

Mandela, 94, became South Africa's first democratically elected president in 1994, and is often called by his clan name "Madiba" in South Africa as a term of respect.

"This is our way to pay tribute to him. Madiba does represent something special, not only in South Africa. He is really an extraordinary human being," Marcus said.

The Mandela bank notes are being issued in denominations of 10, 20, 50, 100 and 200 rand, and have security features including watermarks, micro-printing and unique numbering, SAPA said.

President Jacob Zuma earlier this year said the bank notes were a "humble gesture" to express the "deep gratitude" of South Africans toward Mandela.