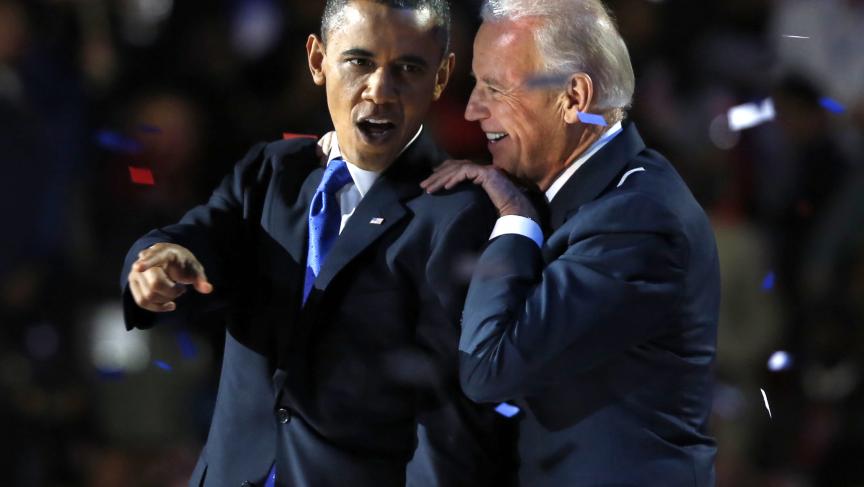 President Barack Obama was re-elected president Tuesday night with a comfortable victory in the electoral college, but a tighter result in the symbolic popular vote.

The Associated Press, BBC, CBC, CNN, Fox News and virtually all of the American broadcast networks gave the election to Obama between 11 p.m. and midnight, eastern time, when they determined that Obama was likely to win the intensely competitive state of Ohio. With Florida still not called, but with Obama leading, Obama had 303 electoral votes to Mitt Romney's 206. Obama looked set to have a total of 332 electoral votes, losing just two of the states that elected him in 2008.

In a speech before an adoring crowd in Chicago, Obama praised his opponent and vowed to work with both parties to solve the major problems that the country faces. But he also lauded and challenged America to move forward.

"We have picked ourselves up, we have fought our way back. We know in our hearts, for the United States of America, the best is yet to come," he said. "We need to make the difficult compromises to move this country forward."

Among the challenges he outlined: "reducing our deficit, reforming our tax code, fixing our immigration system, quitting ourselves from foreign oil."

He also talked of the problem of climate change — a political issue that had been largely unmentioned until Hurricane Sandy roared ashore in the northeast United States and thrust climate change back into the political equation.

Obama also gave a nod to the long lines many Americans faced at the polls on Tuesday — saying that was something that must be fixed.

But he also returned to a theme that got his elected in 2008: hope.

"I've never been more hopeful about our future. I've never been more hopeful about America. I ask you to sustain that hope," he said. "We're not as divided as our politics suggest. We're not as cynical as the pundits believe. We are greater than the sum of our individual ambitions. We remain more than the some of red states and blue states. We are and will forever be the United States of America."

Romney took the stage about an hour before Obama and delivered a roughly five minute speech that was brief, and gracious. He praised his wife and family, lauded his vice presidential candidate and congratulated Obama on his victory.

"I pray the president will be successful in guiding our nation," he said. "I believe in America. I believe in the people of America. I ran for office because I'm concerned about America. This election is over, but our principles endure."

For his part, Obama said he looked forward to sitting down with Romney in the days and weeks ahead to determine how the two could work together.

In addition to retaining the White House, Democrats maintain control of the U.S. Senate and even add to their majority, if independents caucusing with Democrats are included.

But there was some good news for Republicans. They will retain control of the U.S. House of Representatives and it appears they will even slightly increase their majority there.

The other big winner of the night was The New York Times' Nate Silver, who was on track to have used his mathematical algorithm to correctly pick at least 47 of 50 states, plus the District of Columbia. Silver has taken a beating recently from political pundits who had said the election would be much closer.