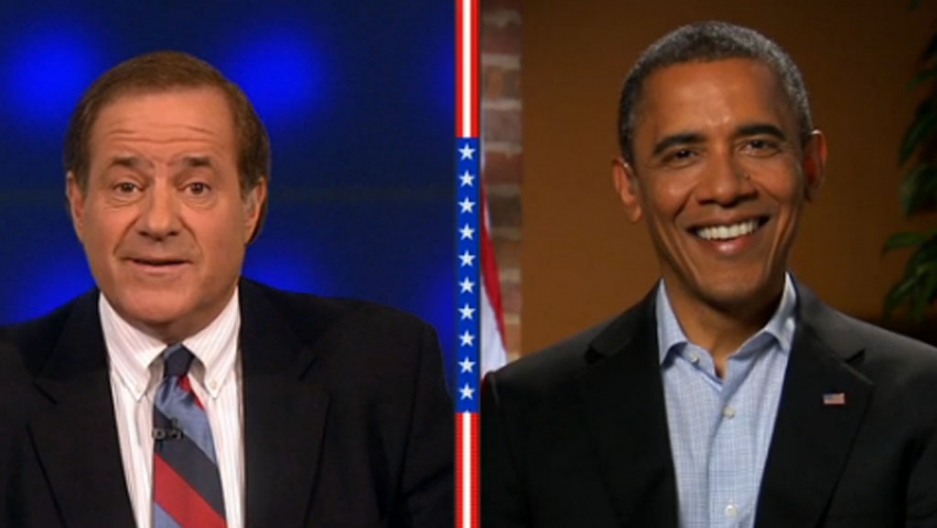 If you believe the candidates, President Obama is responsible for reforming the college football playoff and Mitt Romney is to thank for bringing a World Series and Super Bowl to New England.

During halftime of the New Orleans Saints-Philadelphia Eagles game (hey, ESPN, why not the Bears and Patriots? Try for that in 2016) Berman quizzed the candidates on their sporting preferences and their presidential priorities.

Not surprisingly, Obama suggested that Americans are the same, hard-working people regardless of where you are in the country.

“You don’t go to any place where folks don’t talk about some football,” Obama said.

He also believes his hometown Chicago Bears have what’s required to win the Super Bowl.

More from GlobalPost: Obama has strong edge among endorsements abroad

The president also joked that he fulfilled an early campaign promise when the NCAA introduced a college football playoff this year.

He made the comment four years ago when MNF aired interviews with Obama and the GOP’s John McCain.

As for Romney, the former governor of Massachusetts who grew up in Michigan, he admitted he was a Patriots fan.

“I’ve lived in Massachusetts now 40 years, and I take personal, full responsibility for their two Super Bowl wins as well as the Red Sox winning the World Series,” Romney said.

When the topics turned more serious, Romney said performance-enhancing drugs are the biggest challenge in sports, while the triumph of the human spirit is what he admired most as CEO of the 2002 Salt Lake City Winter Olympics.

More from GlobalPost: Mitt Romney says he’s ‘one day away’ from win