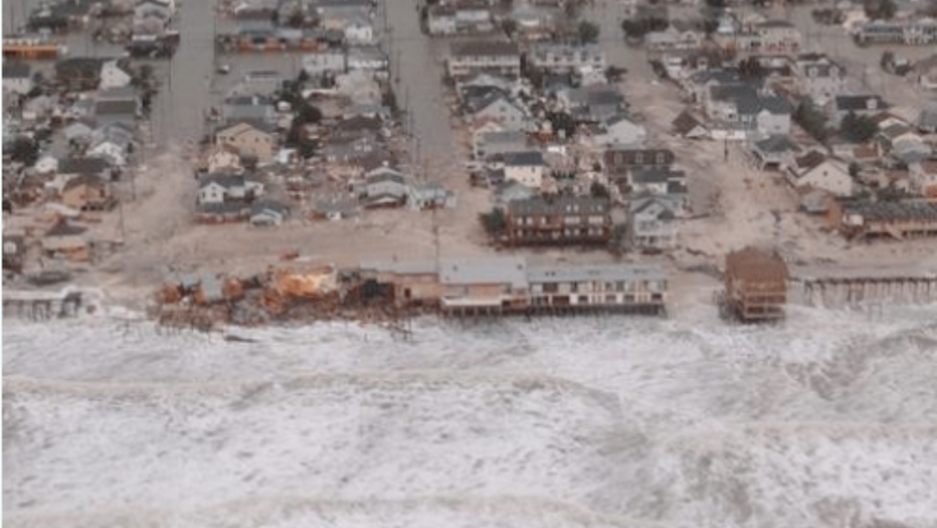 Hurricane Sandy battered the coast of Atlantic City when it came ashore last week. (Photo courtesy of the Department of Defense.)

It'll be months before the costs of super-storm Sandy are tallied but estimates currently range to $50 or $60 billion — or more.

Insurance companies will pick up the tab for part of that — and they're paying attention when scientists say climate change will increase the severity of storms.

Steve Dishart, who used to manage Communications for Zürich-based Swiss Re, lives in Westchester County — in New York. He went days without power or heat after Sandy came ashore. Re is part of the large reinsurance industry, the organizations insurance companies turn to when they're buying policies against catastrophic payouts.

Dishart's already predicting major losses for the insurance industry, from Sandy. The biggest events for insurance companies were hurricanes Andrew and Katrina. Sandy, he suspects, will be somewhere between those two.

"It’s hard to tell right now what the loss will be but you have to think about all the losses related to flooding in particular with homes all up and down the East Coast," he said. "There’s also business loss interruptions, which of course will be significant because we have one of the largest commercial regions in the country, so we’re talking very large impact and one of the most significant in our country’s history."

But even beyond that, he said, is the very real way Sandy will force insurers to re-evaluate how climate change may have increased or changed their risks.

"I think there is a view within the reinsurance industry that climate change will continue to have an impact and continue to increase. And it’s not just about global warming, the issue is volatility and severity with regards to climate, and that is what’s changing," he said.

Specifically, he's worried about volatility. Not just that the disasters are more severe, but also that they're coming more often and in more unusual places.

"The climate is changing – there is a tremendous agreement among scientists that it is changing – and we’re beyond the point now where we can adjust and try to dampen the impact," he said. "In fact, sadly, we need to face the concept of adaption."

Munich Re issued a report just before Sanduy that was entitled: "Severe Weather in North America," analyzing the new normal in natural disasters.

"Nowhere was the rising number of natural catastrophes more evident than in North America," it said. "The study shows a nearly quintupled loss events in North America, for the past three decades, compared to an increase factor of four in Asia and two in Europe."

Dishart says that there are many reasons for the dramatic rise over here, not the least of which is just the majority of people here who have insurance, as well as American's tendency to migrate south, and toward the coasts — where disasters, like hurricanes are more common.

And as the earth warms, he says, those hurricanes become more common and stronger.

"We’ve had all of these events, in Florida, along the Gulf, in California, and we have the most dense populations that we can moving to those areas," he said. "We don’t see the tremendous losses when we look at third world countries, because tragically, the poorest areas in Nicaragua, in Dominican Republic, in Haiti, don’t have the housing, don’t have the protection that we have here."