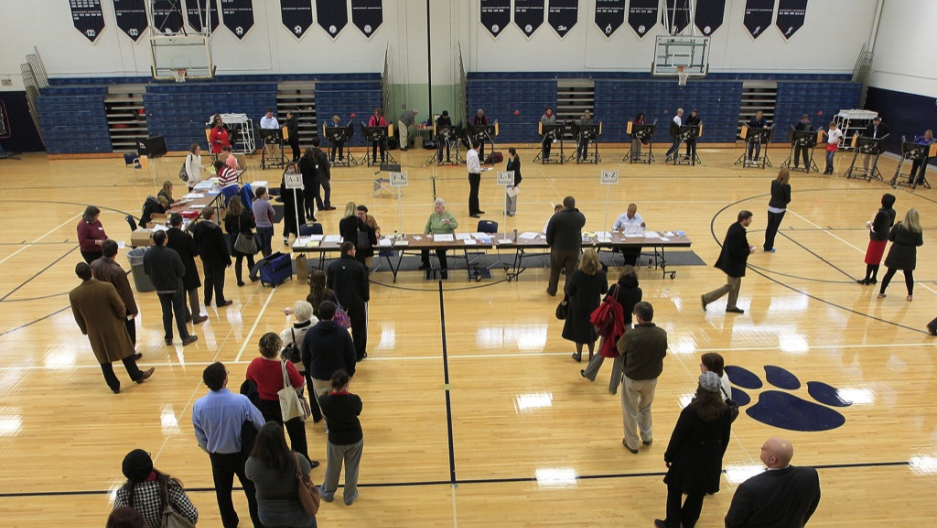 According to poll workers, there were lines in the early morning — before the polls opened at 6:30 a.m. But by noon the business of voting was proceeding smoothly and steadily in this residential neighborhood in northeast Columbus. There were no signs of the long lines reported at Ohio State University and in other areas of the capital.

These are well-established and immaculately maintained streets, with a population that is mostly African-American. That was expected to tilt the vote toward the president, something residents are not at all shy about.

“Barack Obama is my voice that is not being heard,” said Micah Hollins, an 18-year-old student, who was voting at Eastgate Elementary School. “I think he is the voice for a lot of people."

It was Hollins’ first election, and he was pretty excited.

“I think Obama will win,” he said. “I don’t know anyone who is voting for Romney.”

Certainly not Ivra Bassett, a 65-year-old veteran who voted early.

“I would hate to see where this country would go if Romney is elected,” he said. “I think he would get us into Iran the same way George Bush got us into Iraq."

Bassett is a Vietnam vet. “I served, Romney did not,” he said. "It is amazing how these guys are always willing to send other people’s kids to war.”

He was helping his friend cast his vote at the Brenthill Recreation Center.

“We have driver’s licenses,” he said. “If not, they’ll take a utilities bill or something, so it’s not too bad.”

Ohio requires a potential voter to show ID. Those without adequate identification can file provisional ballots, and then have to prove their eligibility after the election. Provisional ballots will only be counted in the event of a very close election requiring a recount.

“I sure hope we have a clear result tonight,” sighed one poll worker, who did not give her name because she was not authorized to speak with the press. “If not, there will be multiple lawsuits. I would hate to see Obama start a second term under that kind of a cloud.”

There were no complaints from voters surveyed about malfunctioning voting machines, an issue that has been discussed widely in the media.

No one seemed very upset about the voter ID requirement.

“I think the number of people without an acceptable ID is miniscule,” said Zakiyyah Muhammad, who was voting at St. Philip’s Episcopal Church. “It’s an overreaction that everyone’s so upset, I think.”

Muhammad was born and raised in Columbus, and is a Muslim. Her parents, she said, converted before she was born.

Muhammad voted for Obama, mostly because of his social policies. “I think women should have control over their own bodies,” she said. She was also skeptical of the Republican challenger, Mitt Romney.

“No one is really voting for him,” she said. “They are voting against Obama. I think a lot of it is racial.”

There was one couple at the St. Philip’s polling station that was firmly in the Romney camp — David and Sherrie Jenks, a white couple with four children.

“We have to stop mortgaging our kids’ future,” said David Jenks. “We need less government, less spending. Every time the government gets involved in something, they screw it up.”

Jenks, who works in the medical device industry, is not wealthy. He and his wife bought an abandoned house in this mostly black neighborhood and are fixing it up. But he believes that those with money should be left alone to do what they do best.

“I can’t create jobs,” he said. “I don’t have enough money. I’d love to be Bill Gates, but I’m not. There have to be people with money who can make jobs for the rest of us. If you tax them less, they will create more jobs.”

The couple feels the polarization in their community very deeply. Jenks said he got a Romney sign, but did not dare to put it in his front yard.

“I’m pretty fearless, but I’m not stupid enough to put a Romney sign in front of my house in this neighborhood,” he said. Instead, the couple put the sign on the corner of their street. “It lasted a day and a half,” he laughed.

David and Sherrie Jenks are committed, but not angry. If Obama is elected, said Jenks, they will “make the best of it.”

“We may have different ideologies, but we are all Americans, after all,” he said.