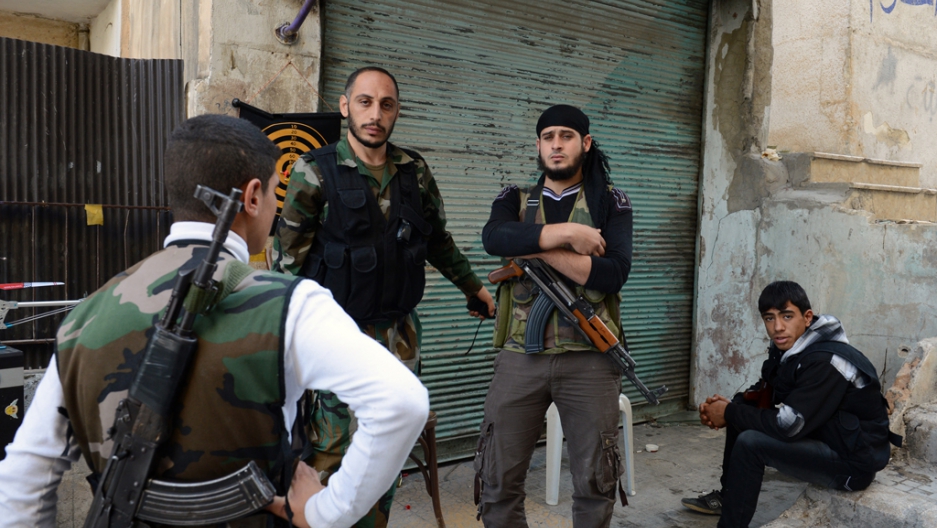 Syrian factions opposed to the Syrian government and President Bashar al-Assad are meeting in Qatar this week in an attempt to unify their ranks and form a cohesive, representative government-in-exile.

But "the opposition" in Syria refers to a complex collection of groups, ranging from the Syrian National Council — made up of Syrian exiles — to the Free Syrian Army, which includes army defectors and rebels fighting on the ground in Syria.

So, as the various "opposed" attempt to coalesce this week, what do we already know about them?

However, as The New York Times noted, the SNC was more caught up with in-fighting than with creating a transitional government, and it failed to include representation from Syrian minority groups such as the Christians or the Kurds.

"Its obscure academics and long-exiled activists also seem increasingly irrelevant in a civil war in which extremist jihadis are gaining more visibility," The Times noted.

Last week, US Secretary of State Hillary Clinton said, "We’ve made it clear that the SNC can no longer be viewed as the visible leader of the opposition," according to The Times. It could participate, she added, “but that opposition must include people from inside Syria and others who have a legitimate voice that needs to be heard."

Around 286 members of the SNC are taking part in the meeting in Doha, aiming for a compromise which would still allow the SNC to have influence in any representative government-in-exile.

The US-backed proposal by prominent Syrian dissident Riad Seif would set up an opposition leadership council of 50 seats, with 15 going to the SNC, according to the Associated Press. The remaining seats would be rounded out by local leaders in rebel-held areas and military commanders.

On Monday, a majority of the delegates voted to add several dozen more groups to the SNC, doubling the size of its general assembly to some 420, according to the AP.

Muslim Brotherhood: The Syrian Muslim Brotherhood spent three decades under persecution, but went on to become the dominant bloc within the SNC. The Washington Post reported that exiled Brotherhood members hold the largest number of seats in the SNC, and controlled its relief committee, which distributes aid and money to rebels. The Brotherhood's rise in Syria raised concerns in neighboring countries that the Assad regime would be replaced by an Islamist government, but the group's leaders have reassured neighbors such as Jordan, Iraq and Lebanon that they have no intention of establishing an Islamist government.

Ali Sadreddin Bayanuni of the Muslim Brotherhood said he supported "the idea of a political leadership to bring together the opposition," but would rather maintain the SNC (over which the Brotherhood holds considerable influence) than replace it with a new body, according to AFP.

At the time, the discontent was over Syria's involvement in Lebanon and tensions with the US, and signatories included the National Democratic Rally and the Muslim Brotherhood, as well as prominent dissidents such as Seif and Michel Kilo. However, fractures in the coalition appeared as it proved difficult to reconcile the leftist and secular parties' demands with those of the Islamists.

Local Coordination Committees of Syria: The committees emerged directly from the unrest in Syria, organizing across the different regions in Syria and using the Internet to report on the violence in Syria. The New York Times called them "wild cards" whose success "stemmed from an ability to stay decentralized, work in secret and fashion their message in the most nationalist of terms."

The committees have also succeeded where more seasoned groups have failed, involving the Syrian youth across divisions of sect, religion and class, The Times noted. Unlike the mostly exiled SNC, the committees' members are on the ground, facing the reality of the Syrian streets.

"The network of nascent political structures begins in villages and city neighborhoods, where activists working in coordinating committees mobilize support for demonstrations. At the district and city levels, Revolutionary Councils and Revolution Command Councils coordinate the activities of the local committees and interface with armed opposition groups," wrote the Post.

Syrian Revolution General Commission: The Christian Science Monitor described the SRGC as an umbrella organization of nearly four dozen groups seeking Assad's ouster. The SRGC made an official request for foreign intervention in September 2011, saying they hoped "to avoid being labeled traitors by asking first for human rights monitors rather than military intervention."

Free Syrian Army: Under the new plan, drawn up by Seif, the leadership of the coalition would include members of the Free Syrian Army, an armed group of rebels who have been fighting the Syrian government for months. Al Jazeera noted that the FSA is a mixture of armed rebel fighters, military defectors and Syrian civilians who took up arms, but it lacks a unified command structure.

The AP noted that rebel fighters are often split into small autonomous groups led by local leaders, with nominal ties to the FSA. However, in many conflict zones, fighters from a radical Islamic group inspired by Al Qaeda have come to prominence, worrying Western leaders.

National Coordination Committee for Democratic Change: This group, formed in September 2011, is made up of left-leaning political parties, three Kurdish parties and independent political and youth activists, according to Reuters. Led by Hussain Abdul Azim, the group opposes military intervention, including a "no-fly zone."

Dr. Randa Slim, a research fellow at the New America Foundation, told PBS, "The NCC calls for a dialogue with the regime conditional on the withdrawal of the military from the streets, the cessation of attacks against the protesters and the release of all political prisoners."