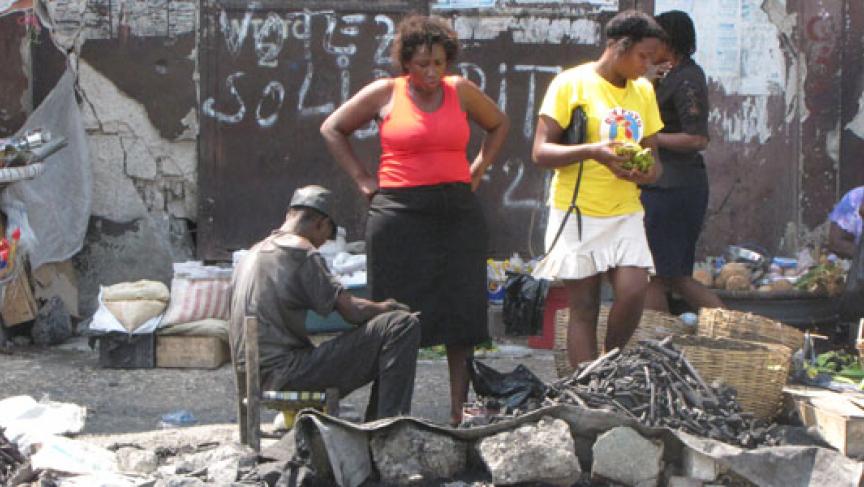 Vendors sell charcoal on the streets of Port-au-Prince. Charcoal is the primary source of fuel. (Photo by Amy Bracken.)

Haiti is one of those places where the needs are so great and diverse, it’s hard to know where to begin.

But some organizations design initiatives to address several problems at once. But over time, some of those

It started as an idea for helping to save Haiti’s beleaguered forests, clean up a filthy Port-au-Prince neighborhood, put people to work and reduce gang violence. It was an ambitious project, centered on a single, humble product.

It was a recycling center that produced cooking fuel from compressed paper in a dense and troubled neighborhood of Port-au-Prince. Hundreds of youths were hired to clean up trash and bring it to the center, where paper waste was processed into briquettes.

The project was set up by the United Nations Development Program, or UNDP. The hope was to offset some of the demand for charcoal made from trees, which was ravaging Haiti’s forests. And it worked, for a while. It even gained international attention from the likes of Bill Clinton.

In 2010, the plant, really just a big warehouse in the Carrefour Feuilles neighborhood, was bustling with workers pushing wheelbarrows of trash in one end and white paper briquettes the size of hockey pucks out the other.

Jean Clervil was the center’s security guard. He says late last year someone from the UN came and closed the doors, saying the project had failed. Since then, Clervil says, no briquettes have been made. He says he has no work, and the neighborhood is dirty again.

It’s a common lament here. Vladimir Jean Baptiste ekes out a living making sandals. He says he and his neighbors felt like there was a change in Haiti when they saw the young people working. Now, he says, people are back to begging for money.

No one disputes that the program worked well. The initial goal when it was launched in 2006 was to help tamp down growing gang violence. The UNDP’s Laura Sheridan says it succeeded at that and much more. But she says the economics were always dicey.

“As it went on, it sort of became evident that this is okay for now, we’re paying the wages for these people to work, to clean their community, [which] is very good, but how can that be a long-term solution?” Sheridan said.

The hope was that the sale of the paper briquettes and other recycled materials would cover the salaries of the workers. But that didn’t happen. Even with free raw material, the new fuel was just too expensive to compete broadly with dirt-cheap charcoal.

Father Gilbert Peltrop, the headmaster of a local Catholic school, says he’s seen this happen before. He says he remembers when something called “Bip Ti Cheri” came on the market.

“It was clean propane gas,” he said, “and it was subsidized, so people could afford it. But then the subsidy ended, and everyone went back to charcoal.”

For a while this time, Peltrop’s school used the recycled paper briquettes to cook students’ lunches. They were a big customer. But since the factory closed, the school has had to go back to charcoal, which doesn’t sit well with Father Peltrop.

“It’s the responsibility of both the government and those who want to help Haiti to get together and find a way to provide this service,” Peltrop said.

The UNDP’s Laura Sheridan says the agency still hopes to find a way to revive the project. She says it’s turned the factory over to the government of Port-au-Prince, but the project has been slow to get traction with the city.

“The mayor has changed three times in Port-au-Prince since the start of this year,” Sheridan said. “We’re following up with them constantly. And if there are any interested partners that would be the mayor’s office that would decide. But for the moment we don’t have the funds, and we don’t have a project team working on it.”

No one from the mayor’s office or the sanitation department were available to talk about the project. And the Minister of the environment cancelled several scheduled interviews. But Haiti’s former Environment Minister, Yves André Wainright, says the recycled paper briquettes and other alternatives to charcoal could be made to work with a simple change in national policy.

He advocates a tax on charcoal, which could make alternatives like the recycled paper briquettes more economically viable.

Sister Yola Norelus, an administrator at Saint Gerard School, agrees that the fix really could be that simple.

“It’s about means,” she said. “As soon as it’s affordable, everyone will adapt to the new fuel. The briquettes are better for them.”

It seems that just about everyone agrees that the community-based recycling program to produce the new cooking fuel was a great idea, which helped address many problems at once. What seems to be eluding decision-makers is how to make it last.