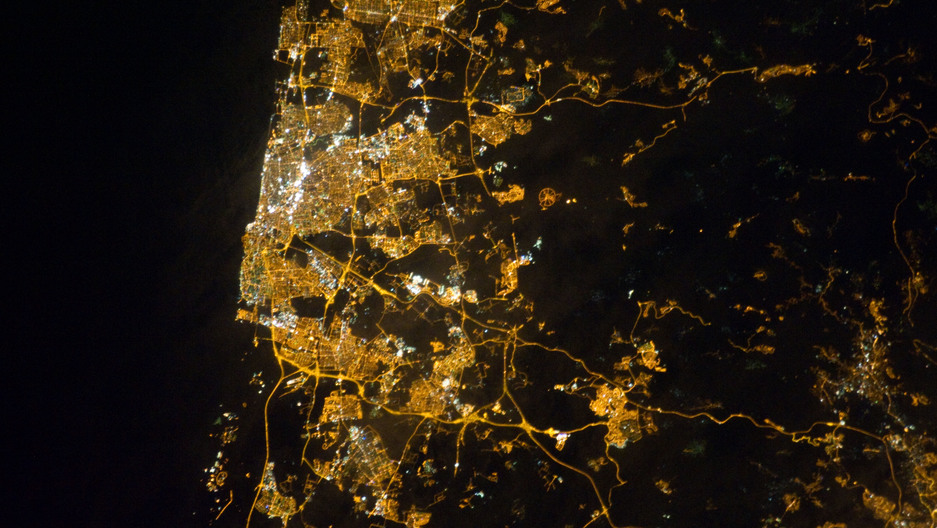 Israel, as seen here from space, and the Palestinians are no closer to peace — a situation any American president is unlikely to change. (Photo courtesy of NASA.)

Israel has been a regular topic of debate during the 2012 U.S. presidential election.

Barack Obama and Mitt Romney have both gone out of their way to express their commitment to Israel’s security. What they haven’t talked about much at all, though, is the Middle East peace process.

With no sign of peace talks between the Israelis and Palestinians coming back to life, the next administration will be faced with an old question: what to do about a conflict American presidents have expressed a desire to solve for decades?

The high-water mark for U.S. presidential involvement in Middle East peace making was probably Jimmy Carter’s role in brokering the Camp David Accords that led to the peace treaty between Egypt and Israel in 1979.

“Today, we celebrate a victory, not of a bloody military campaign, but of an inspiring peace campaign,” Carter said during a White House ceremony. “We must now demonstrate the advantages of peace and expand its benefits to encompass all those who have suffered so much in the Middle East.”

Other moments of apparent presidential success followed. There was the iconic handshake at the White House in 1993, orchestrated by Bill Clinton, between Palestinian leader Yasser Arafat and Israeli prime minister Yitzhak Rabin. The following year brought a historic peace agreement between Israel and Jordan.

But Yossi Alpher, a former Israeli intelligence official, says US presidents have rarely been the driving force toward peace — at least at first.

“By and large, the breakthrough between Israel and an Arab partner has happened without American involvement, without even American knowledge, in some cases, even against the wishes of the American administration,” Alpher said.

Carter and Clinton picked up the diplomatic momentum initiated by Israelis and Arabs. And once they got involved, Alpher said, they were indeed effective.

Going back to the aftermath of the 1967 Six Day War, American presidents have capitalized on the so-called special relationship between the United States and Israel.

“America is the one power in the world that can reassure the Israelis that it will provide the security that Israel needs to take a risk on peace,” said Eugene Rogan of St. Antony’s College at Oxford and author of The Arabs: A History.

The U.S. president has a role to play in Middle East peace making, Rogan said. But there is an inherent flaw at work, and it has to do with democracy.

“Politicians face a regular electoral cycle that has a much higher priority on their policies,” Rogan said. “Neither in Israel nor in the United States are politicians going to be able to take unpopular decisions with their electorate in the interest of securing Arab-Israeli peace.”

Take President Obama’s experience. In his first term, he reached out to the Arab world with a speech in Cairo and set a goal of solving the Israeli-Palestinian conflict once and for all. He succeeded in raising expectations. But something was missing.

Unlike in Carter and Clinton’s time, Israeli and Palestinian leaders had not created any momentum on their own. Obama backed off his original goal.

And that has not been lost on the Palestinian public.

On a hillside in the West Bank village of Silwad, several stunning new mansions with red-tiled roofs and handsome stonework are under construction. Looking on, village mayor Na’el Hamid explained that many families in the area have relatives in America. Most of the big new houses, in fact, are being built with funds from the U.S.

“The economy is moving here. And the investment from America is vital.” Hamid said. “It’s hard to overstate the economic ties between this village and the U.S.”

But Hamid is dismissive of American political support.

“Historically, we have not seen the U.S. support Palestinian self-determination. Investments are one thing, but no American president has given us much political support," he said.

The Palestinian leadership in the West Bank finds itself caught between that skepticism, which is shares, and its dependence on Washington. Palestinian Authority spokeswoman Nour Odeh said the West Bank authority might be frustrated, but it is not turning away from the American president, no matter who wins the election.

“Giving up on the president of the United States of America is not under consideration,” Odeh said. “We remain committed to having very positive relations with the United States and we remain hopeful that the United States will respect and uphold the principals that it stands for, including the universality of human rights.”

Israelis seem content with a laissez faire approach to the U.S. relationship: keep out of the peace process and stick with the Jewish State on security issues.

American and Israeli army officers posted near Tel Aviv recently took part in an air defense drill, described as the largest-ever joint U.S.-Israel military exercise. It was meant as a signal of President Obama’s commitment to Israel’s security.

Even so, many Israelis worry that Obama might use a second term to put pressure on Israel to make concessions to the Palestinians. Judging from this year’s campaign rhetoric, though, neither the president nor his Republican challenger has any real desire to revive the dormant Middle East peace process.