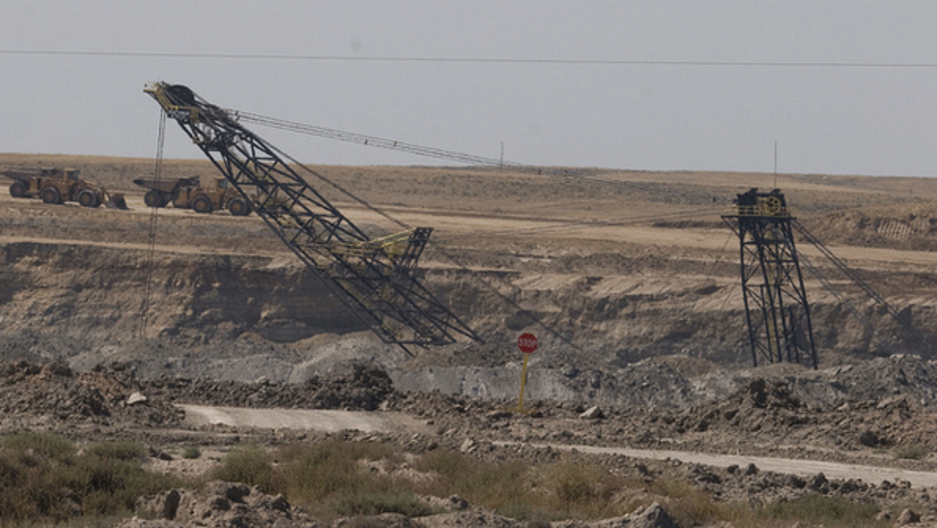 Coal from mines in Wyoming, like this open pit coal mine in the Powder Ridge Basin, may soon be bound for Asia. (Photo: Kimon Berlin)

Editor's Note: This story comes by way of EarthFix, a public radio collaborative in Washington state.

Kevin Ranker points his motorboat towards Cherry Point and guns the engine.

Ranker’s represents the San Juan Islands in the Washington State Senate. Along the coast, there's an oil refinery and an aluminum smelter off in the distance. Between them is a long stretch of tree-lined waterfront — but the trees may soon be gone.

This is the proposed site of the Gateway Pacific Terminal, what might one day become the largest coal export facility on the west coast of the United States. It would be big enough to handle 48 million tons of coal per year, roughly half the coal the entire country exports right now. Some 500 ships a year would pass through on the way to Asia.

Ranker spends a lot of time on the water. So do many of his constituents. He shares their fear that all of these ships moving back and forth will increase the likelihood of an oil spill.

Ranker’s not getting an answer to that question.

The coal companies have been good to Wyoming, sending millions of tax dollars into state and county coffers. But those companies aren’t based in Washington or Oregon, so Pacific Northwest states won’t see direct tax revenue.

Craig Cole, a spokesman for the Gateway Pacific Terminal, however, argues economic activity anywhere in the country is good for the entire country.

"I guess you could say that building cars in Detroit doesn’t help us but yes it does, because it strengthens the national economy," he said.

If all five terminals proposed in Washington and Oregon are built they would create hundreds of long-term jobs, plus several thousand workers employed during construction. The Association of Washington Businesses and several labor unions in Oregon and Washington have given their strong support for their proposal.

"I think if we’ve got something that can fuel jobs in our country, and fuel our economy and rebalance trade, we should take advantage of it," Cole said. "Right now we need to sell whatever we can sell, whether it’s a natural resource based commodity or whether it’s high tech."

Environmental groups say the full cost of exporting coal through the northwest outweighs the economic benefits. And that's not just pollution in the northwest. There's of course pollution in Asia, where the coal is eventually burned.

Richard Morse, a coal expert at the Program on Energy and Sustainable Development at Stanford University, says global coal consumption is expected to rise by 65 percent in the next 20 years.

"Coal is the single largest source of CO2 emissions, which makes it really the heart of the climate problem," he said.

Asia uses five billion tons of coal every year right now. Coal set to be exported from the Pacific Northwest would make up about two percent of that.

Are the emissions that come out of the West coast if they export that coal going to make or break climate change? No," Morse said. "Is how we deal with that going to set an important precedent for other fuels and future more comprehensive policy? Yes it is"

Washington Congressman Jim McDermott recently introduced legislation that would tax extracted coal. The revenue would reduce the national debt and help communities, like those in his home state, deal with the impacts of increased train and ship traffic from moving coal.

It’ll be a tough bill to pass.

For now, the opposing sides of the coal export debate in the Northwest are squaring off as the two largest proposed terminal projects enter the environmental review process.

Editor's note: A previous version of this story incorrectly stated what McDermott's bill would do. While he has introduced a bill to tax carbon that bill would not affect coal mining, directly. His "True Cost of Coal" act would fund the mitigation of any adverse effects from the shipping of coal.