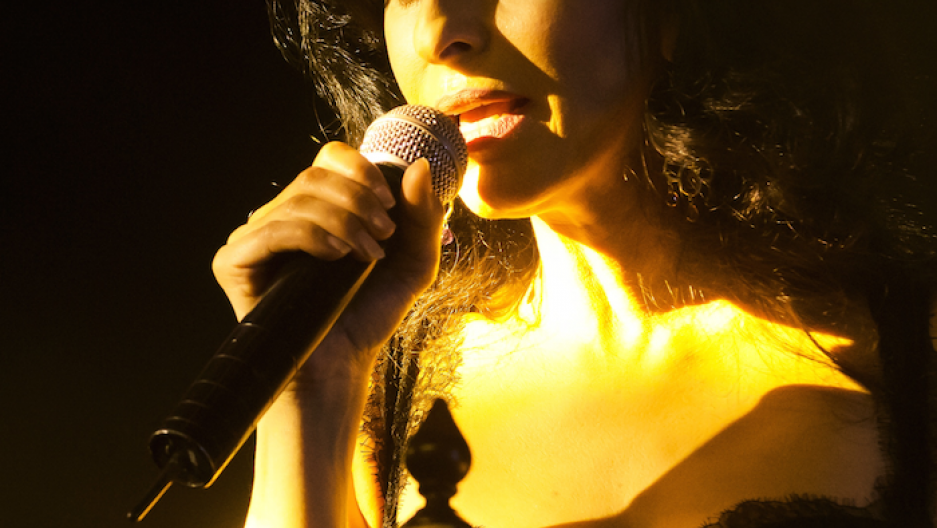 Rita Jahanforuz is an Israeli-born Jew of Iranian heritage. She's a popular singer that's created a controversy because of her choice of language. (Photo courtesy of Etty Trister Orgad.)

It's an interesting time to be an Iranian-Israeli pop star.

The standoff between Iran and Israel over Iran's nuclear program is one of the hottest global geo-political issues right now.

Rita Johanforuz, known to her fans as Rita, is one of Israel's biggest stars, and her new album My Joys mixes traditional Persian songs with electronic music, Central Asian flutes and strings, and Balkan brass. It’s gotten Rita a lot of attention because she sings several songs in Farsi, the language of Iran.

She was born in Iran, and her Jewish family emigrated to Israel when she was eight.

This kind of multicultural approach raises no American eyebrows. But Israel is different.

Jordan Elgrably of the Levantine Cultural Center in Los Angeles says the mere fact that Rita is an Israeli singing in Farsi makes this album political.

"It’s a political act if you’re an Israeli Jew and you choose to speak Arabic in public," Elgrably said. "Because (in Israel) the Arab culture is seen as the enemy culture. And now Iran is the enemy."

For musicologist Oded Erez of the University of California Los Angeles, Rita's new album reflects an important shift in Israeli culture. Hebrew has long been the glue that held this nation of immigrants together.

"The aim of the cultural project of Zionism was to create a monoculture, a homogeneous culture based on Hebrew and on Hebrew creation and art," Erez said.

More Israeli artists have been singing in other languages, but it's still a big deal for a major pop star like Rita to do so.

"Israel became much more of a plural culture." Erez said. "In this sense, Hebrewism is heavily challenged."

It's illegal in Iran to import an Israeli CD, but Rita's new songs got out through Farsi satellite channels and on the Internet. In Los Angeles, her fans cut across all demographics.

Atena Sarmast is a college student who works at a Persian bookstore on Westwood Avenue, the heart of "Tehrangeles." Her family is Muslim, and they left Tehran when she was 15.

"She's mixing the Eastern style with some Western style," Atena said of Rita, "which is very nice, and a lot of young generations like that.”

Rita herself insists that her music has no political agenda.

"I’m so ignorant in politics,” she said. “For millions of dollars and diamonds, I wouldn’t touch such a thing.”