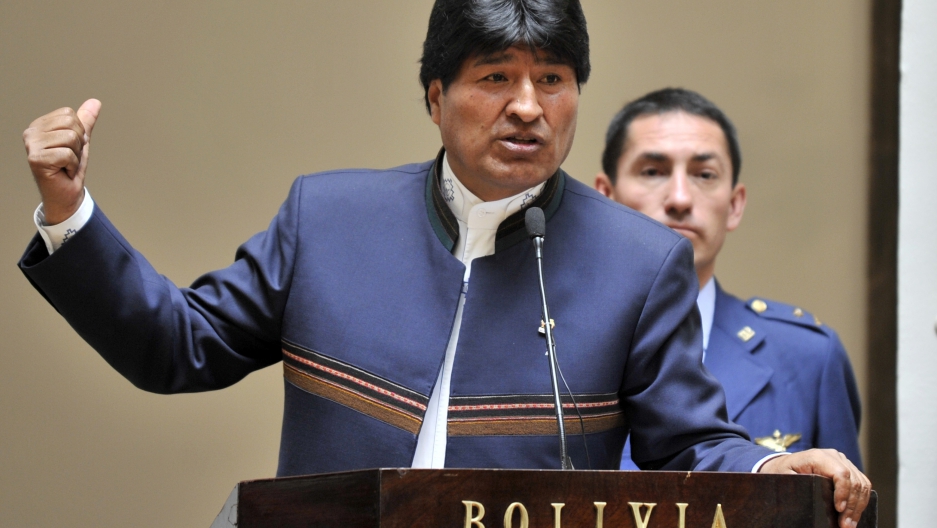 LIMA, Peru — Bolivian cybernauts are up in arms at suggestions by high officials in President Evo Morales’ administration that it may regulate social media.

Vice President Alvaro Garcia Linera appeared to both float the idea and attempt to intimidate government opponents when he suggested recently that online critics could be held accountable.

“I am always going online and I note down the first and last names of the people who make insults on Facebook or Twitter against our president,” Garcia warned in October.

Those comments were welcomed by other senior members of Morales’ Movement Towards Socialism party (MAS by its Spanish initials), who lauded Garcia for opening a “debate” on what uses of social media were permissible.

The remark prompted a backlash from groups as diverse as the conservative National Unity party to web users from some of Bolivia’s grittiest neighborhoods.

“We regret that when various opinions are voiced and are favorable to the government, it doesn’t matter if insults [against opponents] are used … no one censors or criticizes the situation, especially not the government,” a group of bloggers and internet users from El Alto, the vast shantytown on the outskirts of La Paz, said in a statement.

Morales’ administration, allied to Venezuelan President Hugo Chavez, is the latest populist, left-wing government in Latin America to be called out by journalists and rights groups for authoritarian tendencies.

But as online access grows, including to social media and blogs, government detractors have increasingly taken to these new platforms to air their sometimes fiery critiques – further testing the limits of free speech in countries such as Ecuador, Venezuela and now Bolivia.

Eric Torrico, media coordinator at Bolivian democracy nonprofit UNIR, told GlobalPost that the controversy was due partly to Morales’ “hypersensitivity” to criticism.

“There is a very high level of intolerance towards criticism by this government,” he said.  “They are very quick to dismiss any questioning without necessarily even weighing exactly what it is that is being said.”

The El Alto statement went on to note that Article 21 of Bolivia’s constitution guarantees freedom of expression. The group questioned Garcia’s claims that the internet was a tool of the elite, adding: “Every Bolivian has the right to access it whenever they want.”

The group also offered some advice to the government: “We suggest that all state authorities have their official, public [social media] accounts and in that way have another channel of online communication with the people.”

The firestorm appears to have given Morales pause for thought. “No, we never considered that. That was just twisted by the press,” the president told La Paz paper La Razon, in reference to the black list of digital dissenters his vice president claimed to be keeping.

According to Bolivia’s Redes Foundation, a nonprofit promoting internet access and quality, 1.7 million of the country’s 10 million population have Facebook accounts.

Nevertheless, the country remains one of the poorest in Latin America and using a computer or smartphone to access social media is beyond many Bolivians’ wildest dreams.

The row is not the first time Morales’ government has been accused of failing to respect freedom of expression. It has also been quick to prosecute critics using outdated laws that prevent “insults” against government officials.

Those prosecutions are now likely to be thrown out following a recent court ruling that the laws are unconstitutional.

And in August, according to the Committee to Protect Journalists, the president launched a criminal lawsuit against several local media outlets for accurately reporting his controversial — and politically clumsy — suggestion that citizens from a tropical lowland part of Bolivia were lazy.

More from GlobalPost: Left vs. indigenous of Latin America

Morales was using the 2010 Law Against Racism and All Other Forms of Discrimination, whose vague wording had concerned journalism and free speech groups.

That law was passed by the government partly in response to the racist abuse, including heckling, aimed at Morales himself — the first non-white president in Bolivia’s history despite the fact that the Andean nation is majority indigenous.

Born into an impoverished indigenous Aymara family, Morales rose to power as a combative leader of a coca growers’ union. His socialist policies — and possibly also his native identity — have threatened many of Bolivia’s largely white traditional elite.

“He has been a polemical character since long before he became president,” said Torrico, noting Morales’ tendency as a union leader to launch road blockades and use other confrontational tactics. “He was a person the private media did not like and he has reciprocated.”

But after the storm of criticism of the last few days, the president appears to have realized that developing a thick skin may be part of his job description as a democratic leader.

“We love to learn about what opponents are saying. They have the freedom to state opinions, even with many adjectives, but that is part of democracy,” Morales said in his interview with La Razon.

He added that his government needed to have “patience and more patience in the face of so many humiliations on social media.”