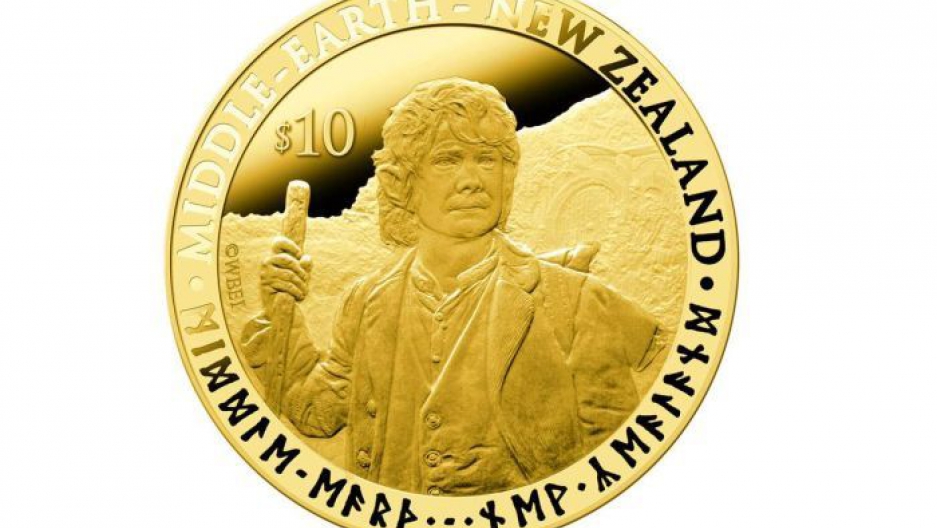 This NZ$10 coin, bearing the image of Bilbo Baggins, is legal tender in that country, but will set you back US$3,000 to buy.

Voracious fans of the "Lord of the Rings" and the "Hobbit" have been waiting for months for the release of "The Hobbit: An Unexpected Journey."

Of course, they'll have to wait a bit longer, as the film doesn't hit theaters until Dec. 14. But in the meantime, they'll have some promotions to enjoy.

Recently, Air New Zealand unveiled an in-flight safety video that features, well, hobbits. It's the traditional message all flyers are familiar with, but twisted in a more entertaining way.

But that's not all. Beginning Thursday, New Zealand will have legal tender featuring Hobbit words and images. And it's not funny money, but real money that can be used to buy and sell goods, with pictures of Hobbits and words in both English and Dwarvish.

"They're at high prices above face value," he explained, meaning that while they do have a value in actual terms, their value to collectors far exceeds what you could buy at the store with them. "They contain precious metal. The coin in particular that seems to be the most commonly seen is a NZ$10 coin, depicting one the hobbits from the movie."

That particular coin will set you back US$3,000 to get it in our pocket, he said. And while it does contain precious metal, that only makes it's actual value about US$1700.