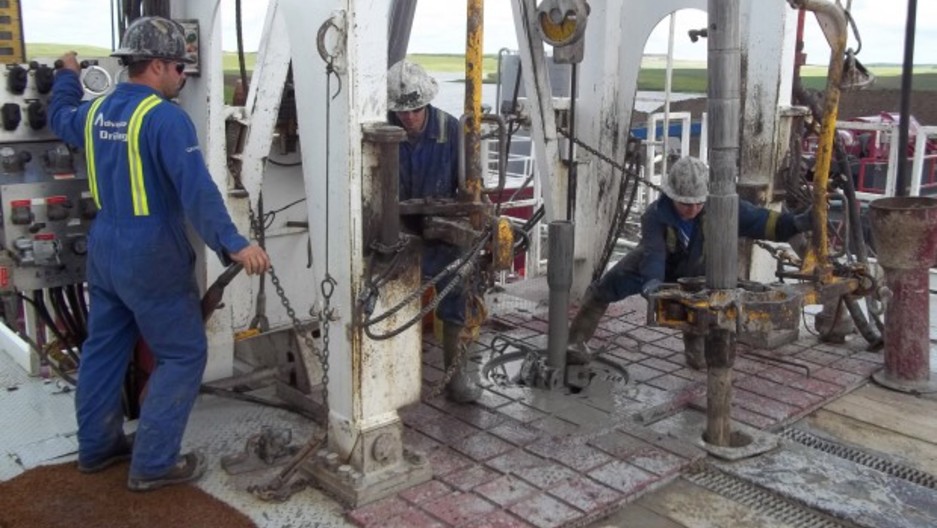 Craig Paradis (L) of Advance Drilling, operates the brake handle on a drilling rig for Crescent Point Energy as two roughnecks add a pipe extension to drill deeper into the Bakken formation near Oungre, Saskatchewan in this picture taken June 20, 2012. Exxon Mobil Corp will buy Denbury Resources Inc's properties in the Bakken shale for $1.6 billion and the exchange of some assets as the world's largest publicly traded energy company seeks to boost its crude oil output. The use of technologies like hydraulic fracturing and horizontal drilling have unlocked vast supplies of oil and gas. Output in the Bakken - which spans North Dakota, Montana and Canada - is expected to double to about 1.2 million barrels per day by 2015. Picture taken June 20, 2012. REUTERS/Rod Nickel (CANADA - Tags: ENERGY BUSINESS)

Share
How much does it cost to produce a barrel of oil? Ask an oilman and he'll likely give you a dollar amount. Ask somebody who studies what's called biophysical economics, which combines the disciplines of biology and economics, and you'll get a more nuanced response. "What does it cost in energy terms to bring a unit of energy into the economy? How much energy do you spend to get a barrel of oil out of the ground into a refinery, through a pipeline, and delivered?" said Eric Zencey, a fellow with the Gund Institute for Ecological Economics at the University of Vermont. Within the field, this calculation is called: Energy Return on Investment, or EROI. "Back in the 1920's, oil was paying off at 100-to-1," said Zencey. "It took one barrel of oil to extract, process, refine, ship and deliver 100 barrels of oil. That's a phenomenal rate of return. If you work out the percentage, that's a 10,000 percent rate of return." But that's not the rate of return today. Now, conventional oil production worldwide pays off at about a 20-to-1 ratio. And in Canada, where the oil comes from tar sands, it's closer to 5-to-1. "Renewable energy sources are paying off at higher rates, 12-to-1, 15-to-1, 17-to-1. That tells you right there, hmmmm, the age of oil should be over." A few problems with that though… Calculating these figures is complicated and estimates fluctuate. One researcher I spoke with, Carey King at the Center for International Energy and Environmental Policy at the University of Texas at Austin, said he can look at the same wind farm and calculate a payoff of 20-to-1 or 4-to-1. He can also make the numbers dance for oil too, by the way. It depends on if he factors in things like salaries, taxes, or subsidies. Or, how the energy is actually delivered to the source where it's used, or rather, the calculation for that. Even if oil is getting relatively more expensive, weaning ourselves off of it is not a matter of simply flipping a switch — the modern world runs on oil and gas. And there are powerful interests that would like to keep it that way. But we can't keep going like this much longer, said Nicolas Kosoy, an ecological economist at McGill University in Montreal. Eventually, our oil supplies will run dry. And as we dig up more fossil fuels, we emit more greenhouse gasses and add to the problem of climate change. Kosoy emphasizes we need to get serious about limiting our use of fossil fuels. "Either we do it now, and we do it systematically and organized, in an organized fashion. Or we will hit a hard boundary, and we will all have to reduce consumption, but as a must." Words like this don't make for popular campaign slogans. Modern economies are centered around growth and consumption, and that requires traditional sources of energy. I asked Kosoy what he thinks when he hears politicians arguing over who can best steer the economy back toward more robust growth. "Yeah, I listen to the debates, and I laugh at them because all of them are missing the point. Not only Obama and Mitt Romney, but I'm also talking about the South American left, (Hugo) Chavez. I lived in Venezuela for 20-odd years, and it's unreal. This is a finite planet and all of them are proposing as solutions more growth. C'mon, this is a joke." Still, Kosoy remains optimistic about the future. He's pushing to make systematic changes today by choice, rather in the future out of necessity.