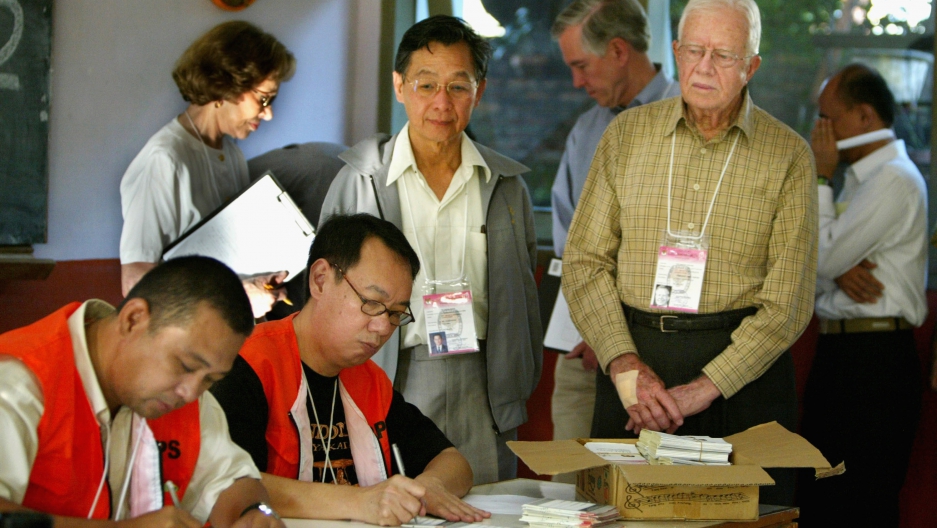 BOCA RATON, Fla. — “If Obama is re-elected, we will move more and more toward one world,” said Bonnie Re, an election worker in this southeastern Florida town.

The prospect did not excite the co-chair of the Boca Raton chapter of the Romney Express, an organization dedicated to helping the former Massachusetts governor become president of the United States.

America is special, she emphasized, and did not need to interact with other countries on the basis of equality. One act of Barack Obama’s really stuck in her craw.

“He called in UN election monitors. Can you imagine?”

It is not at all difficult to imagine international observers at US polling places. In fact, they have been here in every election since 2002, which means it was on a Republican president’s watch — George W. Bush, to be exact — that the practice began.

But it is not the bruised and battered United Nations that sends them. It is the Organization for Security and Co-operation in Europe (OSCE), a body of which the United States is a founding member. The US routinely sends observers to other countries’ elections — including to such political hotspots as France, the United Kingdom, and Canada.

The US is a federation, meaning that each state has a large degree of autonomy. And at least two of those states — Texas and Iowa — are having no truck with foreigners “interfering with the election process.”

Texas Secretary of State Gregg Abbott sent a strongly worded letter to Ambassador Daan Everts of the OSCE on Oct. 23, in which he made his position clear:

Did the governor of the great state of Texas rein in his hot-blooded secretary of state?

Just the opposite. Texas Gov. Rick Perry, himself a former presidential contender, promptly sent out a Tweet in which he heartily applauded the action.

No UN monitors/inspectors will be part of any TX election process; I commend @txsecofstate for swift action to clarify issue.

Now Iowa has followed suit. On Tuesday, Iowa Secretary of State Matt Shultz issued a statement saying that Iowa election officials are empowered under the law to arrest any unauthorized persons at polling places. This, he made clear, included OSCE officials.

“Iowa law is very specific about who is permitted at polling places, and there is no exception for members of this group,” wrote Shultz.

The OSCE, needless to say, is unhappy with the current face-off.

“The threat of criminal sanctions against OSCE/ODIHR observers is unacceptable,” said Ambassador Janez Lenarcic, the director of the Office of Democratic Institutions and Human Rights (ODIHR within the OSCE). “The United States, like all countries in the OSCE, has an obligation to invite ODIHR observers to observe its elections.”

Some are wondering what all the fuss is about — why are state officials so reluctant to allow foreign observers to do their jobs?

Abbott is happy to spell it out. The OSCE has met with organizations, specifically Project Vote, he said, that are protesting voter registration and ID laws that they say are discriminatory.

The question has elicited quite a bit of passion in this election campaign.

There is one school of thought — call it Republican — that wants to tighten voter ID requirements to prevent voter fraud. The other school — overwhelmingly inhabited by Democrats — thinks that the obsession with voter fraud is just a ploy to disenfranchise voters who might swing the election toward Obama next Tuesday.

This whole question is outlined brilliantly by Jane Mayer in the latest issue of the New Yorker, in a piece entitled “The Voter-Fraud Myth”:

“The vast majority of the lawmakers who have pushed for voter IDs have been Republicans. As Bill Clinton has put it, 'This is not rocket science. They are trying to make the 2012 electorate look more like the 2010 electorate' — when many young and minority voters stayed home — 'than the 2008 electorate.' Clinton said that the 'effort to limit the franchise' was the most determined 'since we got rid of the poll tax and all the other Jim Crow burdens on voting.'

Texas has had to go to court to have its voter ID laws upheld, and Abbott is not happy about it.

In August, a federal court struck down the Texas law, ruling that it would hurt turnout among minority voters and impose “strict, unforgiving burdens on the poor” by charging those voters who lack proper documentation fees to obtain election ID cards.

Texas did win a battle with Project Vote in September, when a federal court upheld some restrictions on voter registration.

“OSCE has identified voter ID laws as a barrier to the right to vote,” wrote Abbott. “But your opinion is legally irrelevant in the United States.”

Cynthia Alkon, an associate professor of law at the Texas Wesleyan University in Fort Worth, Texas, worked with the OSCE and served as an election observer in Albania. In an op-ed piece in the Fort Worth Star Telegram, she took Abbott to task for his reaction. The OSCE mission, she points out, is not large — just 57 observers for the entire US.

“Texas will not be inundated with foreigners ‘interfering’ at every polling place,” wrote Alkon. “At most, we will see a few highly professional and experienced observers who will watch and not interfere in the election process in any way."

She added, "I'm left to wonder, however, why anyone would be worried about a few folks wandering around watching an election. Vibrant democracies should not worry about conducting elections in the open for all to see. If Abbott is, as he says, proud of the ‘measures Texas has implemented to protect the integrity of elections’ he should be equally proud to have any and all come watch the process firsthand.”