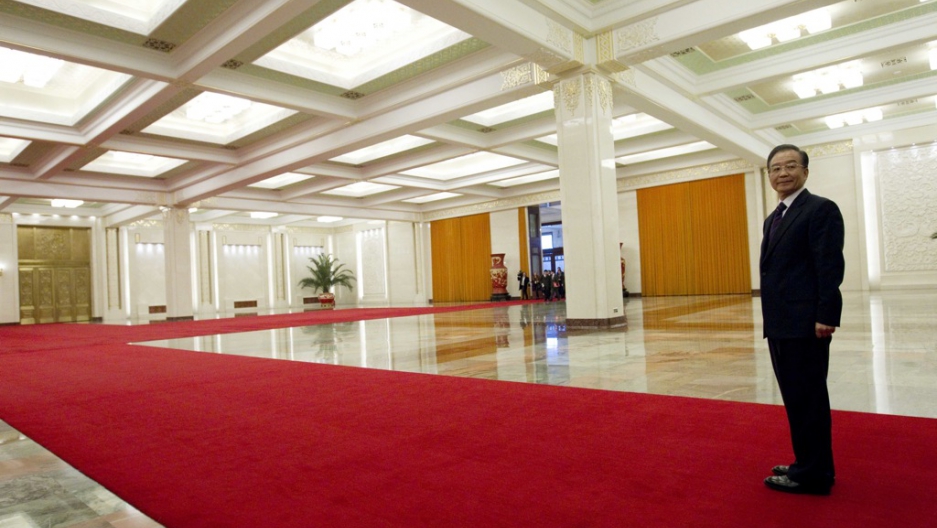 European Commission President José Manuel Barroso, and European Council President Herman Van Rompuy meet Chinese Premier Wen Jiabao at the Great Hall of the People during the European Union (EU)-China summit in Beijing, China 14 February 2012. Talks during the summit is likely to be focused on the eurozone debt crisis as China considers investing in a bailout fund to rescue debt-stricken states.
Credit: How Hwee Young
Share

HONG KONG — If Chinese Premier Wen Jiabao was hoping to make the story about his family’s $2.7 billion fortune go away, his response is only making things worse.

Almost a week after the New York Times published a blockbuster report detailing how relatives of “Grandpa Wen” — a popular man regularly portrayed as being above corruption — amassed incredible wealth during his tenure, the outgoing Chinese premier has kept the story alive by mounting an unprecedented, vigorous defense.

Whereas other Chinese officials simply ignore allegations of corruption, Wen’s family has hired two lawyers, issued a highly unusual public letter, and threatened to sue the Times for defamation. The Chinese government also got involved, with Hong Lei, the foreign ministry spokesman, indirectly denouncing the report as a “smear.”

“The so-called ‘hidden riches’ of Wen Jiabao’s family members in the New York Times’ report does not exist,” reads the Wen family’s statement. They “reserve the right to hold it [The New York Times] legally responsible.”

One overseas Chinese news site has reported that Wen even sent a letter to the Party requesting an investigation into his assets to prove that his hands were clean.

At a time of great vulnerability for the Chinese government, Wen’s extensive efforts to prop up his reputation may worsen the Communist Party’s crisis of legitimacy. Wen's self-defense not only sets a standard for transparency that other officials may find impossible to meet, it also keeps the public's focus on the Communist Party's gravest weakness: corruption.

"Public patience is running out because corruption, especially at the top, has become a key source of public discontent and unrest and poses a serious threat to one-party rule," Zhu Lijia, a professor at the Chinese Academy of Governance, told the South China Morning Post.

The irony of all this is that the Chinese censors were already doing a remarkably effective job of suppressing the New York Times report. The Times’ website was blocked within hours of the story being published; online censors have cut out nearly every imaginable nickname of Wen Jiabao and the New York Times (including “Twist Times,” which sounds like the newspaper’s name in Chinese.) Blocked terms include “Grandpa Wen,” “premier family,” and “2.7 billion.”

Still, comments from persistent Chinese web users manage to squeak through, if temporarily.

“The New York Times concerned itself again with China, but I don’t dare send out its contents,” wrote one user on Weibo, China's equivalent of Twitter.

“It turns out the family of officials get a lot of perks and money,” wrote another, who continued, saying that “because of censorship, I had to give up trying to forward it.”

Others were flippant, suggesting there was a connection between the New York Times report and the damage caused by Hurricane Sandy.

“The New York Times annoyed Fu Manchu, so Fu Manchu is now taking revenge on all of New York,” joked one.

While the $2.7 billion figure made waves in some Chinese circles, most ordinary people did not hear of it at all, and many of those who did simply shrugged — not because it didn't matter, but because everyone already believes Chinese officials are corrupt.

“The report is not surprising because the relationship between power and money is so close in China today,” wrote one Weibo user in a translation by Tea Leaf Nation.

This year has been rife with exposés of extortionate officials. On social media, Chinese dubbed one local official “Brother Watch" after he was discovered to be wearing more luxury watches than he could possibly afford on his salary. (He was forced out of office.) Another minor official in Guangdong was sacked after netizens furiously discovered that he owned 22 houses.

Still, even with Wen's unusually outspoken response, the effect of the Times story has been limited. Chinese-language newspapers outside of the People's Republic have taken a surprisingly skeptical attitude toward the report, uniformly suspecting the newspaper of being biased, or even a puppet of a conservative faction.

“This is really unthinkable that the Chinese state media and the overseas non-state Chinese-language media would converge on a major issue such as this one,” writes the author of the EastSouthNorthWest newsletter, which translates Chinese media. “So this is where we are — It is the New York Times on one side, and an alliance of strange bedfellows of Chinese state media and overseas Chinese dissident media on the other side.”

Nevertheless, elite political intellectuals recognize that the Party has entered a crisis of legitimacy, and are publicly calling for change. On Nov. 1, in the magazine Caijing, the deputy editor for a Communist Party mouthpiece urged officials to declare their assets and the assets of their families to rebuild their credibility.

"We can no longer act like an ostrich and be held hostage by corruption, we must have the courage to break out of this," he wrote.

If Wen Jiabao does declare his assets in public as a result of this scandal, it would likely have that effect. As one Weibo user gushed after reading the story,

“If the New York Times reported all the assets of past and current officials in an objective and thorough report, it would undoubtedly be a time bomb,” the user wrote.

“But if they reported on officials’ families overseas’ assets the same way, it would be like an atom bomb!”