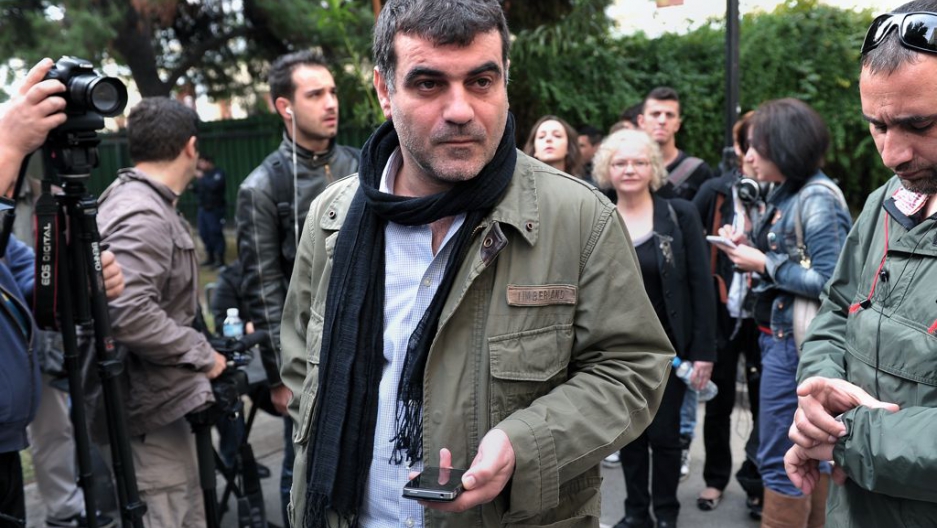 Kostas Vaxevanis outside the courtroom in Athens, Greece, on Nov. 1, 2012. The investigative reporter is on trial for publishing a list of Greeks who allegedly keep money in Swiss bank accounts.
Credit: LOUISA GOULIAMAKI
Share

Kostas Vaxevanis, a Greek journalist who named and shamed more than 2,000 alleged tax evaders, has been acquitted in his trial for breaching privacy.

"The court has ruled that you are innocent," Judge Malia Volika said Thursday afternoon after an 11-hour hearing, Agence France Presse reported.

Haris Economopoulos, Vaxevanis's attorney, argued that his client acted in the interest of the public.

“That overrode the issue of a potential breach of privacy," he said, the Financial Times reported. “It also helped that several people names in the list declared publicly that they did not feel their privacy had been violated."

Vaxevanis began his defense in Athens Thursday, just days after he was arrested, surrounded by fellow journalists and other supporters, Reuters reported.

"If I need to go to prison I will do," he told the BBC. "Not because I'm a hero, but to show the injustice of what is happening in Greece."

One of Greece's best known investigative reporters, Vaxevanis faced criminal charges of interfering with personal data after printing a list of 2,059 Greeks said to keep their wealth in Swiss bank accounts.

The names, which appeared in Vaxevanis's magazine Hot Doc on Saturday, had apparently been known to the Greek government since 2010.

They were originally given to French authorities by a former employee of HSBC bank in Switzerland. France's then finance minister, Christine Lagarde, passed them on to her Greek counterpart at the time, Giorgios Papakonstantinou.

Yet no investigation ever followed – because, some suspect, several of the people on the so-called "Lagarde List" are high-profile figures with links to the establishment, including former ministers, civil servants and an advisor to the Greek prime minister.

The decision to prosecute him in the first place alarmed journalists, press freedom campaigners and opposition politicians, says GlobalPost's Barry Neild, many of whom see it as part of a wider pattern of the erosion of individual freedoms in Greece.

The Financial Times, meanwhile, accuses Athens of "shooting the messenger." The paper says the authorities should be pursuing the people who cheat Greece's notoriously ineffectual tax system, not the journalists who bring it to light.