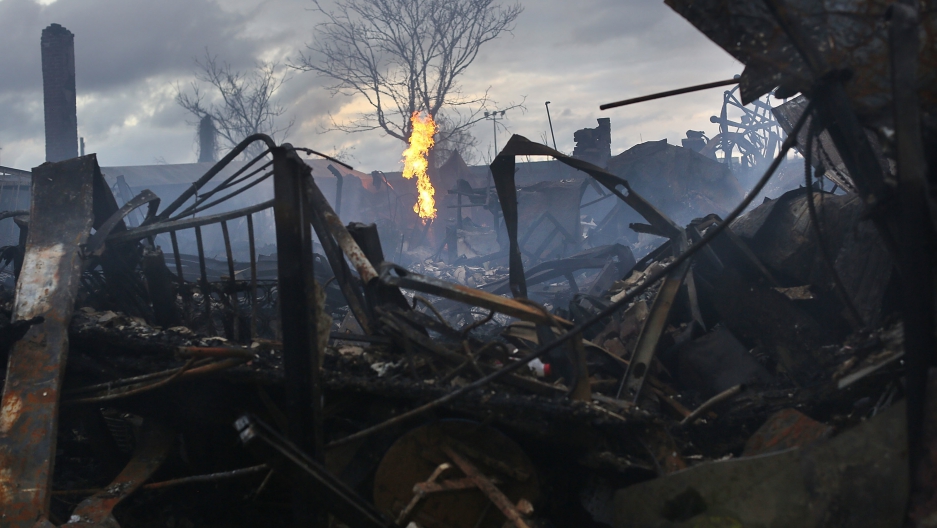 Homes and businesses burned down in the Rockaway, Queens during superstorm Sandy. Can New York City and other areas hit hard by the storm recover in time for the Nov. 6 election?
Credit: Spencer Platt
Share

The superstorm was also a killer. Its death toll in the United States and Canada is up to at least 74 people, with the storm claiming 71 lives in the Caribbean.

But Sandy’s berserker rage may not yet be exhausted: If the damage is severe enough, and if the states cannot get things under control quickly enough, the storm could still cause another major disruption: postponement of the 2012 presidential election.

Is it likely? Not in the least, but then again, what about this race has been normal or predictable?

The states have the final word on Election Day practices, and many of those hardest hit by Sandy have already begun to make adjustments, The Wall Street Journal reported.

Connecticut has extended its voter registration deadline by two days, to Thursday, and New York is considering changing and/or consolidating polling sites.

Pennsylvania and Maryland are making arrangements for paper ballots, in case batteries run out of juice in those areas where there is still no power by next Tuesday.

The states can also extend polling hours as they see fit, as long as they do not go beyond next Tuesday. If they do, then a whole new set of regulations kicks in.

The law on delaying elections for the nation’s highest office is murky at best. It appears, according to US Code Title 3, Chapter 1, paragraph 2, that:

“Whenever any state has held an election for the purpose of choosing electors, and has failed to make a choice on the day prescribed by law, the electors may be appointed on a subsequent day in such a manner as the legislature of such state may direct.”

The reference to “electors” is key here. It is only our individualistic self-centeredness that makes us think that we, as citizens, choose our president. In actual fact, that honor belongs to the Electoral College, currently made up of 538 members, which is the number of representatives in Congress plus the number of senators plus three extra for the District of Columbia.

When — if — we go to the polls on Nov. 6 and mark our ballots for Barack Obama or Mitt Romney, we are actually selecting the slate of electors from our state who will gather in Washington on Dec. 17 to cast their final and decisive vote for president.

So, if parts of Virginia, say, still do not have power by next Tuesday, or if New Jersey roads are impassable due to flooding, or if Illinois voters are too busy riding the waves to come to the polls, the state legislatures could just decide which electors they want to send to DC.

Some are already discussing the possible use of presidential emergency powers to postpone the vote; Congress, they say, could also step in and make some uber-decision.

But none of that may be necessary, according to Jack Maskell, a legislative attorney in the American Law Division of the Congressional Research Service,

Misperception, indeed. And here we were thinking the whole “one citizen, one vote” thing was real. Theoretically, we do not need a popular election at all.

It is highly improbable that any state will decide to postpone the election, and even less likely that President Obama will try to declare a national emergency that could delay the vote.

The legal challenges, partisan warfare and popular fury would be ruinous to the democratic process. The international monitors who are coming to observe the whole mess would have a good laugh, though.

Marginally more likely, but potentially even more bizarre, is the possibility of an Electoral College tie between Obama and Romney.

The two candidates are pretty much in a dead heat at this point. Polls fluctuate daily, with various margins of error, and about all that is clear is that nothing at all is clear in this election. It is, however, a mathematical possibility that each candidate could get 269 votes.

Such ties have happened exactly twice, although not very recently: in 1800, when Thomas Jefferson and Aaron Burr received the same number of electoral votes (Jefferson, of course, eventually won) and in 1824, when the House of Representatives was called upon to resolve a four-way split of electoral votes that had failed to identify a clear victor. This time the crown went to John Quincy Adams, despite the fact the Andrew Jackson actually got more votes in the original Electoral College ballot.

Again, it is highly improbable that it would ever come to this. But if it did, the election would be thrown to the House of Representatives. Each state would get one vote, making tiny Delaware’s voice just as loud as California’s.

Given the likely composition of the next Congress — not all that different from this one — it is not much of a mystery who would become president.

But wait, we’re not done with electoral absurdities yet.

While the House picks the president, the Senate chooses the vice president, according to its own lights, with no guarantee that the commander in chief and his No. 1 deputy would be from the same party.

The Senate, furthermore, is distinguished by the fact that the vice president — in this case, Joe Biden — is called upon to break any ties.

One pales at the thought of a Romney-Biden administration.

Of course, none of this will happen. But then no one would have forecast a Frankenstorm hitting the East Coast a week before Election Day now, would they?