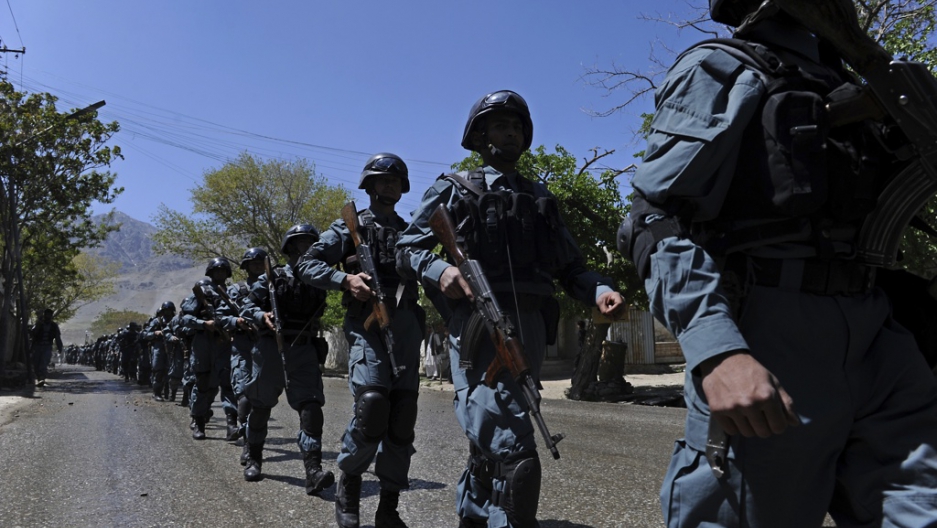 Afghan riot police march after a protest in the city of Charikar in Parwan province on April 18, 2011.
Credit: Shai Marai
Share

PARWAN, Afghanistan — Just a few miles from the biggest US military base in Afghanistan is the headquarters of Parwan's provincial governor.

More than a year after it was attacked by a team of suicide bombers, the buildings remain peppered with bullet holes, scarred by shrapnel and in some places stained with blood.

The compound in the town of Charikar is still open for business. There is no other option. But the damage stands as proof that even in once peaceful areas, the war has begun to leave an indelible mark.

Since the US invaded in 2001, Parawan has never been regarded as dangerous.

Bordering Kabul and situated on two highways that are essential transport links to the center and north of the country, it was traditionally seen as a stronghold of the anti-Taliban opposition.

Then the insurgents slowly began to appear.

First they were only in the mountains and a few remote valleys. Next they started to emerge elsewhere, their message of resistance in the name of Islam finding support across districts and among different ethnic groups.

Soon they felt confident enough to search cars in broad daylight, stage public executions and regularly attempt high-profile operations in Charikar, the provincial capital. Today they are active in roughly half of Parwan. Many people believe the situation will get worse.

As spokeswoman for the governor, Roshna Khalid was at work when the insurgents struck last summer. While the assault was unfolding, she saw "a very handsome man" in a police uniform who she did not initially realize was a suicide bomber.

"I don't know why he didn't shoot me because they shot all my other friends and colleagues," she said.

As the carnage unfolded, Khalid spent much of the time hiding in her office. She hunkered against a wall, reciting prayers and thinking about her family. By the time the attack was over, the insurgents had killed at least 22 people.

She has continued to receive threats ordering her to quit her job or face the consequences. Gunmen have also attempted to kidnap one of her sons.

Khalid admitted the local government is worried that Afghan security forces will be unable to cope if all conventional NATO combat troops exit the country as scheduled by the end of 2014.

"If they do not train and equip our police and army we will not be able to control the situation," she said. "Time is very short. Day by day the foreigners are saying they are leaving soon, so it depends on them."

Most of the trouble here can be traced to the region of Ghorband, which encompasses four of Parwan's 10 districts. In some places there, the Taliban essentially have full control, while in others they can move relatively freely around the inhospitable landscape.

The first obvious sign that the insurgents were in the ascendancy in this area came in June 2011. Jawad Zahak, a prominent official in neighboring Bamiyan province, was kidnapped and reportedly beheaded as he travelled on the main road through Ghorband. This route to central Afghanistan is now the scene of frequent attacks and even insurgent checkpoints.

Speaking at his small convenience store not far from Taliban territory, shopkeeper Abdul Samad said one of his relatives in the Afghan army had been killed in an ambush on the same highway when a rocket-propelled grenade blew up his truck.

"Day and night the situation is very bad there," he said.

A number of other noticeable incidents have occurred. Infamously, earlier this year a woman accused of adultery was executed in front of a crowd of villagers in Shinwari district. Her death was captured on video.

Some, however, welcome the militants' presence. Hassan, a Kabul University student from Ghorband, told GlobalPost the rebels had backing from ethnic Hazaras and Tajiks in the area, as well as Pashtuns.

"They have received a lot of support from local people. Before there was thieving, drug addicts, dog fighting and all these other illegal activities. Now none of this is happening and the Taliban have crushed them. No one commits injustice. This is not just coming from my mind, it is the truth from society," he said.

There are signs that the resistance is now taking root elsewhere in Parwan. Rockets are often shot at Bagram Air Field, the biggest US military installation in the country. According to the local government, they are fired from areas that are not part of Ghorband.

In one such assault, the plane of Gen. Martin Dempsey, Chairman of the US Joint Chiefs of Staff, was damaged as it waited on the ground in August. In similar circumstances, three members of the Afghan intelligence service were killed when their helicopter was hit.

The dangers in Parwan are not confined only to the insurgency, with many people here also possessing unlicensed guns and the threat of common criminality rising.

Zakia Sangin, a member of parliament for the province, said local security forces could "lose control of the center and the green areas" if they are not given better equipment before the foreign troops withdraw.

Unable to visit Ghorband for some time, she added that she now feels vulnerable even in Charikar. "When I stay in my own home I worry that I am not safe," she said.