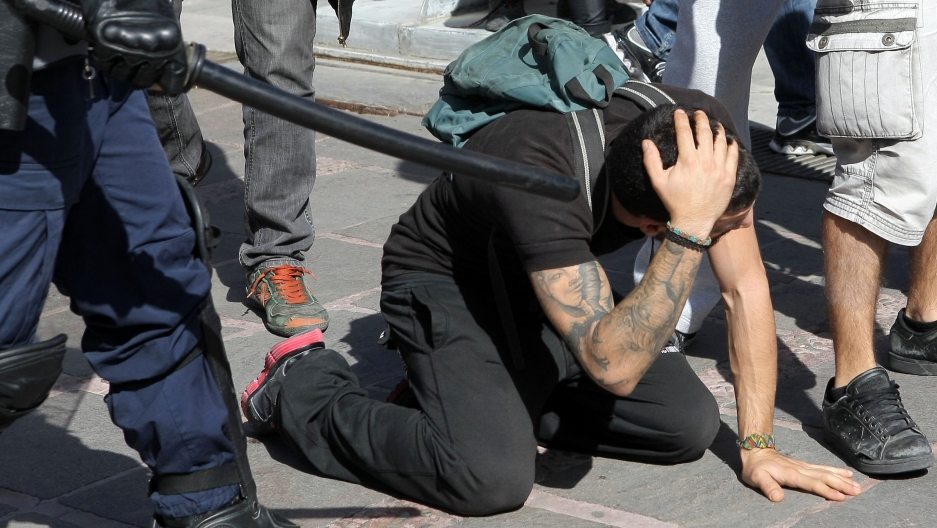 Some believe Kostas Vaxevanis's arrest will hurt Greece's reputation in the eyes of its international creditors.
Credit: Costas Metaxakis
Share

LONDON, UK — The Greek authorities have been accused of shooting the messenger by arresting a journalist for publishing a list of alleged tax cheats. They may have also shot themselves in the foot by drawing attention to a culture of fear that could help dissuade an already reluctant Europe from offering further financial help.

Kostas Vaxevanis was arrested on Sunday after his investigative Hot Doc magazine printed the names of more than 2,000 Greeks said to have Swiss bank accounts that could enable them to avoid paying billions of dollars in desperately needed taxes.

The nature of Vaxevanis’s arrest — which involved police storming a radio studio before hauling him off to face criminal charges for breach of privacy — has alarmed journalists and observers who say it bodes ill for freedom of speech in the debt-stricken country.

The arrest took place just before Greece finalized the latest terms of an international bailout with its euro zone creditors and the International Monetary Fund on Tuesday. It is now hoping to secure a two-year extension to push repayment deadlines back to 2016.

The 2,059 names Vaxevanis published featured on the “Lagarde list,” so-called because it was provided in 2010 by Christine Lagarde — now head of the IMF but then the French finance minister — to Greece’s then-Finance Minister Giorgos Papakonstantinou.

The list included wealthy Greeks accused of failing to declare assets stowed in their Swiss accounts. Despite a pledge to crack down on tax evasion to help shrink national debts that have reached in excess of $360 billion, the government did little with the list. One official even claimed to have lost it.

Vaxevanis, who could face up to two years in prison if convicted, told supporters who greeted him after a court appearance on Monday that he was acting in the public interest.

“Journalism is revealing the truth when everyone else is trying to hide it,” he said. “If anyone is accountable before the law, then it is those ministers who hid the list, lost it and said it didn’t exist. I only did my job. I am a journalist and I did my job.”

Prosecutors said Vaxevanis would be tried on Thursday on charges of interfering with sensitive personal data in a one-hearing procedure.

Journalists and press freedom campaigners raised more concerns on Monday after two television presenters were ordered off the air for criticizing a minister’s actions.

Many question why Vaxevanis is being prosecuted on criminal instead of civil charges. Contrasts have been drawn between his heavy handed arrest and the lax response by police after Illias Kasidiaris of the far-right Golden Dawn Party attacked two left-wing lawmakers on live television.

Dimitris Trimis, president of the Journalists’ Union of Athens Daily Newspapers, condemned the arrest and described the Greek judiciary as “hypocritical” for bringing an inquiry against a journalist he said had exposed the shortcomings of politicians and law enforcers.

The European Federation of Journalists called the arrest unfair, saying a daily newspaper, Ta Nea, subsequently published the list without consequence. “Mr. Vaxevanis was doing his job of a journalist working for the public good,” an EFJ statement said.

Some politicians have also voiced dismay. “It is unacceptable that in Greece, which has been on its knees in recent years, tax evaders are left undisturbed and those who conceal possible evasion are not prosecuted but those who make revelations are," opposition leader Alexis Tsipras said.

At the time of his arrest, Vaxevanis accused the authorities of willfully pursuing him instead of the truth about the country’s wealthy tax evaders. He said earlier that the police had turned a blind eye to possible threats against him.

A frequent critic of the establishment, Vaxevanis has made numerous enemies in high places. He claimed to have narrowly escaped an ambush at his home last month after his pet dogs disturbed four men trying to break in. It’s not clear whether the incident was politically motivated.

Although intimidation of journalists is rare in Greece, observers say officials regularly rely on indirect tactics to ensure they toe the line. Critics warn that such measures reflect deeper problems in a country that can ill afford to be seen as unstable.

“It’s certainly really scary,” said Anna Kandyla, a researcher with the independent Hellenic Foundation for European and Foreign Policy who co-authored of a study of press freedom in Greece.

Although Greece’s media was unshackled from state control in the 1980s, Kandyla says it remains under the authorities’ sway thanks to close ties with the political elite. As a result, mainstream media outlets operate within a culture of self-censorship that rarely gives air to dissent.

She said austerity measures imposed by the Greek government in 2009 as the country’s economy was collapsing have added to the pressure. With unemployment at a record 25 percent, many journalists are too afraid of losing their jobs to rock the boat.

The restraints on public spending, which the government has made increasingly tougher in order to qualify for successive bailouts totaling $415 billion and a substantial write down of private-sector debts, is also helping restrict freedoms throughout the rest of society, Kandyla says.

It’s partly driven by Greece’s need to convince its troika of creditors, including the European Union, the European Central Bank and the International Monetary Fund, that it is capable of pushing through the reforms they say are necessary for economic recovery.

The severity of the measures, which include drastic reductions in pensions and raising the retirement age to 67, have brought thousands onto the streets in demonstrations that have resulted in violent clashes with riot police.

In that climate, Vaxevanis’s arrest will heighten public suspicion of the authorities and risks staining the country’s reputation in the eyes of its creditors, Kandyla says.

“It has increased tensions over individual freedom at a time when the government is trying to show people abroad that its policies are widely supported,” she said.

“It doesn’t just stop at press freedom,” she concluded. “Freedoms are being limited in every aspect of life.”