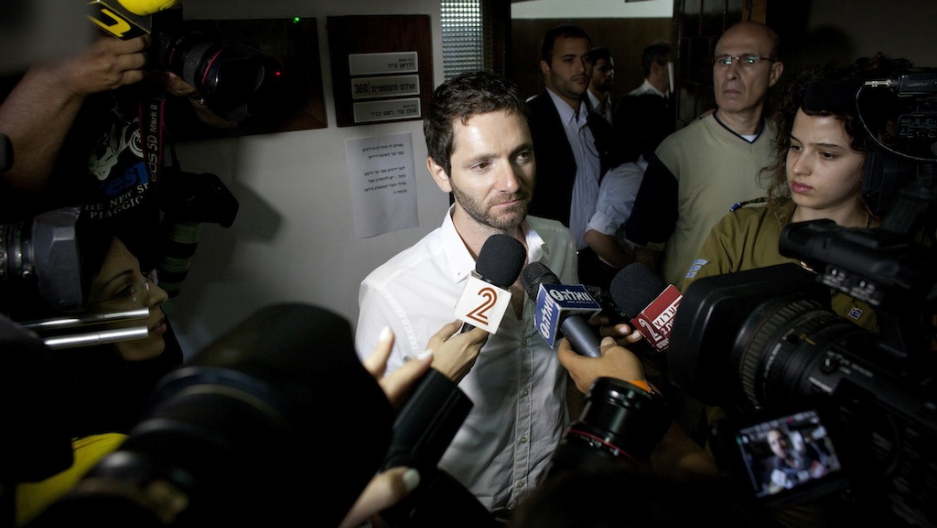 Haaretz journalist Uri Blau speaks to the media at the end of a court hearing in the Tel Aviv on July 24, 2012. Blau was convicted on possessing classified documents, and is an example of Israel's suppression of media freedom some rights groups are worried about.
Credit: OREN ZIV
Share

Military censorship and harassment of Palestinian journalists, as well as the prosecution of a journalist for publishing leaked military documents, have put Israel at number 92 on Reporters Without Borders' annual Press Freedom Index, below the Congo and Benin.

Although Israel generally has a robust and mostly free media, the country has no official freedom of speech or press laws. Some believe press freedom is inherent in the Human Dignity and Liberty section of the Basic Law of Israel (part of the country's constitution), but the issue of prior restraint by the military remains at issue. The Israeli Defense Forces' censorship arm has the ability to not only prosecute journalists, but it can shutter newspapers and media outlets both inside and outside the Occupied Territories.

In addition to these concerns, the Knesset passed a libel law last year (on the heels of the controversial boycott law) that allows libel suits to go forward without defendants having to prove damages, a move journalists and media watchers fear will contribute to self-censorship and deeply affect investigative journalism in one of the most newsworthy areas of the world.

It seems Israel is in a press freedom crisis these days, especially after Haaretz reporter Uri Blau was convicted of possessing classified documents in September.

One of Blau's legal representatives, Jack Hen, said to Haaretz, "This is a precedent-setting prosecution of a journalist for doing his job, according to which the public's right to know and freedom of the press were seriously damaged by the decision to put a journalist on trial for these reasons."

Israeli journalist Dimi Reider, in a damning op-ed for the New York Times, explained the impact of the Kamm-Blau situation:

The verdict sends several chilling messages. To young soldiers it says: shut up, even if you suspect your commanders of violating the law; they will go unpunished and you will go to jail if you leak. To the source it says: no one will protect you; don’t be a self-sacrificing fool. And to the journalist it says: know your place; cover what we tell you to cover, print our news releases, and keep within your bounds.

Blau accepted a plea bargain Sept. 3, and must do four months of community service. Kamm is serving 4.5 years in prison for the leak, which the military and the Israeli government said was espionage.

Besides targeting Israeli journalists, however, the IDF also regularly arrests Palestinians working in Israel and the West Bank.

On Oct. 10, a journalist reporting on demonstrations against West Bank settlement building, Mohammed Atallah al-Tamimi was taken into custody after soldiers raided his home in Ramallah.

The Committee to Protect Journalists reported, "Al-Tamimi was arrested and taken to an unknown location, news reports said. Authorities have not disclosed his whereabouts, condition, or the charges against him."

Al-Tamimi is the latest member of the Palestinian media to be targeted by the IDF just this year, after Sharif al-Rjoub (a reporter for al-Aqsa Radio) was detained at his home in June and Bahaa Khairi Moussa (the general director of the Palestine Prisoner Channel) was arrested and had his equipment confiscated in May. In April, the IDF raided Wattan TV, the only independent network in the Occupied Territories, and confiscated that equipment as well.

The CPJ has been calling for the IDF to return the broadcasting equipment, and Wattan's general manager flew to Washington, DC to beg American lawmakers to pressure Israel to return it as well.

"The loss of Wattan would tear a gaping hole in the already flimsy press freedom fabric of the Palestinian territories," wrote CPJ Deputy Director Robert Mahoney. "The Palestinian Authority in the West Bank and Hamas in Gaza each have their own affiliated television channel, which serves up suitably bland news fare. Wattan, by contrast, has angered the Palestinian power and money elites as well as Israel with its probing coverage since being founded by three civil society groups in 1996."

Israel may continue to slide down the scale of countries that are unfriendly to journalists, and further down the rankings of the Press Freedom Index if it does not correct these abuses and end prior restraint.

This is part of a series by the RIGHTS blog on press freedom around the world.