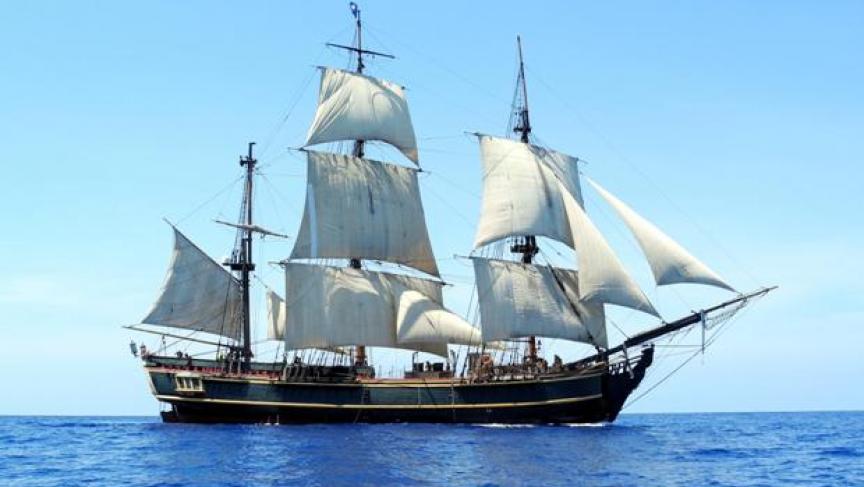 The U.S. Coast Guard continues to search for the captain of the tall ship, HMS Bounty, which floundered on Monday off North Carolina’s Cape Hatteras

The ship ran into trouble as the crew tried to escape Hurricane Sandy’s fury, causing the entire crew to abandon ship. Of the ship's 16 crew members, 14 were rescued Monday morning. Another, a woman, was found later in the day, alive, but succumbed to her injuries after being rescued.

The ship's captain remains unaccounted for, while the ship itself is reported to have sunk.

The HMS Bounty was built for MGM studios in 1960 for the classic movie, “Mutiny on the Bounty,” starring Marlon Brando.

It was built according to the plans of the original 18th century ship.

The Bounty also appeared in one version of Treasure Island, and “Pirates of the Caribbean: Dead Man’s Chest.”

For the last 20 years or so, it’s served as an educational vessel.

Sailors say heading out to sea in a storm is quite normal.

“Ships are meant to sail,” said one former sailor, Kelsey Freeman. “And they generally are going to float a lot better when they’re out to sea than if they’re tied to a dock.”

In a storm like this, he says, where the waters rise because of a storm surge, you have to leave extra slack on the ropes. As a result, in port, the ship will “move around a lot and probably dash itself to bits on the rocks.”

Looking at the map, it seems the Bounty just didn’t have enough room to skirt the storm, he said.

But the Bounty encountered a more critical problem according to the ship’s official Facebook page. It lost power.

“If your only pumps are electrically based and you lose your electricity, then it becomes an issue of when you will sink, not if,” he said.