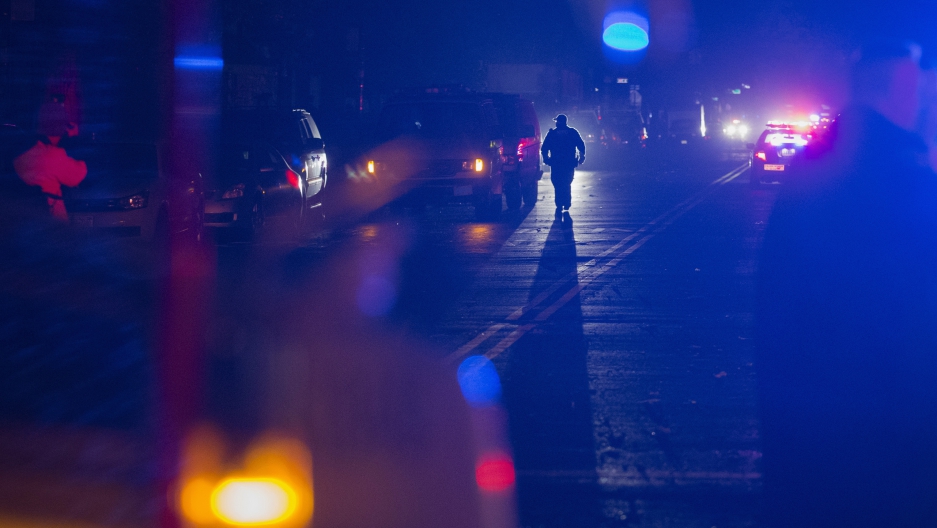 A police officer patrols a neighborhood hit by a power outage in New York City Oct. 29, 2012. Consolidated Edison said it shut off power to part of Lower Manhattan to protect equipment and allow for quicker restoration. (Photo by Adrees Latif/Reuters.)

New York City is wet and, in many places, powerless. West Virginia and parts of Kentucky, Pennsylvania Ohio and Virginia were being buffeted by winds and snow, even blizzard like conditions in some areas.

It's all part of the enduring aftermath of Hurricane Sandy, the "Frankenstorm" that roared ashore in New Jersey Monday evening and left at least 16 U.S. deaths and as-yet-uncalculated destruction in its path. Some eight million people across the region were without power, with projections for restoration stretching for upwards of a week.

In Atlantic City, which bore the early brunt of the storm, parts of the city's historic boardwalk were broken apart by a storm surge that inundated downtown streets. The New Jersey National Guard was activated to help with evacuations. Atlantic City reported more than 14 inches of rain.

New York City was crippled by record-breaking storm surge, which filled subway tunnels, vehicle tunnels and shutdown bridges into the city. At least 80 homes were burned, the Wall Street Journal reported, after a flooded neighborhood in the Queens borough caught fire and firefighters were hampered in their response by flood waters and unable to find a usable water supply. A Consolidated Edison power plant was damaged during the storm, plunging a quarter of a million people into darkness — adding to numbers of people who had already proactively had their power cut in advance of the flooding, in hopes of preserving the equipment.

According to the Associated Press, the 16 deaths included New York, New Jersey and Pennsylvania, where three people each have died, as well as two in Connecticut, and one each in Maryland, North Carolina and West Virginia. Three of the deceased are reported to be children. The storm has claimed scores of lives in the Caribbean already.

Airports across the northeast, including New York City's three main airports, LaGuardia, JFK and Newark, were shutdown, with no specific projections for when they would reopen. Estimates are expected later Tuesday. According to FlightAware.com, more than 15,000 flights have been canceled because of the storm.

Rescues were continuing for people who found themselves in precarious situations from rising water. And while the storm surge was the most damaging force Monday night, the focus shift to flash flooding and blizzard like conditions as Sandy's post-tropical remains, still packing winds upwards of 60 mph, head west before turning north-northeast toward Canada and back toward the northeast United States.