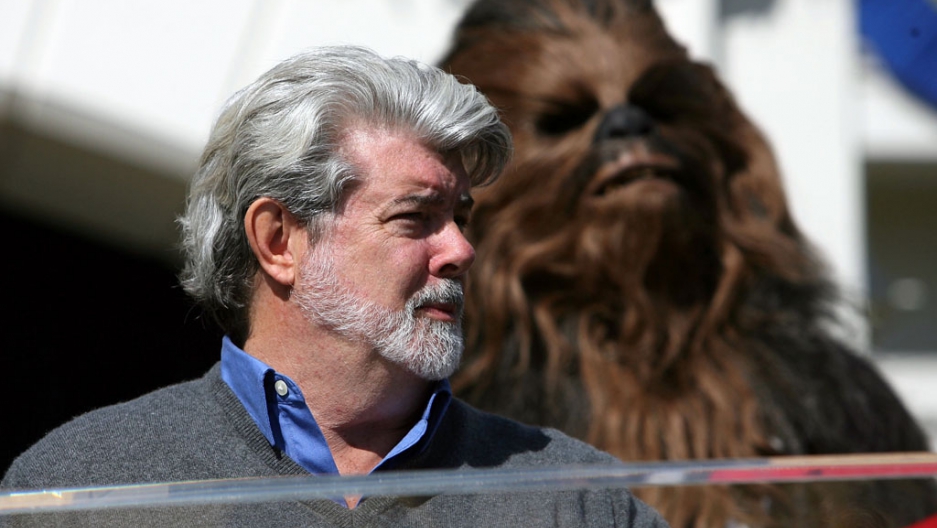 George Lucas (left) and his "Star Wars" character Chewbacca attend the unveiling of the Grand Marshal for the 2007 Tournament of Roses Parade at Tournament House on September 19, 2006 in Pasadena, California.
Credit: Michael Buckner
Share

Careful, George, you’re going to make us all cry. You might even make us forget Jar Jar Binks.

George Lucas announced today that he’s selling Lucasfilm — along with the rights to Star Wars and Indiana Jones — to Disney in a blockbuster $4.05-billion deal.

To a generation of Fan Boys (and Girls), Lucas’s move might come as a shock. The way he’s talking, it sounds like George has darkened his light saber right in the middle of a Darth Vader death duel.

“It’s now time for me to pass Star Wars on to a new generation of filmmakers,” he said on the Disney website.

“I’ve always believed that Star Wars could live beyond me, and I thought it was important to set up the transition during my lifetime. I’m confident that with Lucasfilm under the leadership of Kathleen Kennedy, and having a new home within the Disney organization, Star Wars will certainly live on and flourish for many generations to come.”

Man, that sounds so sad.

But does he have a point? He did keep us waiting for, like, ever between "Return of the Jedi" and "The Phantom Menace."

OK, it was only 16 years (almost exactly) between the films. Then, once we got there, we had that whole Jar Jar Binks thing to reconcile.

Really, the “first” three episodes — while dazzling in some regards — were downright disappointing in others.

Now that we think of it, perhaps it is time for George to pass the baton. But to Disney? Is that cool with you? M-I-C, K-E-Y?

Of course, you can’t blame the man. He’s 68 now, and the deal gives him about $2 billion in cash plus 40 million Disney shares.

It also makes him a creative consultant on the new films, which apparently will come fast and furious.

There’s so much promise behind that little phrase.

For Disney, this is a steal. Not only do they get Star Wars, they also get Indiana Jones and THX1138.

OK, we’re kidding about that last one.

Really, the meat of this little, billion-dollar transaction comes in the Lucasfilm properties: LucasArts, Industrial Light & Magic and Skywalker Sound.

Those are some sweet plums.

“Lucasfilm reflects the extraordinary passion, vision, and storytelling of its founder, George Lucas,” said Robert A. Iger, chairman and CEO of The Walt Disney Company.

“This transaction combines a world-class portfolio of content including Star Wars, one of the greatest family entertainment franchises of all time, with Disney’s unique and unparalleled creativity across multiple platforms, businesses, and markets to generate sustained growth and drive significant long-term value.”

You bet your Mouse ears, it does.

After Episode 7 in 2015 (that’s like three years from now!), you can expect movies every two or three years. Live-action movies, no less. No more "Clone Wars" weirdness.

Then, with Disney World and Disneyland, don’t be surprised to see theme parks, rides and merchandising out the yin-yang.

Now — maybe, finally, with any luck — Chewbacca will get that starring role we all know he deserves.

Still, George, it's sad to see you leave, although we look forward to you crossing over and becoming one with The Force, Obi-Wan, Anakin and Yoda.

Yes, you read that correctly. George Lucas is selling Star Wars to Disney. The Mouse is also getting Indiana Jones, plus all those sweet LucasFilm properties like Industrial Light and Magic, Skywalker Sound and LucasArts.
Disney to Acquire LucasfilmGreat news! The Force is coming to Disney! Bob Iger just announced that The Walt Disney Company is acquiring Lucasfilm - the global enter...
George says it's time to entrust Star Wars to a younger generation, plus he wanted to solidify the deal in his lifetime. Sounds like he's ready to drop his lightsaber and join Yoda on the other side, doesn't it?
More on Disney deal with Lucasfilm: Star Wars Episodes 7, 8 & 9 planned; George Lucas passes firm "to new generation" http://bbc.in/T29LbNBBC Breaking News
StarWars.com | HomeGeorge Lucas and Kathleen Kennedy discuss the future of Star Wars.
Really, though, this moment was likely inevitable. George didn't really appear ... how should I say this? ... "ready" for another Star Wars trilogy. Not after Episodes 1, 2 and 3 received lukewarm reviews.
There will be a Star Wars 7. And people thought Hurricane Sandy was going to be the biggest disaster announced this week.The Dark Lord
Star Wars Episode VII - The Parent It's A Trap! #DisneyStarWarsSimon Pegg
Nuff saidDon McNasty Calamari
Can't believe there is going to be a third Star Wars trilogy..just let it be!Joe Frank
Let's get real, #GeorgeLucas made 3 good films: THX, American Graffiti, and Star Wars. He did not direct Empire. The rest are shit.Martian Death Ray
See. Not everyone is convinced this will turn out. But those are the naysayers, right?
RT @tubes33: Star Wars coming back could be the best thing ever!!!!!!! #lukeiamyourfatherbryce johnson
Can't believe there's gonna be another star wars film, i mean what's it gonna be based on this time?David Knight
Ok, there are a lot of them, but there are those who still believe.
RT @CoreyTaylorRock: Ahem...Disney. Lucas. Star Wars. Episode 7.Anyone else terrified?Fuck... #leavemychildhoodalonePai_Pangu
Somewhere.
RT @tayloramesmusic: Just found out Disney is buying Lucasfilms and plans to make Star Wars 7... http://pic.twitter.com/BpM8PfrXaira nicole R.N. :D
Oh, come on! It's time to think positively.
There's gonna be a new Star Wars movie in 2015!!!olesia
Finally.
RT @FrankInStereo: I really really hope they give Guillermo del Toro whatever he wants to direct at least Star Wars: Episode 7.Katherine
That's the spirit. Maybe we'll even get some cross promotion.
Disney buy Lucas studio And announce star wars VII in 2015 #disney #starwars #moviecattias.photos
RT @FrasesFaceTwit: Las primeras imágenes del nuevo elenco de Star Wars 7. http://pic.twitter.com/omt33iThMayi
Whoa, man. This isn't going so well. There must be someway to back away gracefully from all of this. Someone, anyone, help me out.
Star wars episode 7 in 2015!! #soexcitedNoah Garza
Thank you.

More from GlobalPost: Happy Star Wars Day, May the 4th be with you