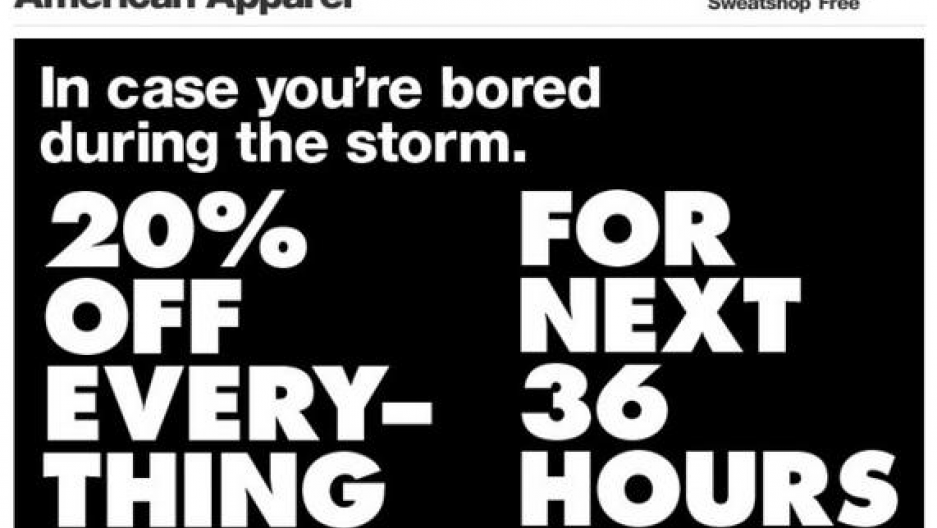 Do life-threatening cyclones make you want to shop?
Share

That's the only explanation we can come up with for the LA-based retailer's spectacularly misjudged decision to tie a promotional offer to a hurricane.

Yep, the company emailed customers Monday night to offer them 20 percent off everything for the next 36 hours – though only if they were in one of the nine eastern states expected to be hit hardest by super-storm Sandy.

According to a screenshot posted by Mashable, the advert opened: "In case you're bored during the storm." And in case you'd rather shop for leggings than, y'know, try not to drown.

The reality was a lot less pretty: at least 33 people dead, some six million without power, and damage to the tune of an estimated $20 billion.

American Apparel's taste fail did not go down well with Twitter (see below), with many users calling for a boycott and others advising the company to donate "20 percent off everything" to the American Red Cross.

The ad even helped inspire a debate about the ethics and effectiveness of "newsjacking," the term coined by marketing guru David Meerman Scott to describe "the process by which you inject your ideas or angles into breaking news, in real-time, in order to generate media coverage for yourself or your business."

American Apparel didn't immediately reply to Mashable's request to comment, and at the time of writing had not posted a response online.

But we wouldn't be surprised if its sales figures – or possibly its marketing peeps – were Hurricane Sandy's latest victims. Excuse us if we don't feel too sorry for them.