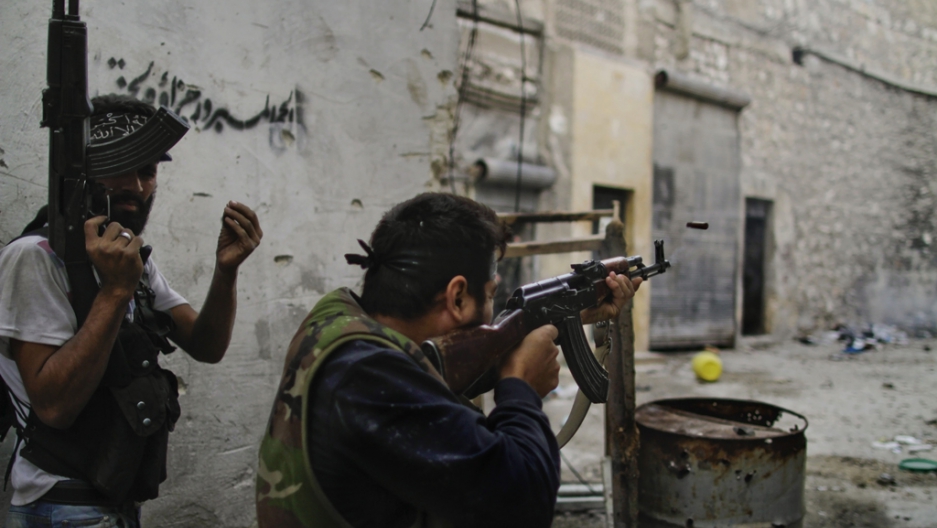 Free Syria Army (FSA) fire towards regime loyalist soldiers during a battle to dislodge a sniper from its position overlooking the two main roads in the neighbourhood of Askar in Syria's northern city of Aleppo on October 24, 2012.
Credit: AFP
Share

It was supposed to be a truce—but that's not how it happened. A UN-backed ceasefire, coinciding with the Eid al-Adha holiday, theoretically would have brought about at least a lull in the fighting between Syrian government forces and anti-government rebels.

But as reports since Friday indicated, neither side seemed particularly interested in honoring the terms of the truce, as Syrian government forces launched a brutal air assualt on Damascus, one of the worst attacks since the start of the Syrian Civil War, according to the Associated Press.

Reuters reports Syrian President Bashar al-Assad's forces had attempted to storm the suburb earlier in the week but had been ultimately unsuccessful, perhaps prompting the renewed attack, while AP reports that around 110 people were likely killed on Sunday in the attacks. That number of casualties is not far off from Syria's twisted "usual."

Around 150 people were killed on Friday in the political violence, the first day of the so-called truce, primarily in the cities of Damascus, Aleppo, Idlib, Deraa, Homs, and Ham.

The failure of the ceasefire bears out the limited expectations of many rebels, reported GlobalPost's Tracy Shelton on Thursday from Atmeh:

"Here, everyone is pretty much saying they don't trust it.... It's pretty difficult in any conflict to trust the enemy is going to agree to or actually follow a ceasefire," she said.

The renewed violence had led some international observers to question the validity of the truce concept itself — perhaps not a particularly compelling one if neither side is interested in complying.

Zeina Karam of the Associated Press concluded that the willful flouting of the ceasefire represented a "sobering reflection of the international community's inability to ease 19 months of bloodshed in Syria."

International peace envoy Lakhdar Brahimi, who initially called for the truce, told AFP that the failure of the stalemate will not staunch his resolve to find a solution to the violence. He plans to present new proposals opposing Assad to the UN Security Council in November.

Brahimi follows in the frustrated footsteps of preceding peace envoy and former UN General Secretary Kofi Annan, who was forced to give up on his six-point-peace plan in the face of intractable violence in Syria.