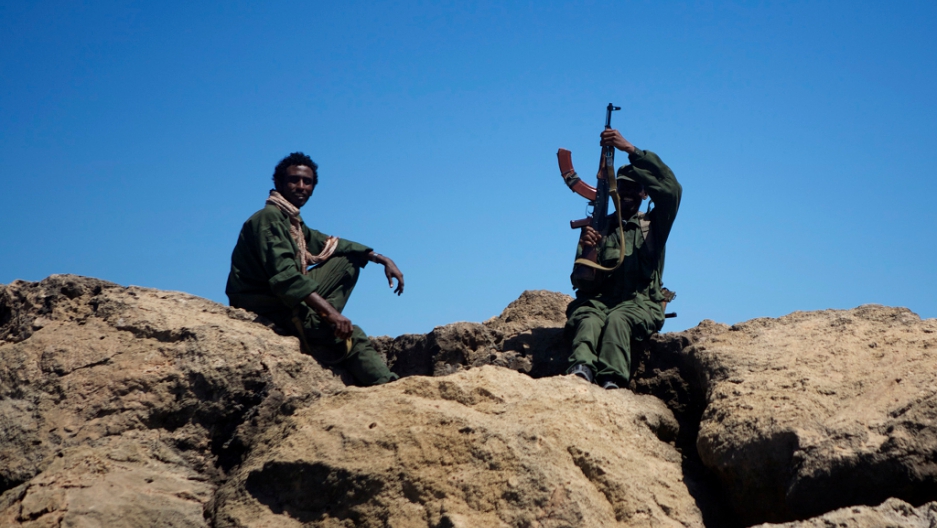 KISMAYO, Somalia ― Kismayo’s southern entrance is flanked by pile after vast pile of charcoal, bagged and stacked in towering blocks on either side of the asphalt road.

These stalled shipments now threaten to undermine hopes of a lasting peace in Somalia.

Al Shabaab, Somalia’s Al Qaeda-styled militant organization, withdrew from Kismayo late last month as an international military force moved in. It was the group’s last of a string of retreats that began 14 months ago in Mogadishu, Somalia’s capital.

It’s been a dramatic turnaround for Al Shabaab, which just over a year ago had nearly full control of the capital and much of the country’s hinterlands. Since its withdrawal from Mogadishu, the city has experienced something of a revival, at least by Somali standards.

More from GlobalPost: In Depth: The new Mogadishu

Whether or not Kismayo, a coastal economic center in the country’s south, can do the same is almost entirely dependent on the tens of millions of dollars worth of charcoal laying in wait at its port.

It was charcoal that once helped fund Al Shabaab. The UN estimates that at its height, Al Shabaab was taking in $50 million a year in port revenues from Kismayo, a third of which came from charcoal. As a result, in February, the UN Security Council placed an embargo on its sale and export.

“The economy of this city is 90 percent charcoal,” Sheikh Ahmed Madobe, the former governor of Kismayo, militia commander and regional powerbroker, told GlobalPost.

With the departure of Al Shabaab and since the charcoal “cannot be returned to the trees,” Madobe argued that the ban should be lifted and the coal sold off. Local businessmen, who have lost millions as a result of the embargo, are making the same argument.

A group of 20 business leaders gathered in a warehouse last week at the once-busy deep-water port to put their concerns to Kismayo’s new military rulers. The military now occupying the city is made up of the Kenyan army, operating under the banner of the African Union Mission in Somalia (AMISOM), the new Somali National Army (SNA) and Madobe’s Ras Kamboni Brigades (RKB) militia.

They asked for a seven-month suspension of the charcoal ban to allow them to sell off the stockpile.

“Kismayo has been one of the hotspots for the conflict for the last 21 years. We have not had any government support or any other assistance, so charcoal has been the main source of livelihoods,” said a businessman who did not want to be named because he maintains trade links in both government and Al Shabaab territory.

“When the charcoal trade stops everyone suffers, from the top to the bottom of society,” he said.

More from GlobalPost: In Depth: Al Qaeda in Africa

Officials worry that if the people are suffering, the winning of hearts and minds by an occupying force will be difficult. The charcoal impasse could make enemies out of the town’s traders, giving an opening to Al Shabaab and renewing the potential for conflict.

“If we do not solve the charcoal issue it will make serious problems for us, especially in security,” admitted one Kenyan officer.

Ultimately, it falls to the UN Security Council to lift the embargo. Given the UN bureaucracy and the issues the Security Council already has on its plate, this one is unlikely to come up anytime soon.

Even if the Security Council does turn its attention to the charcoal embargo, there’s no guarantee it would lift the ban. There’s no mechanism in place to prevent the profits from finding their way back to Al Shabaab.

Although Al Shabaab no longer controls Kismayo, no one believes the militants are altogether gone. Its fighters were not defeated, they withdrew. Authorities believe many of them have melted into the civilian population and still pose a threat.

Brig. Anthony Ngere, a commander of the 4,000-strong Kenyan contingent, said that suicide bombers, grenade attacks, improvised explosives, snipers and ambushes were all high on his list of concerns.  The fear of Al Shabaab’s return is palpable among the city’s residents.

“We are still living in terror that Al Shabaab will make a comeback,” said one man who did not want to be identified. “They are still here, hiding among the people. They can kill anyone anytime.”

That leaves Kismayo in a precarious position.

For now, the month-old peace is being kept in place by the strong show of military force. Kenyan troops patrol the town in armored cars, monitoring everything between their base at the airport and the harbor. Somali soldiers and militiamen man the streets.

On a recent morning, just three ships unloaded their cargo in the once frenetic port. With no charcoal to carry, they would return to Dubai empty.