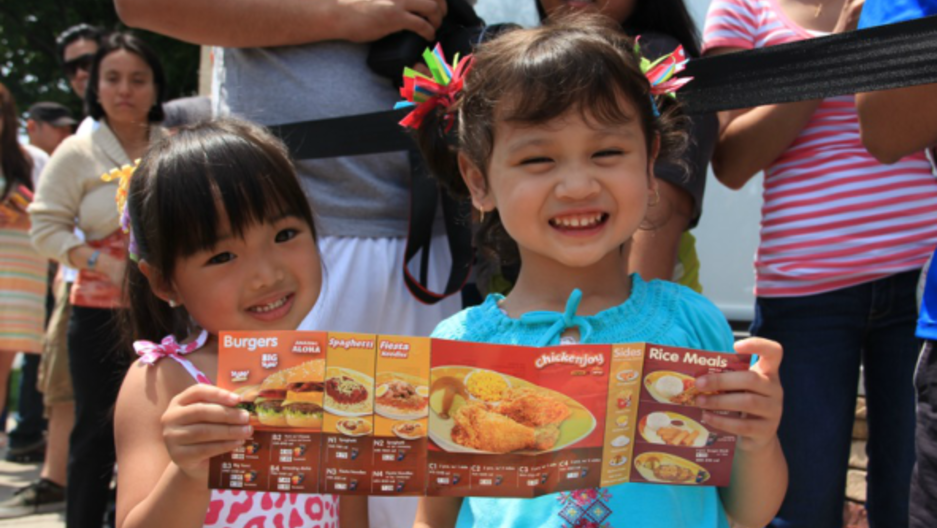 With over 900 locations in the Philippines, the Jollibee restaurant chain is wildly successful.

Jollibee has branches all over the world, and for Filipinos living abroad, it has become a comforting reminder of home.

Jollibee serves burgers, fries, spaghetti and fried chicken. It’s American fast food, with a Filipino twist. And now it’s bringing those foods to the United States to the delight of Filipinos living here.

New Jersey is home to an estimated 100,000 Filipinos, and on opening day at the new Jollibee in Jersey City, the restaurant was filled to capacity. Customers picked up buckets of spicy fried chicken, stacks of hamburgers, white rice wrapped in paper and frosty cups of pale, purple yam milkshakes.

From the time it opened, there was a line out the door. By lunch the wait took half an hour. Randy Santos of Harrisburg, Pa., says the three-hour drive to Jollibee was worth it, because it’s still cheaper than the price of a ticket back home. Santos says it’s been a while since he’s gone back to the Philippines.

“I think this is the best way for me, the cheapest way to do it. Just to go to Jollibee and I feel like I’m in the Philippines right now,” he said.

On the Jollibee menu are familiar fast food staples, altered just enough for the Filipino palate. The hamburger’s beef patty is seasoned with garlic, onions and soy sauce, or something like it. The french fries are served with the country’s beloved sweet ketchup, made of bananas dyed red to look like tomatoes. Fried chicken comes with either mashed potatoes or steamed rice.

Jollibee’s iconic spaghetti is barely recognizable from the American version, much less the Italian one: the pasta is boiled well past al dente, and the tomato sauce is sweet, cooked with sliced hot dogs and topped with melted cheddar cheese.

For milkshakes you have a choice of ube, a purple yam, or buko pandan, which is young coconut, mixed with something that gets translated into English as screwpine.

When the giant yellow-and-red striped Jollibee mascot shows up, children gather around to hug him and adults line up to take pictures with him.

Among homesick Filipinos, Jollibee has a cult following. The company knows that part of what it’s selling is nostalgia. From the tables and chairs to the murals on the wall, everything is a replica of what you’d find at a Jollibee in the Philippines.

“Once they’re inside, they’re transported back to Manila, to the Philippines in their favorite Jollibee store,” said Maria Lourdes Villamayor, the business head of East Coast Operations for Jollibee.

To get the food exactly right, Jollibee imports the ingredients.

“We even import our spices for the Chickenjoy, which we supply to our processor here,” Villamayor said. “Even the breading and the gravy are all imported from the Philippines. So it’s exactly the same gravy, the same breading that we use in Manila. The pies. All are made by the same commissary in the Philippines. We bring them here.”

Jollibee’s food is an expression of the long history of American influence in the Philippines. In 1898, the United States bought the Philippines from Spain at the end of the Spanish-American War. For nearly 50 years, the Philippines was America’s only official colony.

America was involved in the government and the military, certainly, but its influence also filtered into Filipino food, says Amy Besa, author of the cookbook, Memories of Philippine Kitchens, and owner of the Filipino restaurant, Purple Yam, in Brooklyn.

Filipinos were told their native diet of fish and rice was nutritionally deficient, Besa said.

“When I was growing up, that was one of the things that Americans did to us. They made us feel that our food was inferior," she said.

This is the food culture that Jollibee was built on — and it’s proved to be an enduring one.

When McDonald’s showed up in the Philippines in 1981, Jollibee only had a few branches selling its style of hamburgers and hot dogs. But within four years, Jollibee was outselling McDonald’s in what The Economist magazine described as a “huge embarrassment.”

Besa, who’s an advocate for fresh ingredients and traditional cooking techniques, doesn’t really like Jollibee’s food, but she appreciates what it accomplished. She says Filipinos are proud of the company and see it as a David and Goliath story, where a home-grown business beat McDonald’s at its own game.

She also believes that no matter how popular American fast food has become, it won’t displace more traditional Filipino cooking.

“We are capable of embracing all this craziness from abroad, from outside and transforming them into some crazy Filipino food," she said. "But then we are also very good at preserving our own.”

Besa says when Ferdinand Magellan landed in the Philippines in 1521, he was served suman and tuba — a snack of sweet rice steamed in banana leaves, and a drink of fermented coconut sap. These are foods that have survived at least 500 years of foreign influence, and can still be found in any given market in the Philippines today.

At the Jollibee in Jersey City, Santos said both of his teenaged sons celebrated their first birthdays at a Jollibee in Manila.

"Being here in Jollibee represents back home. It represents our tradition as a family," he said.

It’s a sentiment shared by Filipinos sitting down for a meal in crowded Jollibees from California to Hong Kong and Saudi Arabia. They’re happy that the company found a recipe for the feeling of going home again, all for the price of a Yumburger.

Aurora Almendral is part of Feet in 2 Worlds, a project of the Center for New York City Affairs at The New School that brings the work of immigrant journalists to public radio.