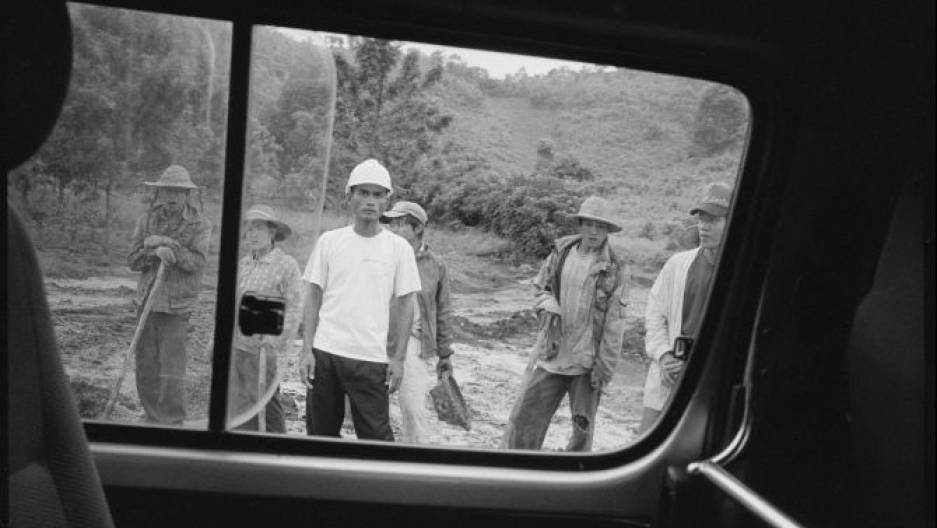 An engineer and Burmese laborers on the oil and gas pipeline that carves its way from Kunming in China to the Indian Ocean on the coast of Burma. Built and designed by the Chinese National Petroleum Corporation, the pipeline will be 2800km long once complete.
Credit: Gary Knight
Share

THE GOLDEN TRIANGLE — This place has always served as a watery junction where human and physical geographies collide. Burma, Laos and Thailand all meet here, as do the great Mekong and its smaller tributary, the Ruak, which tumbles down out of the Shan Hills.

The confluence also served as our base of operations in Southeast Asia, for the excellent reason that nowhere is China’s extensive influence in the region so starkly evident.

GlobalPost was looking to see how China is exerting itself here, how it is trying out a new kind of ‘soft power,’ a phrase coined by Harvard University Professor and retired US Navy Admiral Joseph Nye.

The concept of ‘soft power’ describes the ability for a nation to attract and co-opt rather than coerce, using force or giving money as a means of persuasion. Empires have practiced it since the beginning of history, and here in the Golden Triangle China is using ‘soft power’ to great effect. It is evident in the way China is controlling the river, the energy, the fishing industry and the trade – legal and illegal – that thrives along the banks of the Mekong River.

And perhaps nowhere along the Mekong have the changes wrought by that regional hegemon been so dramatic as in Burma, the shores of which are now lined with illegal sawmills, bordellos, methamphetamine labs and casinos. The photographer Gary Knight and I were on assignment for GlobalPost, trying to find our way into Burma in order to better understand a country beginning a new chapter in democracy and inundated with sudden change.

For much of the last century this region produced most of the world’s opium crop, but in recent years the heroin trade has declined, replaced by equally illicit traffic in everything from humans to timber to meth to rhinoceros horns. But as China began to implement its “Go Out” (or “Go Global”) policy in the late ‘90s, legal trade began to bloom along the Middle Mekong, tripling to roughly 300,000 tons since 2004, according to the Mekong River Commission.

Colorful longtail boats once dominated this trade, running garlic and apples and opium between the villages located along the river. They now share the waters with 100-ton barges originating from China’s Yunnan Province to the north, a powerful symbol of China’s prosperity, reach and influence throughout Southeast Asia.

Much has changed in the Golden Triangle since China opened its borders in the 1980s, and began engaging with its neighbors. It may have begun with trade between the locals in Yunnan and their ethnic counterparts (the Dai of Southwestern China are closely related to the Thai, the Lao and the Shan of Eastern Burma) on the other side of the river, but the relationships have grown more complex with China’s rapid path to prosperity.

Soft loans, arms sales, and the sort of international support that only a UN Security Council member can provide have followed. The results has been that countries like Burma, Laos, and Cambodia are bound more closely to China than ever before.

In recent years the Chinese have been inclined to treat the South China Sea as its own mare nostrum, they have quietly turned the Mekong into their own private river, with five dams built and more in the planning stages. The downstream countries — Myanmar, Thailand, Laos, Cambodia and Vietnam — are dependent on Chinese goodwill to maintain the flows on which some 60 million people depend for fishing, trade, and irrigation.

“Even during the dry season, we could move our goods up and down the river,” says Bounmy, a 42-year-old Laotian man from Banmom, a small village across the river from Chiang Saen.

Standing on one of the many piers used by the longtail boats, he points to a stone in a wall high above our heads.

“The river used to come up to here in the wet season,” he says. “Now look at it.”

Indeed, in February 2010 scores of boats were left stranded in this northern Thai port city, leaving some $4.6 million in cargo high-and-dry, according to Chiang Saen customs officials. The downstream countries and environmental groups blame the dams for the water shortages, while the Chinese government blamed increasing droughts.

While the summer of 2012 saw record rains (and record trade levels), the long-term forecast calls for more droughts. China exercises what analysts call a “hydro-hegemony” over Southeast Asia.

“Southeast Asia is caught in a pincer movement,” says Richard Cronin, the director of the Southeast Asia program at the Stimson Center, a Washington, DC-based think tank. “They have China making aggressive claims to territory in the South China Sea, and this tight grip on the Mekong to the north.”

The Chinese government has claimed that the dams will benefit all their Mekong neighbors by allowing them to release reserves during the dry season and droughts. Activists, and traders like Bounmy, are skeptical.

More from GlobalPost: VIDEO: A changing climate for reporting in Burma

Signs of China’s pervading influence in the area are everywhere in the Golden Triangle, from the tourist ferries docked nearby to the massive Chinese-owned and operated casino complex, called Kings Roman, that sits a few hundred yards from where Bounmy stands.

When the casino was first being built, Bounmy says, Laotian officials came and told him to sell his land to the Chinese, 40 acres of rice paddy that had been in his land for generations. They made it clear, Bounmy says, that he didn’t have a choice. Then the buyers — investors, Bounmy says, in league with the casino — turned around and sold his land to other Chinese investors for nearly twice what Bounmy had been paid.

Stories like this are common throughout Southeast Asia, says Cronin. And there’s little recourse for justice, he says, because countries like Burma, Cambodia, and Laos receive millions in cheap loans and investment.

“China will say that it’s helping develop these countries, and raise GDP [gross domestic product]. And that’s true. GDP is growing. But it’s going to developers and people in the cities. The villagers, on the other hand, are losing their birthright,” says Cronin, referring to their land, and as the health of Mekong fisheries decline, their livelihoods as well.

The Mekong flows past Burma on its way to the Golden Triangle, through the very regions occupied by the Chinese “Kuomintang,” nationalist forces that fled into Burma after Mao finally conquered Yunnan Province in 1949. The KMT fought on, using Burma as their base, until 1961. Unsurprisingly, China’s influence is felt strongly in the area, which is still heavily populated by its countrymen.

But as we soon realized, despite its central location, a traveler cannot get from the Golden Triangle to Burma proper. Burma is separated from China by the Shan State, a proud, culturally rich but war ravaged region of beautiful hills that grow some of the best tea — and opium — in the world. Instead, one can cross into the Shan market town of Tachilek, which until recent raids was famed for drawing Chinese that trafficked in illegal animal parts to serve that country’s insatiable appetite for exotic aphrodisiacs and elixirs. The Chinese influence, however, remains.

Instead of pressing further, we turn around. We will first have to go back to Bangkok, then board a plane for Rangon, before finally landing in the heart of Burma — Mandalay.

And, as it turned out, the heart of our story: A new, Chinese-constructed hydroelectric dam and the Sino-Burmese Pipeline, two massive public works projects that embody China’s soft power in a region where it is aggressively extracting vast amounts of natural resources to satiate its voracious, rapidly growing economy.