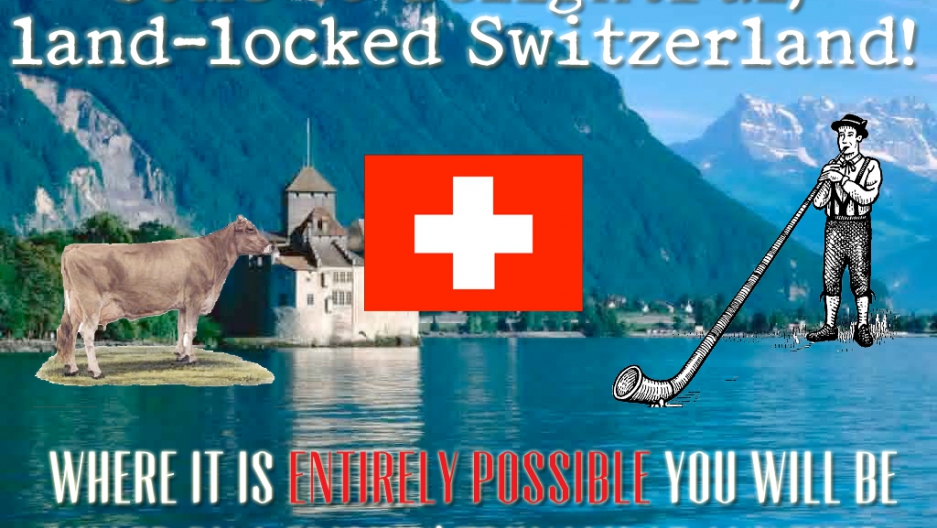 It's been a banner week for natural disasters, and in unexpected places: an earthquakes hits Canada, triggering a tsunami in Hawaii. A massive hurricane bears down on New York City and the United State's eastern seaboard. And now we've got lake tsunamis.

Yes, lake tsunamis. Are you one of those tsunami-phobic types? Maybe the sort of person who stays up late at night staring at the ceiling in your lake-front home, thinking to yourself: "God, I'm glad I found some waterfront property that was on a nice, docile alpine lake. Because I am effin' TERRIFIED of tsunamis."

Then you won't want to read about these new findings reported on by the Telegraph, which indicate that lovely, Heidi-esque Geneva Switzerland is apparently at a real risk of being flattened by a lake tsunami. It's like something out of a horror movie no studio executive would ever option, isn't it?

Experts certainly believe that you should be more worried about lake tsunamis, especially if you are unfortunate enough to reside in Geneva, near the eponymous lake—or near any alpine lake that has the unfortunate quality of being near lots of rocks.

SwissInfo reports that researchers feel Switzerland is likely due for some kind of lake-tsunami event they will almost immediately make a bad movie out of. And no one can quite figure out a good way to stop this from happening, either.

The Swissinfo article linked above provides a really remarkably sobering account of deadly Swiss tsunamis in history, which mostly makes me never want to go near an alpine lake ever again for any reason. Since what a way to go.

Nature writes that a 6th-century tsunami (AD 563) appears to have flattened an earlier incarnation of a Geneva just released form Roman rule—indicating that today's 200,000 Geneva esidents might want to take a long, hard look at their flood insurance.

You are doubtless asking: "Prey tell, how does a lovely, glassy alpine lake suddenly turn into a tsunami cauldron of horror? The hell is up with that business?"

It is in fact a simple matter of gravity.

Lake tsunamis can occur when a large quantity of rock falls into a (usually) alpine lake. The rock, in the case of the earlier Geneva event, appears to have caused a massive mudslide according to Nature, triggering 13-meter-high waves. Waves sloshing right into your lovingly decorated grill area.

The waves appear to have hit eight minutes after the initial rock fall, so that really isn't a very adequate amount of time to grab your Golden Retriever and your garden gnome collection and escape, either.

Sucks, doesn't it? Something else to lie awake at night being worried about. Nature is cruel.