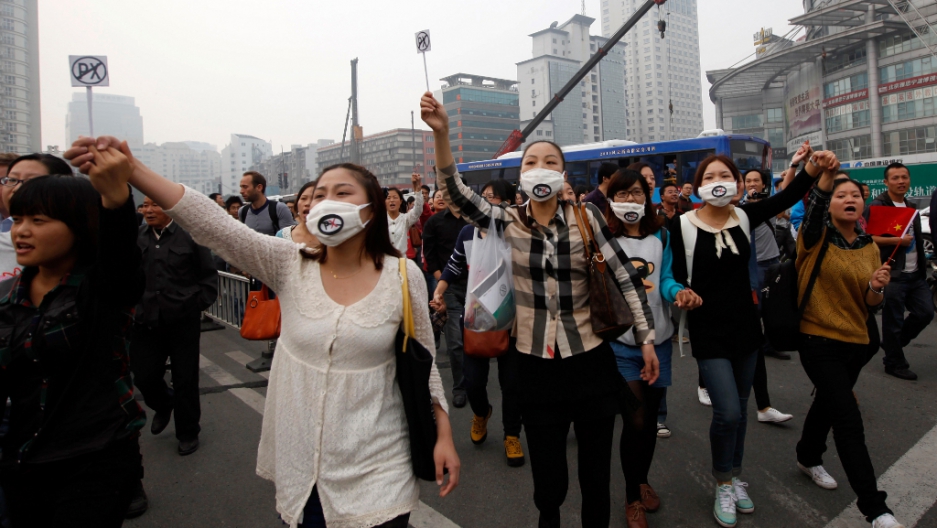 Chinese protesters march to protest against the construction of a 55.9 billion yuan (8.9 billion USD) chemical plant in Ningbo, east China's Zhejiang province on October 28, 2012. Authorities in east China ordered a security crackdown on October 28 after thousands of locals clashed with police during a protest over the construction of a chemical plant.
Credit: AFP/Stringer
Share

HONG KONG — In China, where pollution is rampant, smog is the norm, and cancer is the number one killer, ordinary people are increasingly saying enough is enough.

For the fourth day, hundreds of protesters in the prosperous coastal city of Ningbo took to the streets to oppose the $8.9 billion expansion of a massive petrochemical plant in the city.

On Sunday, local officials said they had tabled the expansion, but protests continued as demonstrators said they did not believe the government would keep its promise. Ningbo, an ancient city of 3.5 million, has seen its cancer death rate surge after the creation of a chemical industry development zone in the city.

The protest attracted huge interest despite officials’ efforts to keep a lid on the crisis.

On Weibo, China's equivalent of Twitter, images of the protests were retweeted widely, in defiance of new filters that reportedly blocked photo uploads from the Ningbo area.

One popular post collects images of Ningbo citizens and protesters under the headline, “It's all because we love you, Ningbo!"

Observers say it’s the latest outburst of growing discontent with pollution among China’s middle class, whose lives have improved economically, but deteriorated environmentally.

“It is another example of the ‘rise of the mortgage class’: the increasing assertiveness of an urban, educated, middle-class citizenry that is ready to take the streets on issues that may have a direct impact on their living environment,” says Nicholas Bequelin, Asia researcher for Human Rights Watch.

Indeed, recent years have seen an increasing number of such incidents. In mid-2011, protests broke out in the northeastern city of Dalian over a planned plant that would produce paraxylene (PX) — the same toxic byproduct that has spurred protest in Ningbo.

Throughout 2012, thousands of demonstrators endured tear gas and beatings while repeatedly picketing a new coal plant in the island province of Hainan. And in July, in southwestern Sichuan province, plans for an enormous, $1.8 billion copper smelting plant at Shifang were scrapped after rioters clashed violently with police.

Why all the protests? In part, it’s due to the increasing investment of more prosperous Chinese citizens in their property and their health. And partly it’s because local party bosses have every incentive to keep approving big-ticket, high-pollution industrial projects that harm citizens more than it helps them.

As a result, the number of environmental protests has surged nearly 30 percent a year for the past 15 years, according to the Associated Press.

“Excluded from decision-making that could have a direct effect on them, their families, and their property, these citizens are increasingly vocal and contentious,” says Bequelin.

Even the Global Times recognizes this fact. After the copper-plant fiasco, the state-run tabloid urged local governments to take the incident “as a grave warning.”

“Only erroneous site selections, unqualified environmental protection indexes, and insufficient communication between officials and the public can set these projects in confrontation with public interests,” the editors wrote.

“This is exactly why we say what happened in Shifang should never be repeated.”

Instead of taking this advice, officials simply tried to suppress the unrest in Ningbo and contain awareness of it. After police fired tear gas in the crowds, the term "tear gas" was censored on Weibo. Both "PX" — the name of the toxic chemical — and Zhenhai — the name of the company building the plant — were also blocked.

Users posted photos showing that signs on the highway pointing the way to Ningbo were mysteriously covered with a green tarp — presumably to stop outsiders and reporters from reaching the city.

Nevertheless, word broke out as people cheered for the citizens of Ningbo online.

“This year’s most emotionally moving people are the Ningbo citizens!” declared one user.

Some seemed inspired by the images of young people and teachers joining the weekend protests. “Students, remember the Ningbo of today!” wrote one. “Today we all are students and teachers,” replied another.

“Who says that Chinese people aren’t of good character?”

Local demonstrators reportedly welcomed the presence of foreign reporters, with the crowd at one point hoisting up a British cameraman so he could get a better view of the protest.

However short-lived it may be, the success of the protesters in defeating the planned chemical plant is almost certainly tied to official fear of instability so close to the 18th Party Congress in early November.

“The pattern of these protests has been that the government backs down in the short term, but there is no saying what the future holds,” he says.

“It’s ad-hoc tactical retreats from the government, not an enfranchisement of the citizenry in decision-making on matters of public interest. It effectively rewards escalating protests. As the Chinese saying goes: no trouble no result, small trouble small result, big trouble big result.”