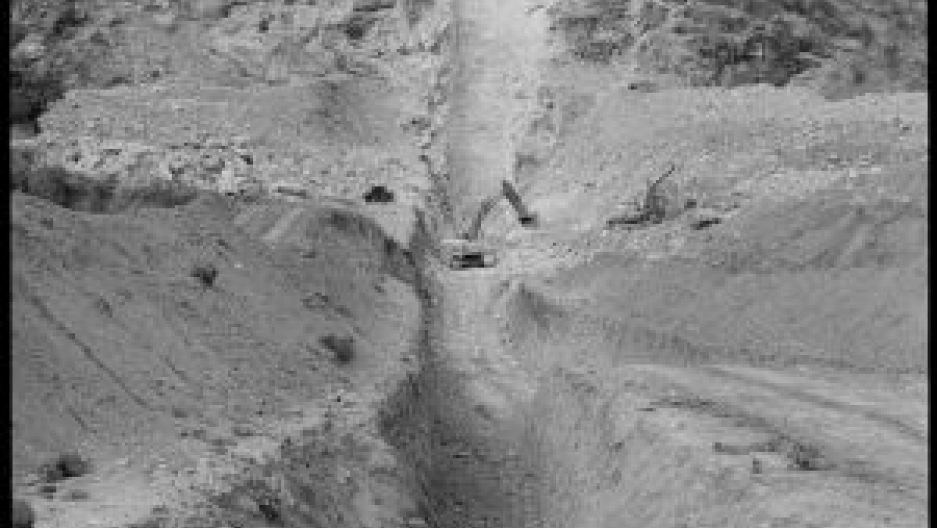 The Sino-Burmese Pipeline that carves its way from Kunming in China to the Indian Ocean on the coast of Burma.(Gary Knight/VII/GlobalPost)
Credit: Gary Knight
Share

HSIPAW, Myanmar — The Sino-Burmese Pipeline is a massive, $2.5 billion project intended to ensure China’s energy security well into the 21st century. It follows the Burma Road up from the Irrawaddy River plain through the Shan Hills and finally, into China.

When completed, the pipeline’s double-barreled conduits will annually deliver 22 million tons of oil and 12 billion cubic meters of gas to destinations within China’s Yunnan Province.

Much of this will be used to alleviate the severe oil shortages that strike the fast-growing Yunnan with increasing regularity. The rest of it will be processed and refined inside the region, then shipped on to other, equally oil-thirsty regions within China.

We came upon the pipeline just outside Mandalay, no more than 20 minutes after leaving the airport. We were somewhat wary as our driver slowly snaked up into the foothills of the Shan Mountains, unsure of what to expect.

The activist group EarthRights International has documented human rights abuses connected to the construction of the pipeline. Whole villages had reportedly been razed and their occupants forced to toil on the very project depriving them of their homes.

“There are at least 28 Burmese Army battalions stations in the area of the Burma-China pipelines,” the organization noted in a 2010 report.

We hadn’t travelled more than ten kilometers when we came over a shallow rise to see three backhoes cutting a giant gash that ran across the road, down a slight decline, then straight up what seemed to be a vertical rock face. The driver slowed to navigate through the construction, and we told him to pull to the side of the road and stop.

Outside, a handful of Burmese workers eyed us warily. One approached our translator, Zaw Win, and spoke to him in low tones before expelling a long stream of violent red betel juice at his feet.

The workers gathered off to the side of the road. The betel-chewer made a call on his cell phone. Zaw Win turned to us and pointed to our cameras, asking, “Are you going to take pictures?”

Human rights groups and ethnic minorities weren’t the only parties to raise objections to the pipelines, which has been spearheaded by the China National Petroleum Corporation (CNPC), one of world’s largest and most powerful state-owned enterprises, with over $200 billion in annual revenues.

Critics within China itself — some employed by CNPC’s competitor, SinoPec — pointed out that laying 1,700 miles of pipeline across some of the most challenging topography in Asia would require considerable engineering acrobatics.

Now we were bearing witness to this fact. One backhoe was perched partway up the 500-foot rock face.

Just then a minivan came roaring over the rise before slamming on its breaks and skidding slightly in the loose gravel around the construction site. Two men clambered out and came striding toward us. I considered stashing the memory card for my camera in my sock, but realized there wasn’t time.

“You’re professors,” Zaw Win murmured, encouraging my colleague Gary Knight and I to stress the fact that we both teach at universities. It didn’t seem a good time to share that we were also journalists. We turned toward them and did our best to smile and look professorial.

The two figures stopped a few feet from us, then smiled back. “Ni hao” crowed one, a man in his early 30s wearing sunglasses and a hipster t-shirt. He reached out and shook our hands. His companion nodded, then spoke to Zaw Win.

“This,” said Zaw Win, motioning to the hipster, “is Mr. Zhao. He’s the engineering supervisor for this section of the pipeline. The other man is his translator, Myint Aung.”

Mr. Zhao swept his arm out toward the mountain, the gash, and the backhoes. He spoke at some length.

“He wants to know if the Americans could run a pipeline straight up a mountain,” Zaw Win said.

We laughed and told him we weren’t engineers. Mr. Zhao, it turned out, wasn’t terribly concerned about who we were, or why we were interested in the pipeline. An employee of CNPC, he had flown in from Beijing months ago to oversee construction along this length of pipeline, which reached from Mandalay to the misty hill town of Pyin-o-Lin. In the past, one of the primary complaints about Chinese-funded projects in Burma is that the Chinese import their own labor force from Yunnan. Not so here, Mr. Zhao told us.

“There are 3,000 Burmese working on this stretch of pipeline alone,” he said.

When we returned to the car, we all let out a sigh and laughed nervously.

“I thought we were all going to jail,” confessed Zaw Win.

We asked why we weren’t.

And so, evidently, it had, as we discovered over the course of three days of reporting at over half a dozen construction sites along the Burma Road.

If you could sum up the change that seems to have swept over Burma in a single, fell swoop, it would be the suspension of the Myitsone Dam on September 30 of last year. Burmese President Thein Sein halted all work on the giant hydropower project, then later this year ordered the Chinese to remove construction equipment from the dam site and return to China.

“When the Myitsone Dam was cancelled, that was a big shock to China,” says David Steinberg, a Burma specialist at Georgetown University. “And it forced them to look at the viability of all their projects in Burma.”

The dam may have been important, Steinberg says, but it pales next to the pipeline.

Economic growth can be seen as a virtuous cycle: increased spending begets jobs which begets more spending which begets new industries, and increased tax revenues, and a higher quality of living for all. And so has it proved in China, which has averaged double-digit growth for the past 30 years. But China’s growth has created a vicious cycle, or what Travis Mitchell, a researcher at Sweden’s Lund University, calls a “cycle of dependency.” Raw materials are required to create infrastructure which creates consumer demand. As the Chinese economy has heated up, the need for more raw commodities—the oil, gas, minerals, and timber that Burma has in such abundance—creates even higher demand for raw commodities. Eating, in other words, only makes China hungrier.

Currently more than 80 percent of China’s oil — 10 million barrels per day — passes through the Straits of Malacca, a strip of water between Indonesia and Malaysia that forms a choke point in Asia’s energy supply. The narrow shipping lane was plagued by pirates in the early years of the 21st century, but the greater strategic threat to China is its vulnerability to control by some foreign antagonist. The Sino-Burmese pipeline could provide desperately needed diversity to China’s energy sources, supplying up to 20 percent of its annual demand for oil and gas.

The Burma Road is one of the primary thoroughfares in the country, so its state of disrepair is a testament to the poor state of infrastructural development in the country. As one travels from where the pipeline crosses the road outside Mandalay, the road gets steadily more pockmarked. Dump trucks bearing the brand of Asia World in Roman script come careening toward us, swerving at the last minute to pass. Women ride scooters on the berm, children perched sidesaddle on the seats.

The importance China places on the pipeline was evident as we followed the road up into the Shan Hills. Here, well beyond the population centers of the Irrawaddy Valley, the pipeline regularly criss-crossed the road. As each juncture we would slow to a crawl, our driver picking our way through the mud. Chinese engineers could often be seen in hardhats and rain slickers, standing on a rise over the site. Burman and Shan workers would fill buckets with the wet, red clay, using hands or the slender hoes used to harvest rice.

At one stop outside Hsipaw, where English-educated Sawbwas once ruled over tiny princedoms, we stopped to interview one of these work crews. One slender young man named Maung pulls a crumpled pack of cigarettes out of the waistband of his shorts, and lights a cigarette. Before the pipeline came they farmed this acreage, he says. Did they receive compensation for the land through which the pipeline passed? Yes. About $2,500 per acre. Did he find this to be fair?

He smiled, then spoke. He and Zaw Win laughed and Zaw Win informed us, “He says yes, especially since he didn’t have a choice.”

They had already covered up the pipeline and will begin planting rice again in the next growing season. In the meantime, he and the other villagers made $4 a day filling the ditch over the pipeline. Is that enough? “He said, no, but it’s more than they could make farming, and they’re thankful for the work.”

He also noted that the Chinese engineers had been careful to route the pipeline around the villages.

This, then, was Chinese soft power in the wake of Myitsone Dam debacle: a careful obedience to a new state of affairs. No forced labor. The evictions, from all accounts, took place not at the end of a gun barrel, but by writ of law. The villagers weren’t necessarily happy about it, but none believed they had received less than market value for the use of their land. The biggest complaint was the long queue in Hsipaw in which villagers stood to receive their compensation.

For the most part, the Shan and Burmese along the pipeline see little change in their fortunes. They will receive neither gas nor oil from the pipeline, and soon the Chinese engineers and big Asia World trucks from where they came. Four dollars a day isn’t much. But it’s work.