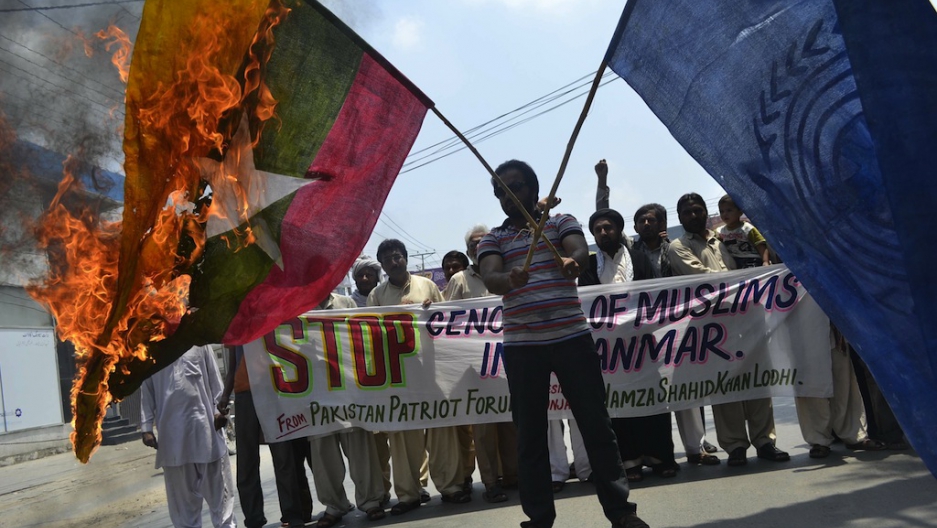 An activist holds a burning Myanmar and UN flag during a protest in Multan on July 22, 2012, against the killing of Muslims in Myanmar. Myanmar security forces have committed serious rights abuses against Muslims in violence-hit western Rakhine state during six weeks of emergency rule, Amnesty International said. Communal violence between ethnic Buddhist Rakhine and local Muslims, including the Rohingya, has left at least 80 people dead and forced tens of thousands out of their homes.
Credit: S. S. Mirza
Share

The United Nations has reported that 22,000 Myanmar Muslims have been displaced in the latest wave of bloody sectarian violence in Rakhine state, as tensions between Buddhists and Muslims continue to flare.

This places the current number of displaced Myanmar Muslims at 100,000, increasingly pushed into over-crowded and squalid refugee camps.

The arson attacks appear to have taken place on October 24th. Myanmar's government has acknowledged that 80 people have died thus far in the sectarian violence, says the BBC, and over 4,600 houses have been burnt.

The Rohingya-advocacy group Arakan Rohingya National Organization (or ARNO) has rather different figures: on Saturday, they claimed 360 dead and over 3,500 buildings burned in the renewed violence.

HRW said on Saturday that Myanmar's government should "take immediate steps to stop sectarian violence against the Rohingya Muslim population in Arakan State, in western Burma, and ensure protection and aid to both Rohingyas and Arakanese in the state."

The fighting is a continuation of violence ignited last summer, when 80 people died after a group of Muslims were accused of raping a Buddhist girl. About 800,000 Muslims reside in Rakhine state.