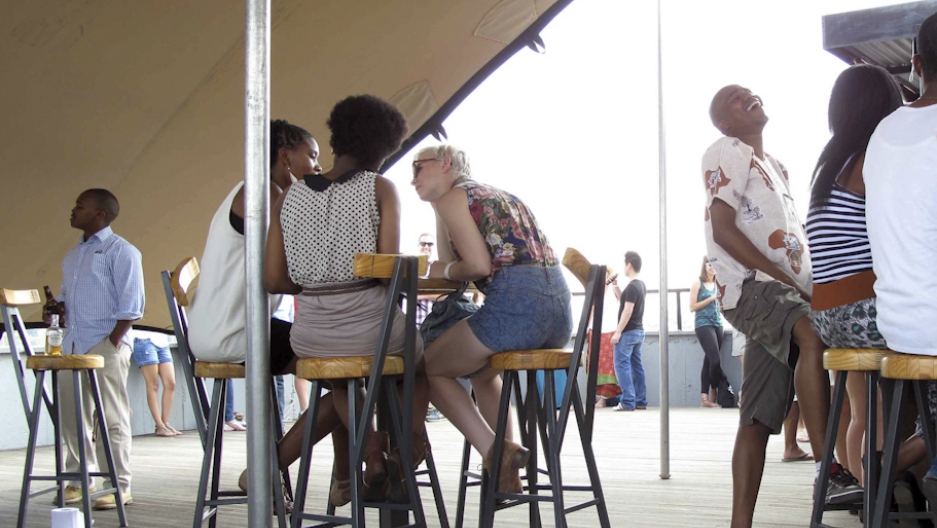 Sunday afternoon drinks at the rooftop bar of Main Street Life, an industrial building in Johannesburg's downtown that was redeveloped into apartments and a boutique hotel.
Credit: Caroline Killmer
Share

JOHANNESBURG, South Africa — The city of Johannesburg, once branded more dangerous than a warzone and a cautionary tale of urban decay, is becoming one of the world’s most exciting new frontiers for arts and tourism.

Other parts of the inner city are seeing new upscale grocery stores, coffee shops and restaurants with street-side tables luring the white-collar employees of banks and mining companies to stay beyond office hours. Areas such as “Little Addis,” a thriving Ethiopian business district, embody Johannesburg’s growing reputation as an African capital.

Gerald Garner, author of books about Johannesburg’s regeneration, said that for the first time in South African history, people of all backgrounds are living and working in a “truly all-inclusive” geographic area. And, he added, the city is safer for it.

“[Johannesburg’s downtown] is the first place 20 years after the advent of democracy where we are beginning to see a new society,” Garner said. “We’ve reached a critical mass.”

Despite the influx of entrepreneurs, developers, artists and trendsetters, Johannesburg’s old reputation, as murder capital of the world, has proved stubbornly hard to change.

South Africa, in particular greater Johannesburg, still has a disturbingly high crime rate, though it is slowly declining. And despite the urban improvements, some areas of the city remain dangerous — for example, the downtown neighborhood of Hillbrow, where every New Year’s Eve residents celebrate by stockpiling old appliances, carrying them up to apartment building rooftops, and tossing them into the streets far below.

A conflux of factors led to Johannesburg’s rapid decline in the 1990s, including mass abandonment of offices and apartment buildings in the city center, and a sudden deluge of black workers who under apartheid were forced to live outside the city. Johannesburg became known for “hijacked” buildings, filthy streets and brutal crime.

More than a decade of regeneration efforts, starting with the simple steps of tidying urban spaces and installing public art, have helped turn the tide in Johannesburg. But news of this change has been slow to spread.   It isn’t uncommon to hear residents of Johannesburg’s northern suburbs, where every home is boxed in by a high wall and electric fence, boasting that they haven’t been downtown in 20 years.

Garner, who leads walking tours of downtown Johannesburg, said 55 percent of people on his tours are locals looking to explore their own city. Sometimes this involves a great deal of trepidation: he recalled one woman who was so terrified of being in the city that she was in tears.  Garner praised the 2010 World Cup for its role in re-introducing people to Johannesburg, called “Joburg” or “Jozi” by locals.

“It changed people’s perceptions of the city, not just foreigners but also the locals,” Garner said. “We rediscovered our city.”

When tourists visit South Africa, they land at Johannesburg’s OR Tambo international airport — and almost always leave right away for Cape Town or perhaps a safari at Kruger national park.

Greg Sullivan, founder and CEO of AFAR, a travel magazine and website, earlier this month led a group of well-heeled tourists with the specific aim of exploring all sides of Johannesburg.   It was the second-ever “AFAR Experiences,” a travel program that introduces tourists to prominent local artists, politicians, cultural figures and businesspeople.   Sullivan said he has been visiting Johannesburg since 2005, and has seen the changes.

But while tourism to South Africa is growing in popularity, Johannesburg remains an afterthought.

“South Africa is a growing destination,” he said, “but no one comes to Joburg. Sure it’s got its walls, but it’s a lot more open than it used to be. You can tell this city is on the verge.”

In Johannesburg and its suburbs, homes are fortified with burglar bars, high-tech alarm systems and electric fencing. In most places, you wouldn’t want to stroll the empty, poorly lit streets at night. Private security remains a major industry, and guards are visible at every downtown development.

An average of 42 people a day are murdered in South Africa, a country of 50 million, according to the latest police statistics. The murder rate has declined since more than 18,000 murders were recorded eight years ago. According to police records, 15,609 have been killed for the year ending in March. The country also has one of the highest recorded rape rates in the world.

But Garner said downtown Johannesburg’s reputation as being murder central is misguided. In fact, he is convinced that it is safer to walk though Johannesburg’s downtown than in one of the city’s posh northern suburbs.   According to Garner, 50,000 new apartments have been added in the city in the last five years, most of them affordable rental apartments, not luxury properties. This means there are 100,000 new economically active people living in Johannesburg’s downtown, he said.

“Your biggest risk today is that you’re going to trip over something,” he said at the start of a recent walking tour with an AFAR group through the city center.

“Eight years ago I would never have brought you here,” he said, next to what was once a squatter camp located in an industrial building before being renovated into the headquarters of AngloGold Ashanti, with a stylish event venue called the Turbine Hall.   “You stand on what was the most dangerous spot in Johannesburg. What used to be a squatter camp is now Johannesburg’s most popular wedding venue.”