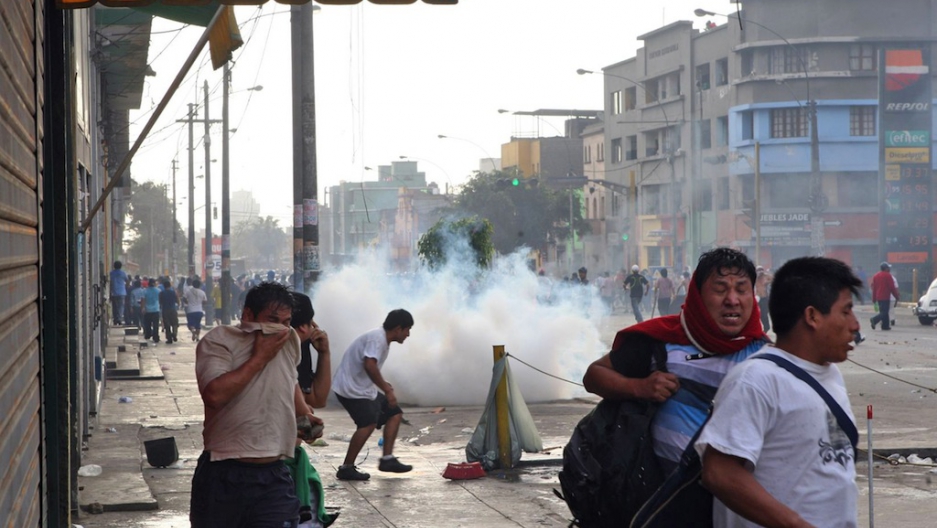 Riot police fire tear gas at protesters during riots at a La Parada market in Lima, on October 25, 2012. Two people were killed and 100 more wounded when clashes erupted Thursday as thousands of police moved in to relocate a crowded wholesale food market in Lima, officials said. The fighting began when the Lima municipality placed concrete blocks at the entrance to the La Parada market to prevent trucks from entering, leading traders to hurl stones in protest and police to respond with tear gas.
Credit: GAMARRA
Share

Thousands of riot police were deployed to an open-air market in Lima, Peru, on Friday, a day after two people were killed when an angry mob went on a looting rampage.

According to Al Jazeera, the looting began when vendors became angry over plans to move the market. The clashes initially broke out after police blockaded wholesale produce market La Parada, where the sellers generally dispose of their produce.

The vendors threw stones and bottles at police, who then fired tear gas rounds and charged the crowd, Al Jazeera also reported. A 32-year-old man died of a bullet wound to the stomach and a 20-year-old died after a blow to the head.

Some 5000 police officers were deployed to La Parada after the 500 officers who tried to block the street entrances with concrete barriers in order to move the vendors to a different location were attacked, reported Agence France-Presse. Of the 100 injured, 68 were police officers, five of whom were hospitalized. One officer was knocked off his horse and attacked with clubs and rocks.

"They took advantage of a wounded police officer, half fainted, and tried to kill him off," said President Ollanta Humala, according to AFP. "This is shameful behavior," he said, calling the attackers "savages."

The Peruvian capital has long wanted to move the run-down market to a new location with modern facilities, noted France 24. But the merchants have opposed the move, saying they fear they will pay higher rent and lose access to customers.