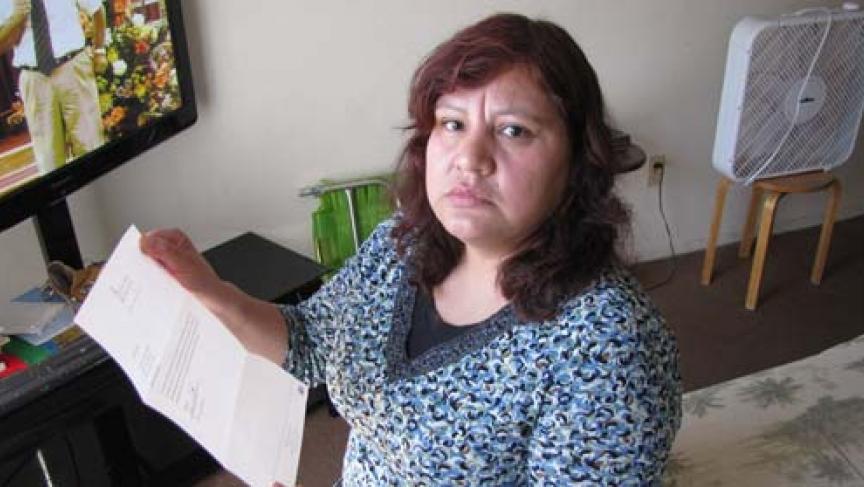 Aurora Tristan was carjacked in Maricopa County, Ariz., and agreed to help prosecutors go after her attackers. She should have been entitled to receive a U-visa from the U.S. as a crime victim, but she needed help from law enforcement. (Photo by Valeria F

The switchblade pressing into her neck took Aurora Tristan by surprise.

She jumped out of her 1998 Honda Civic and ran. The carjackers — two young women who had asked her for a ride outside the grocery store — drove off with her car.

The 45-year-old said she was unaware at the time she dialed 911 from her cell phone that her status as a victim of an armed robbery might qualify her for a U-visa if she cooperated with law enforcement and prosecutors.

“I wanted to help because I felt they need to pay for what they did to me,” said Tristan, who is Mexican. “I don’t hate them or resent them, I just wanted justice.”

Across the country, undocumented crime victims like Tristan work with local law enforcement and prosecutors’ offices. But when it comes to certifying their help in an investigation, something that helps lead to legal status through a U-visa, where the crime occurred is often as critical as the case itself.

In Maricopa County, victims find themselves at the mercy of lingering anti-immigrant sentiment.

Too Afraid to Seek Help

The U-visa was created by Congress in 2000 to help law enforcement with the prosecution of violent crimes committed against undocumented immigrants, especially women, and to encourage these crime victims to come forward without fear of detention or deportation.

But in an atmosphere clouded by the “Show me your papers” provision of Arizona’s 2010 immigration law, SB 1070 — which went into effect in September — policies meant to protect are all but ignored.

And with the Maricopa County Attorney’s Office, the largest prosecutor’s office in the state, refusing to certify immigrants who assist with prosecution, immigration lawyers agree law enforcement is now the only avenue left to get the certification to obtain a U-visa.

To get one, crime victims first need a certificate, called an I-918 B form, proving they are indeed victims of a violent crime, and have cooperated or will cooperate with police or prosecutors. The form must be signed by a police officer, a prosecutor or a judge, or victims can’t begin proceedings with Citizenship and Immigration Services, the branch of the Department of Homeland Security that ultimately decides if they qualify for the visa.

In Tristan’s case, she helped the Phoenix Police Department identify the carjackers. But she didn’t get a U-visa because neither the department nor the prosecutor’s office agreed to sign the I-918 B form.

Police waited until after the case was closed to deny the request.

“They (said they) did not sign the certification form because ‘the defendants were already sitting in jail,’" explained Randall Rowberry, Tristan’s immigration attorney, who said he had made the initial request before the pair were sentenced.

Rowberry then tried his luck with the Maricopa County Attorney’s Office. Four months later, he got a rejection letter from the chief of the Special Crimes Bureau with no explanation.

While agencies are allowed some discretion when deciding on U-visa certifications, the Maricopa County Attorney’s Office, led by Republican Bill Montgomery, has approved only a tiny fraction of cases. For victims like Tristan, who turn to the prosecutors’ office as a last resort, this has proven a major roadblock.

“I don’t want my office to be in a position to help someone gain legal status for the purpose of prosecuting a criminal case,” Montgomery explained in an interview.

Since 2009, his agency has received 83 requests, turned down 19, referred seven to other agencies and granted only six. As of the middle of October, they had a backlog of 51 cases, according to public records.

Among the few cases the office did certify was that of a Latina immigrant who was the victim of a high-profile serial rapist known as the “Baseline Killer.” Montgomery explained the decision as being “absolutely necessary to take care of a situation.”

“I don’t want immigration attorneys to default to a request for a visa on behalf of someone because they were the victim of a crime,” he said.

In Tristan’s case, her carjackers pleaded guilty after she offered to help prosecutors.

“There was no trial. Why would we need to issue a U-visa (certification)?” spokesman Jerry Cobb said. “The only way we become involved is if we need that person to investigate a crime.”

Rowberry dismisses the argument as one sided.

“This is not a witness visa; it’s a victim’s visa,” he said.

In fact, the law doesn’t require that a victim take the stand or even that police prosecute the case in order to issue a U-visa certification. It simply states the individual “must have been helpful, is being helpful, or is likely to be helpful in the investigation or prosecution of the crime,” according to immigration services officials.

Under the law, Montgomery can use discretion when deciding whether to issue a certification, such as when he needs a person to remain in the United States as a witness. But the Maricopa County attorney's record does raise questions as to whether the law offers too much discretion, even in cases where, by all accounts, applicants meet the qualifications.

“There is a gray area in the law,” said Christina Ortecho, an immigration attorney at Friendly House, a non-profit organization catering to the area’s Hispanic population. “Congress did not detail what [agencies] could or could not consider” when deciding on a request.

In his role as prosecutor, Montgomery works closely with the Maricopa County Sheriff’s Office, run by Joe Arpaio, who is known nationally for his harsh crackdown on illegal immigration and sweeping enforcement of Arizona state laws.

But, Montgomery insists he isn’t influenced by Arpaio’s politics.

“The decisions that I’m making with respect to U-visas, I don’t make those in consultation with the sheriff’s office. That is entirely an independent determination as a prosecutor,” he said.

He added that he has consciously stayed away from pursuing immigration enforcement as a political issue.

Just over a year after he took office, Montgomery made it clear in a 2011 meeting with Latino attorneys that he would not certify U-visas, according to Delia Salvatierra, a local immigration attorney who was at the meeting.

Still, while Montgomery hasn’t taken an anti-immigrant stance publicly like his predecessor — County Attorney Andrew Thomas, now disbarred by the Arizona State Bar for ethics violations — Montgomery has followed quietly in the footsteps of his former boss.

Thomas and Arpaio worked closely on implementing some of the toughest anti-immigrant laws in the country, including a state law sanctioning employers for hiring workers who are living in the country illegally. He also pursued identity theft charges against immigrant workers with forged papers who were arrested in Arpaio’s raids, convictions that could hurt their chances of regularizing their status in the United States.

While Montgomery has distanced himself from both Thomas and Arpaio, his prosecutorial record resembles that of his predecessor. Since 2011, his agency has prosecuted more than 300 cases of employees working with false documents and pursued one civil case against an employer. The numbers roughly track those that Thomas prosecuted from 2008 until the middle of 2010.

Like Thomas, Montgomery has also used a state human smuggling law to prosecute undocumented immigrants with conspiring to enter the country illegally.

Montgomery explains his position as being driven by “complex humanitarian reasons,” saying that prosecuting those who seek the services of a smuggler could act as a deterrent to people who risk their lives trying to cross the border.

But his stance on U-visas leads some to question whether he is in fact pursuing an anti-immigrant agenda.

“He doesn’t care that by taking this hardline stance he is alienating a community from coming forward,” Salvatierra said.

She says she has stopped submitting certification requests for her clients to Montgomery's office. Instead she is turning to police departments, which she admits is not ideal given that prosecutors often have more information about a case than police.

A typical U-visa application can take between nine and 12 months to process — not including the extra time needed to obtain certification from law enforcement.

“There should be an alternative. Whether or not you get your visa shouldn’t depend on the location where the crime happened,” said Valerie Hink, an attorney with Southern Arizona Legal Aid and a long-time advocate for the U-visa.

“When you feel the system has failed you, you’re less likely to engage in the system in the future,” she said. “You’re victimizing the victim again, because you’re saying this crime is not serious enough.”

U-visa Requests with Police on the Rise

And the number of requests is growing.

A review of police departments in Maricopa County shows an increase in applications as well as certifications granted between 2011 and 2012.

One reason for this could be attorneys like Salvatierra, who are now pursuing certification through the police department, knowing the door is closed at the County Attorney’s office.

But Tommy Thompson, a spokesman for the Phoenix Police Department, said there was some concern the increase has to do with fraud.

Since the beginning of this year the Phoenix Police Department has received 125 requests, compared to only 25 in 2011. Most of these were granted.

Thompson says the current immigration climate is making immigrants even more fearful and willing to try to adjust their immigration status, which could open the door for unscrupulous people to take advantage of the U-visa certification by claiming they were victims of crimes that never happened.

“I’m concerned that perhaps now they think this is an easy route to get a visa to stay here legally,” Thompson said.

But for Tristan, the memory of the carjacking still haunts her. She sold her car because she couldn’t stand the memories it brought back. She now takes the bus once a week to see a psychologist with Catholic Services. She doesn’t like to walk alone.

This article was made possible by a grant from Atlantic Philanthropies and was produced as part of New America Media’s Women Immigrants Fellowship Program.  It was edited to conform with New America Media’s and Public Radio International's style guidelines