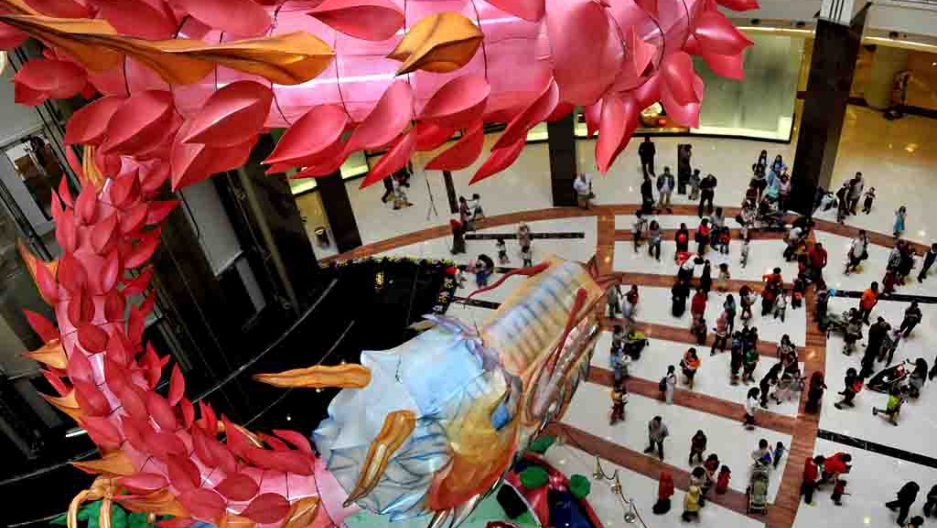 A dragon decoration at a shopping mall in Jakarta on January 21, 2012 ahead of the Chinese Lunar new year of the dragon.
Credit: Bay Ismoyo
Share

On Thursday, the New York Times — which now has a Mandarin edition — published a detailed investigation of Premier Wen Jiabao's unexplained wealth.

That followed immediately after a scandal concerning Cai Bin, a Guangdong official who somehow came to own 21 homes on a $1,600-a-month salary.

In both cases, discussion of the allegations was immediately scrubbed, leading observers to wonder why the government tolerates social media at all.

“Netizens airing out the dirty laundry looks like it’s getting out of hand, but the Party doesn’t have too much to worry about because it’s a paternalistic machine. When things do get out of hand, the Party exerts control. When everything’s okay, it loosens control,” said Lo Shiu Hing, a Chinese political expert at The Hong Kong Institute of Education.

“The role of the media is a double-edged sword for China," said Lo. "On the one hand, citizens are critical of the government. On the other, they are encouraged to dig out corruption and provide checks-and-balances. The internet plays a contradictory role, but it also provides the Party with a vehicle to mobilize support, such as what happened with the Diaoyu Islands.”

Before Cai Bin, social media was obsessed with another scandal, about a top official’s son who died a fiery death at the wheel of a $680,000 Ferrari while in various stages of undress with two young women. There was also a drunken official who assaulted an air hostess. And let's not forget all the chatter about disgraced former political heavyweight Bo Xilai.

Despite these examples of subversive online content, however, experts say Beijing has managed to keep a lid on the simmering discontent bubbling up through the country’s social media.

As the world’s second largest economy gears up for next month’s leadership transition, Beijing seems to be even more intent on controlling the narrative.

Other prohibited fare includes “revealing national secrets, threatening the honor of the nation, or promoting illicit behaviour” such as gambling. In late June, New York-based Bloomberg's website was blocked after it ran a story exposing the multi-million dollar financial interests of presumed incoming leader Xi Jinping’s family. A few weeks later, a number of editors from prominent newspapers that analysts termed as aggressive in their reporting of government-linked scandals were sacked from their posts.

But some insiders say that once the new leadership has been cemented, restrictions on both traditional and social media will ease.

“It’s a trend in China and its happening again right now. You see clampdowns because the propaganda guys in Beijing want everything to go according to script," said Doug Young, a Chinese media expert at Shanghai’s Fudan University. "They want a tight-fisted environment so the new leaders can come in and decide how they want to proceed. It’s a more heavily controlled media environment now than a year ago."

Young, who authored the upcoming book, “The Party Line: How the Media Dictate Public Opinion in Modern China,” says that Beijing has loosened its grip on both traditional and new media over the past decade and expects that process to continue.

“It’s like anything new. They were very nervous about it [social media]. They didn’t understand it, or how it worked. But they’ve been able to control all the sites based in China, so they control the subjects that are being discussed, or force the operators to eliminate subjects they don’t want discussed,” said Young.

“They see social media as a productive force, because it’s a great way for them to gauge public sentiment," Young added. "They also see it as a way for the public to let off steam when there’s discontent. The most recent application, which they really like, is that it’s a good way for them to deliver their own messages. It’s a propaganda tool.”

More from GlobalPost: America the Gutted, a look at the global middle class

Young says Beijing tolerates social media users skirting the censors through clever use of wordplay, puns and codes to engage in “underground discussions” particularly low-level corruption cases which expose “low-level people” because it allows the public to vent and shows the government is trying to root out corruption.

Of course, when it comes to the high-level people, the clampdown is much swifter, says Young.

"The government wants to show concerns are being addressed and corruption is a big concern in society. If you just cover it up and pretend it doesn’t exist you’re just going to get this simmering resentment. They allow a certain level of debate,” said Young.

Despite China playing host to over 500 million internet users, the likelihood of online dissent — not to mention the estimated 70,000 plus protests throughout the country last year — resulting in political change remains remote.

“The protests in rural areas have been happening for some time. But by and large the bottom line of governance is not touched by them. They are sporadic events without the presence of viable organizing opposition groups.  The CCP hasn’t been shaken by loosely organized protests which are dealt with by local authorities quite quickly,” said Lo.