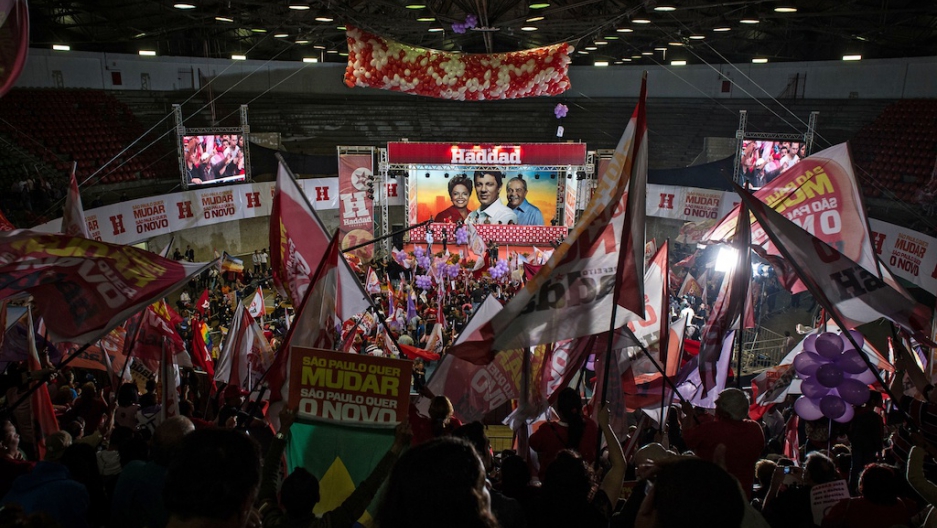 SAO PAULO, Brazil — In Brazil, it’s not unusual to see “Taliban” run for election. That is, after all, Farvardin Asazadeh Asgarabadi’s nickname. The 45-year-old merchant living in the Sao Paulo town of Pindamonhangaba is originally from Iran, but is now running for city councilman in his new home.

He’s not alone. Some 1,450 naturalized Brazilian citizens are running for positions on city council, including the top spot of mayor, across the country, according to Brazil’s electoral court.

They come from as near as Uruguay and Bolivia to as far as Uganda and Lebanon, representing 35 countries across the Americas, Europe, Africa and Asia.

After a first round of voting on Oct. 7, Brazilians are set to go to the polls again on Oct. 28 to vote for local governments. And as more than 80,000 candidates are vying for posts, nearly 2 percent of them are proud emigres.

Brazil has a long tradition of welcoming immigrants. As its jobs market expands, parts of the country are witnessing new waves of migrants seeking opportunities in Latin America’s largest economy. Now in a bold move toward assimilation, many of them have set their sights on top leadership roles in the local governments of their adoptive home.

It doesn’t take much to be able to run for office as a foreigner in Brazil. Once a naturalized citizen, all that is needed is a voter registration card issued at least one year prior to the election.

Portuguese candidates, on the other hand, only need permanent residency. Brazil’s constitution states that anyone coming from Portugal has the same political rights as natural-born Brazilians.

However, no foreigner can dream of being president of Brazil, says Alberto Rollo, lawyer and expert in Brazilian electoral law.

And as a country full of immigrant communities — particularly in Sao Paulo state, where the majority of candidates who are naturalized citizens (213) are running — having non-natives run for office is not a new phenomenon in Brazil.

In fact, the number of foreign-born candidates has fallen 18 percent since the 2008 municipal elections, when 1,770 ran.

But many of them have a chance at winning. This year, some already have.

Brazil’s electoral system is a two-step process. If a candidate gets more than 50 percent of the vote, it’s a win. If not, the two candidates with the most votes go on to a second round — this Sunday — before a winner is declared.

It only took one round for Colombian Carlos Amastha to be named mayor of Palmas, in the northeastern state of Tocantins. He won with 49.65 percent, which is all it takes in a city with fewer than 200,000 voters.

Immigration rates in Sao Paulo have slowed over the past 20 years, and are on the decline in Brazil as a whole as well, according to the Brazilian Institute of Geography and Statistics. But in the north and northeastern parts of the country, the opposite trend is occurring: immigration numbers are climbing.

Tocantins’ population of naturalized citizens has more than doubled in the last two decades, and the number of foreigners living in the state has almost tripled, which could have played a role in Amastha’s win.

“The population allowed someone who wasn’t born in Brazil to be its mayor. It’s an example of [a good sense of] citizenry,” Amastha told Brazilian news site G1 after his win on Oct. 7.

More from GlobalPost: What if Brazil could vote in the US election?