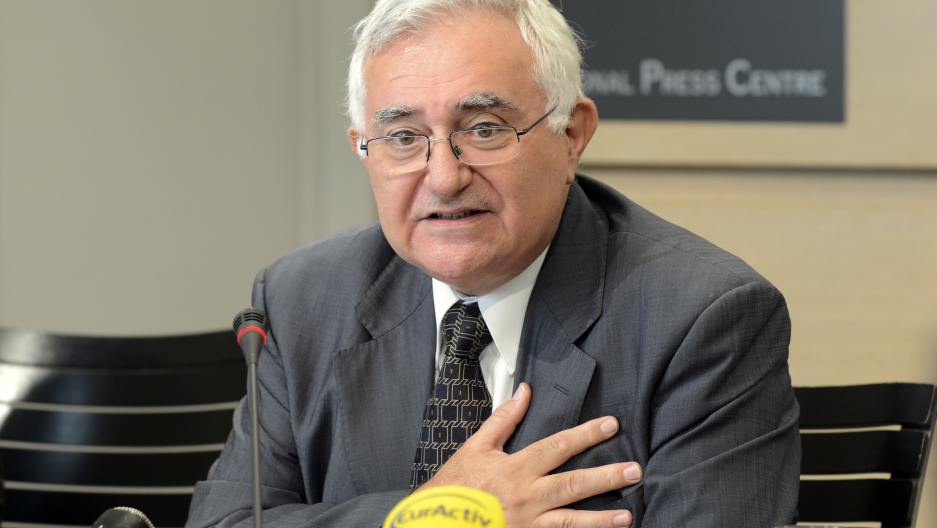 John Dalli on Wednesday. He's speculated the tobacco industry may have tried to compromise him to scuttle his anti-tobacco legislation.
Credit: Thierry Charlier
Share

LONDON, UK — Corruption allegations, unexplained break-ins, dark conspiracy theories and Swedish snuff: Those aren’t the elements of a Hollywood film, but developments in a plot surrounding Europe’s efforts to get tough on nicotine.

At stake are billions of dollars of potential tobacco trade and the career of one of the European Union’s senior figures. Also on the line is a long-awaited piece of legislation health campaigners hope will score a major victory in a long battle to cut cigarette consumption.

Given the cloud of disapproval that’s enveloped big tobacco at least since the days US manufacturers denied their products were addictive, the scandal has predictably generated allegations the industry is resorting to underhanded tactics to protect its steadily shrinking market.

The controversy erupted earlier this year when Swedish Match, which produces a snuff-based chewing tobacco popular in parts of Scandinavia, claimed it had been propositioned by a lobbyist with connections to John Dalli, a veteran Maltese politician serving as the EU’s health commissioner.

The manufacturer said businessman Silvio Zammit, also from Malta, had suggested he could persuade Dalli to alter forthcoming legislation on tobacco products by lifting an EU export and marketing ban on its snus chewing tobacco — for a consideration of $78 million.

Swedish Match said it refused the offer and called in OLAF, the EU’s fraud investigators. OLAF found “unambiguous circumstantial pieces of evidence” indicating Dalli was aware of — but not involved in — Zammit’s activities and referred the matter to the Maltese authorities.

Dalli denies the accusation. “There is no evidence that I was in any way involved in this issue,” he told the Times of Malta. “I have consistently stated that I was unaware of communication passing between Silvio Zammit and the snus people.”

Barroso denies the charge and says Dalli resigned voluntarily. Earlier in the day, he wrote to him saying that "you have yourself unambiguously declared your immediate resignation, before the director general of the legal service and the head of my private office,” the BBC reported. He called Dalli’s accusation “incomprehensible.”

The scandal has put the tobacco legislation’s future in doubt. Under Dalli, it had been beefed up with proposals to strip cigarette packages of almost all branding and tighten regulations on smokeless products such as electronic cigarettes and snuff.

Those measures — similar to a groundbreaking new Australian law that from December will require cigarettes to be sold in plain packs — have drawn condemnation from the tobacco industry. Retail lobbyists say they could cause a $26 billion loss in European tax revenues.

Dalli has hinted at dark forces at play.

Since his departure, he’s expressed concerns his legislation will be “diluted” or swept away, saying he’d been subjected to “an attempt to dissuade me from going ahead with certain measures” even before allegations had been lodged against him.

Others share his worries. "This was going to be the mainstay of tobacco policy for the European Union over the coming years and the danger now is that it is dead in the water," said Anna Gilmore, professor of public health at the UK’s University of Bath.

Dalli has written to EU lawmakers claiming that Swedish Match had tried to set up meetings with him through middlemen in July, according to the EUObserver.com website. He told the website “it had passed my mind” that the tobacco industry had conspired in his demise.

Swedish Match has denied all claims of impropriety and highlighted its own prompt involvement with OLAF. The tobacco firm, which stands to gain a $2.3 billion market if snus restrictions are lifted, says it wants the new laws introduced via a “transparent and legally fair process.”

But Dalli, a reformed smoker, isn’t alone in his pessimistic outlook or his view that sinister hands may be at work, particularly given an unusual series of events that took place in the days following the scandal’s development.

First there were the burglaries. Last week, two days after Dalli left his job, the premises of three anti-smoking groups — the European Public Health Alliance, the European Respiratory Society and the Smoke Free Partnership — in a building in Brussels were broken into.

Laptops and information relating to their campaign work are understood to have been taken. But although the organizations viewed the raids as the work of determined professionals, none of them blamed tobacco companies.

“We do not subscribe to conspiracy theories,” said a spokesman for the European Public Health Alliance. “However, in light of the evidence we feel we have legitimate reason to suspect the intrusion was well-planned, researched and targeted.”

As the plot continues to thicken, there have been claims tobacco lobbyists are trying to steer journalists covering the story. Meanwhile, the electronic cigarette industry has wasted no time posting a scurrilous blog about alleged skeletons in Dalli’s closet.

It coincided with an equally timely publication of an essay by Steve Stotesbury, a scientist working for Imperial Tobacco, outlining positive health effects of snus use. He claims countries exempt from the current EU ban show lower rates of smoking-related disease.

Whether or not the smoke surrounding what happened before and after Dalli’s exit clears, it’s certain the EU tobacco legislation, if it ever emerges, could reshape the continent’s nicotine habits.

Smoking across EU countries is already in retreat: Adult consumers fell from 28.15 percent of the population to 25.57 percent between 2002 and 2009, according to the World Health Organization. But experts say new impetus is needed because the rate of decline is slowing.

"Evidence suggests that the anticipated legislation would have an impact,” said Gilmore, the public health professor. Without it, she said, the tobacco industry will adapt to existing restrictions such as taxes, marketing and workplace smoking bans, and recruit new customers.

“Right now it is increasingly relying on the cigarette pack to promote its products and, in particular, to recruit young new smokers,” she added. “Policies that reduce the marketing potential of the pack through plain packaging or large warning labels are therefore very important."