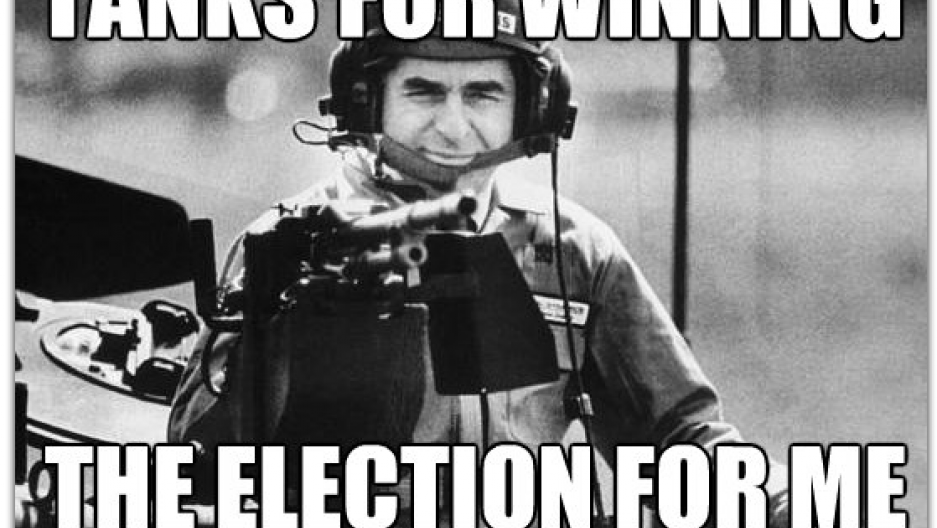 Memes: circa 2012, we'd be hard-pressed to make even the most pathetically inconsequential of political decisions without them. We may actually have begun to reason in meme, judging by how rapidly they proliferate on Twitter and Facebook, and by their remarkable power to influence the election cycle.

Mitt Romney talking about binders full of women? On it. Bayonets and horses in the modern era, thanks to Barack Obama? Bam, make a hilarious image and share it with all your friends. We live in an era of ascendent LolCats, convenient meme generators (no Photoshop acumen required!) and Facebook pages that allow us to share topical hilarity at the click of a button. But it wasn't always thus.

Indeed, there was an era before the internet, when idiot political behavior and hilariously off-kilter statements were only projected to the public on television, the radio, and in print — and no one could "like" anything. But what if we did have the internet back in those halcyon, sepia-tinted days? What would have been the topical memes of the past? Here are some ideas.

Lyndon B. Johnson, originator of the Great Society, signer of revolutionary civil rights legislation and escalator of the profoundly unpopular War in Vietnam, had a remarkably complex legacy that is still being unraveled today.

LBJ was an astute political player, but the Great Society president failed to realize that the treatment of presidential pets happens to be a massive cultural minefield — and in 1964, he wandered right into it when he decided to jovially lift up his two pet beagles by their ears while talking with a reporter at the White House. Whoops.

"It's good for them," said LBJ of this curious method of play to the doubtless ecstatic Time reporter, who noted their apparently anguished yapping. "It does them good to let them bark."

The American public swiftly leapt upon LBJ's beagle-ears scandal with the sort of drooling, Hound of the Baskervilles-like ferocity that has fallen upon Romney and his now-immortal incontinent Irish Setter Seamus, who was famously tied to the roof of the car on a family vacation.

If only Romney had realized — as LBJ did, long ago — that politicians should take extreme pains to treat their pets very, very well. It is in fact perhaps a matter of more import than the equitable treatment of candidates' children, judging from how the media (present company included) tends to respond to such allegations. Ain't no one likes a dog torturer.

Sadly, "Him," the male of the pair, was run over at the White House in 1966. Let's pause for a moment to contemplate the horrifying enormity of running over the president's dog for the driver who committed the crime. To say nothing for the dog.

(Perhaps to assuage US fears that their leader was an inveterate dog torturer, LBJ actually recorded a song with his little dog Yuki later in his presidency. Should Romney try something similar?)

Before George W. Bush donned paratrooper gear and declared a somewhat premature Mission Accomplished, there was Michael Dukakis. The then-Governor Dukakis was running against George H. W. Bush in the 1988 election, parlaying economic success in Massachusetts into his campaign. Unfortunately, the diminutive Dukakis did a fairly dismal job of convincing the electorate he possessed the gravitas required to be the President of the Free Goddamned World. To alleviate that perceived lack of authority, Dukakis decided he needed to be photographed doing something extremely manly and commanding-like.

So he donned commando gear and hopped into a tank.

Unfortunately, Dukakis looked less like a commanding, Churchill-esque figure during this stunt, and rather more like a seven-year-old child might appear when she has decided to try on her mother's fancy shoes. The George H. W. Bush campaign jumped all over Dukakis and his adorable wikkle helmet, calling him "soft on defense." Between that and the infamous Willie Horton advertising campaign, Dukakis's campaign was sunk.

3. Andrew Jackson and the Giant Cheese

Old Hickory, as he was known to some, happened to have a favorite snack: cheese. Due to this public proclivity, a New York farmer decided he'd send Jackson the ultimate commerative gift: a 1,400 pound block of cheese, wrapped in patriotic slogans. (Not hickory-smoked cheddar. Sorry).

The cheese ended up at the White House, forcing Jackson to figure out what to do with it. After sending out chunks to friends, he was still left with a block of cheese around the size of most cars inside the at-the-time-new presidential residency. The cheese persisted for about two years, until Jackson decided on a novel idea for his final public presidential reception: He'd invite the little people in to help him eat all that blasted cheese.

Which, they did. The cheese allegedly vanished in around two hours, down the gullets of 10,000 eager visitors.

Seriously, think on it: There was an enormous goddamn cheese in the White House for months of end, being delicately nibbled on by the populace and lending a somewhat ripe aroma to the seat of power of the new republic. I am not making this up. History teachers really ought to exploit this marvelous anecdote more often.

5. Gerald Ford Forgets All About Those Pesky Russian Incursions

Gerald Ford was debating some loser Democrat punk from Georgia named Jimmy Carter for the presidency in 1976 when moderator Max Frankel of The New York Times pitched him a rather topical question: He asked about the spread of Communism in Europe, precipitated by the influence of the Soviet Union.

"There is no Soviet domination of Eastern Europe, and there never will be under a Ford Administration," Ford said.

Frankel, who visibly blanches in the video of the debate, attempted to save Ford's skin with a follow-up question — but Ford would have none of it.

By his reckoning, Yugoslavia, Rumania and even Poland were not under the Soviet thumb. "Each of these countries is independent, autonomous; it has its own territorial integrity," Ford insisted, referring to Romania, Poland, and the former Yugoslavia.

Ford continued to blithely dig his own grave, insisting that none of the Eastern bloc countries mentioned were under the forcible influence of the Soviet Union.

Except, of course, they were and had been for years, a fact he had somehow managed to overlook while engaged in nuclear detente with the Reds throughout his administration. That's not worrisome in the slightest. Needless to say, Carter defeated Ford for the Presidency.

The uber-manly and majestically mustachioed Teddy Roosevelt is fondly remembered as one of America's great leaders, presiding over the prosperity of the Gilded Age — a courageous trust-buster who helped to turn the US into an international power, incorporating a foreign policy strategy he claimed was "based on the exercise of intelligent forethought and of decisive action sufficiently far in advance of any likely crisis."

Teddy's foreign policy principles were summed up as "big stick ideology," referring to his decidedly succinct way of explaining his strategy: "Speak softly, and carry a big stick; you will go far."

The phrase first crops up in a 1900 letter from Roosevelt to Henry L. Sprauge, when Roosevelt was still the governor of New York. He claimed it was a West African phrase, but it remains uncertain if this is actually so, or if Teddy himself coined it, perhaps inspired by his big game hunting adventures before his ascendancy to the presidency.