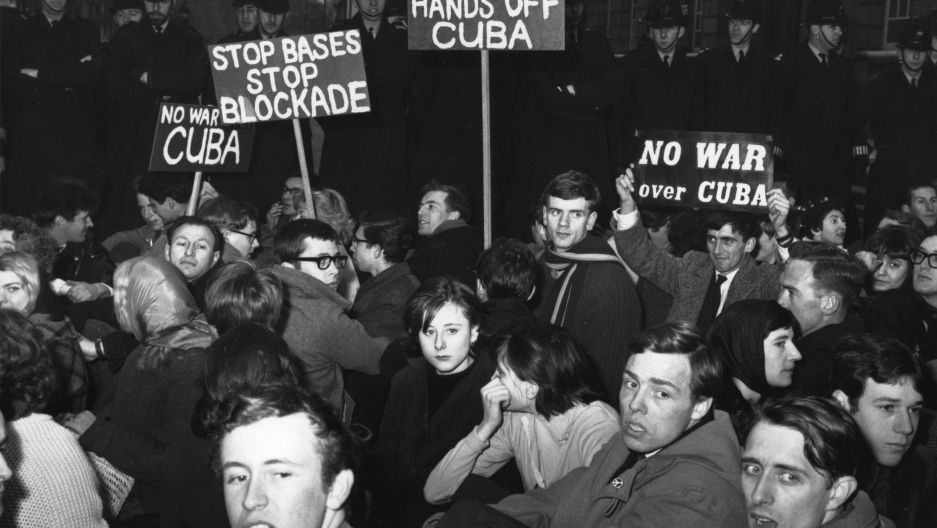 HAVANA, Cuba — The deal made 50 years ago this week to end the Cuban missile crisis and stave off nuclear Armageddon is widely viewed today as a win-win for Moscow and Washington.

US President John F. Kennedy got the Soviets to remove their missiles from Cuba.

Soviet premier Nikita Khrushchev forced Kennedy to pull US nukes out of Turkey.

And the world got a sobering lesson in the risks of nuclear brinkmanship, a game not worth playing when the stakes are so high.

But a half-century of hindsight suggests the real winner of the crisis was the one figure who was famously left out of the negotiations: Fidel Castro. Of all the main actors in the gut-wrenching drama, only Castro gave nothing to get something in return.

Which is ironic, given that Castro was also the only one who wasn’t pleased by the Oct. 27, 1962 agreement that brought a peaceful end to the crisis. Kennedy and Khrushchev were relieved; Castro was fuming mad.

The then-36-year-old comandante was incensed that Khrushchev had negotiated with Washington behind his back and agreed to withdraw the missiles without consulting him. After the CIA’s failed Bay of Pigs invasion in April 1961, Castro wanted the weapons as a deterrent to keep the United States from attempting another intervention on the island.

Instead, the Kennedy-Khrushchev deal left Cuba with a verbal guarantee from the White House that the US would not invade — a promise Castro viewed as worthless at the time.

But the Americans kept their word. While Castro would continue to face CIA assassination plots, covert attacks and five decades of US economic sanctions, the US Marines never stormed the beaches of Varadero and the 82nd Airborne Division never landed on the Havana Malecon.

Even once the missiles were gone, their short-lived deployment on the island had given Cuba the lasting security it was looking for in the first place.

The resolution of the missile crisis would also end up helping Castro consolidate his Cuban Revolution, thanks to the generous financial and military aid that Moscow sent to smooth things over with the young Cuban leader.

“As a result of the crisis, Fidel took the upper hand with the Soviets,” said Carlos Alzugaray, a former Cuban diplomat and professor of international relations at the University of Havana. “In 1963-64 he traveled to the Soviet Union and got very good deals.”

Alzugaray, who was a 19-year-old military analyst at Cuba’s Foreign Ministry at the time of the crisis, said the episode was a valuable lesson for Cuba that it could not depend on other nations — even superpowers like the USSR — for its self-defense.

“We learned we had to deter the US by ourselves,” he said. “The national security of Cuba was a Cuban question.”

Still, the enduring view among some pro-Castro scholars is that Khrushchev sold Havana short, and could have bargained for more.

“Kennedy only negotiated the removal of the missiles,” said US-Cuba relations scholar Esteban Morales. “He never felt pressured to negotiate more substantial elements of the relationship with Cuba.”

Morales was present at a historic conference in 2002 for the 40th anniversary of the nuclear standoff — referred to on the island as “The October Crisis” — which Castro hosted and was attended by former Soviet commanders as well as Kennedy aides like Robert McNamara and Arthur Schlesinger Jr.

“The reality is that we lost,” Morales said, arguing that the abrupt withdrawal of the missiles allowed the US to continue its low-intensity campaign against Cuba through 50 years of economic sanctions and destabilization attempts.

The nukes were viewed as a military equalizer, he says. But they could have been a geopolitical equalizer too.

“We’ve never had another opportunity like that to pressure the United States to change its policies,” said Morales.

But new Soviet archival materials suggest Kennedy wasn’t the only one wary of a nuclear-armed Cuba.

Khrushchev had secretly left nearly 100 tactical nuclear weapons on the island without Kennedy’s knowledge — a decision that could have unraveled the fragile pact he’d made with the Americans.

But Castro’s combative rhetoric and apparent eagerness to confront the United States left Khrushchev ill at ease with the young Cuban, according to personal letters of former Soviet envoy Anastas Mikoyan released this month by the US National Security Archive. In November 1962, Khrushchev dispatched Mikoyan to Havana to bring back all the nuclear weapons.

More from GlobalPost: Cuba on the ballot in the US election

Already steaming, Castro met with Mikoyan for tense discussions over a 20-day period, but his sense of betrayal only increased. It would remain a sore point with Moscow for nearly 30 years.

The 86-year-old Castro hasn’t commented on the new revelations. He is in no condition to host another conference rehashing the crisis with his former allies and adversaries. But he resurfaced in public this week for the first time since March, squelching the latest rumors of his imminent demise.

In his first written article since June, he also pushed back at blame for his role in bringing about the nuclear standoff.

Cuba accepted the Soviet missiles on the island in the spirit of solidarity after Kennedy put US weapons in Turkey, Castro said. “Our conduct was ethically unimpeachable,” he wrote. “We’ll never make excuses to anyone for what we did.”