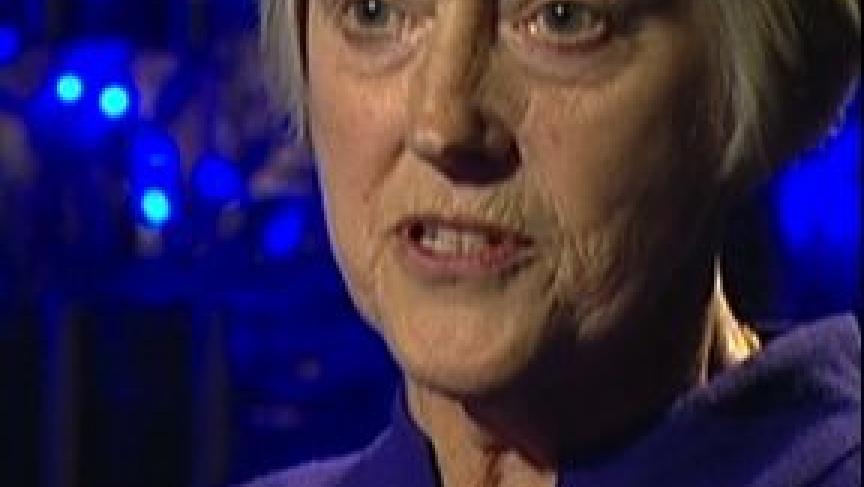 Stella Rimington was the director of Britiain's MI5. (Photo courtesy of the BBC.)

In the world of espionage, personality is often totally fictionalized.

Maybe that’s why real-life episodes involving spies make us think they’re sometimes just like fiction. And why so many spies’ memoirs include that scene when the spook starts believing his own concocted fiction.

Stella Rimington, though, is a special case — a real-life spy, the real inspiration for a character in James Bond movies, and a writer of spy fiction, all rolled into one person.

Until the early 1990s, Stella Rimington was anonymous, working for Britain’s MI5. She was married with two daughters, able to live a normal life with a bit of improvisation.

“You get invited to your neighbor’s Christmas (party),” she said. “You have to work out what you’re going to say for the evening, because the first question anybody asks you when you go to a party is, ‘What do you do?’”

Rimington always had an answer. She’d say she worked for a cosmetics company, or for the Ministry of Defense procuring boots. But then, she might be introduced to people who actually worked in cosmetics or footwear.

She says it was natural to try to avoid situations like that. It was difficult not to retreat to a “closed world.”

But it wasn’t exactly a relief when she was publicly named. That came in 1992 when Rimington became Director-General of MI5. The British government decided that it was time to put a name to the head of the shadowy agency.

“This dramatic announcement became more dramatic because I was a woman,” Rimington said. “The media and most of their readers thought that our intelligence services were run by men.”

Rimington soon posed for the media cameras. But then she again got caught up in a make-believe world. She became the model for James Bond’s boss, M, the fictional head of MI5. Today, many Bond fans people think of actress Judi Dench as Stella Rimington — or, perhaps, the other way round.

Dench is back playing her version of Stella Rimington in the upcoming Bond movie Skyfall. Not to be outdone on the fiction front, Rimington, who retired from MI5 since 1996, has just completed her seventh thriller, which features a female British spy.

And Rimington doesn’t mind projecting an exaggerated — some might say fictional — persona at social occasions.

“People regard you with a certain degree of caution because they don’t know what you know,” she said. “I remember going to a dinner shortly after I retired. I was sitting at a table with some very senior British businessmen, and the ambassador of a former Soviet bloc country. And he suddenly announced to the entire table, ‘She knows the names of all my mistresses.’”

Rimington enjoyed the looks of panic around the table. And though she had no information about the ambassador’s private life, she chose not to set the record straight.