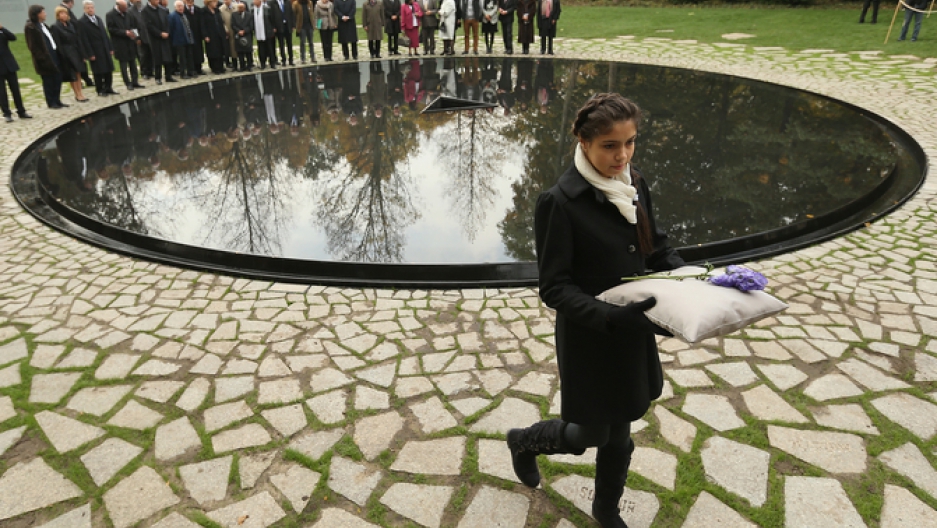 BERLIN, Germany — Almost 70 years after the end of World War II, Germany has unveiled a memorial to the up to half-a-million Roma and related Sinti people murdered by the Nazis.

The memorial, a dark, circular pool of water with a triangular plinth in the center — where a fresh flower will be placed every day — stands in the capital’s Tiergarten park near the Reichstag.

Chancellor Angela Merkel and President Joachim Gauck joined politicians and representatives of the Roma and Sinti communities, as well as 100 elderly Holocaust survivors for the unveiling ceremony.

However, representatives of the Roma and Sinti — a related people who live mostly in German-speaking Central Europe — say the memorial should also serve as a warning about ongoing discrimination across the continent today.

Romani Rose, president of the Central Council of German Sinti and Roma, said every Roma and Sinti family in Germany had lost members during the Holocaust. “It still shapes our identity to this day,” he said.

Dutch survivor Zoni Weisz recalled how he stood on a train platform as a 7 year-old and watched as his parents and siblings were deported to Auschwitz. He called the genocide of the Sinti and Roma the “forgotten Holocaust.”

Gaining recognition for the Porajmos, “the devouring” in Romani, has been a long road.

The government took almost 40 years to admit the mass murder was an act of genocide. A court ruled in 1956 that survivors shouldn’t be compensated because the murders weren’t based on race but the Nazis’ classification of Roma and Sinti as asocial and criminals.

In fact, SS chief Heinrich Himmler had ordered the “Final Solution of the Gypsies Question” in 1938. “Racial scientists” proceeded to develop lists of characteristics and trace family trees, sometimes back to the 16th century.

Thousands of Roma and Sinti were rounded up and sent to special camps inside Germany. In 1942, Himmler ordered their deportation to concentration camps, including Auschwitz-Birkenau in occupied Poland.

Many of its Roma and Sinti inmates were subjected to gruesome medical experiments and forced sterilization. In August 1943, they were killed en masse in the camp’s gas chambers. Historians estimate that the Nazis murdered up to 500,000 Roma and Sinti across Eastern Europe.

Herbert Heuss, spokesman for the Central Council of German Sinti and Roma, said the episode should become part of the school curriculum in Germany and other countries. “We expect that the fate of the Roma and Sinti during the Third Reich will become part of the historical memory in this country,” he said in an interview.

Wolfgang Wippermann, a historian at Berlin’s Free University, was among those who began researching the mass murders in the 1980s. “We found that it really was genocide,” he said. “It was intentional and racially motivated. It can be absolutely compared to the Shoah, the genocide of the Jewish people.”

He attributes the failure to recognize the genocide after the war partly to ongoing discrimination against Roma and unwillingness to pay compensation.

Given the go ahead in 1992, the memorial faced years of delay and disputes over its design and location. The city of Berlin initially wanted to place it in the less prominent district of Marzahn, where hundreds of Roma and Sinti were held in terrible conditions from 1936.

Roma and Sinti representatives were thankful for the monument on Wednesday, but emphasized its importance to Roma who continue to face prejudice today.

An estimated 12 million Roma live in Europe, where many face crippling poverty and discrimination. They’ve recently suffered far-right violence and even murder in the Czech Republic and Hungary.

“Society has learned almost nothing from what happened,” Weisz said. “Otherwise they would treat us in a different way.”

A recent influx of asylum-seekers to Germany, many of them Roma from Serbia and Macedonia, raised tensions before the unveiling.

Immigration authorities say their number rose significantly after a court ruled in July that welfare payments to asylum seekers should be increased to match those of other recipients. The government has indicated it may reinstate visa requirements for the two countries, which are not EU members.

More from GlobalPost: EU goes back to bland

The Roma and Sinti council’s president Rose criticized Interior Minister Hans-Peter Friedrich ahead of Wednesday’s ceremony for saying last weekend that those seeking asylum were “abusing” the system.

“I regard bringing up the issue of asylum abuse in connection with a minority like the Sinti and Roma as more than discriminatory,” he told the Mittelbayerische Zeitung, saying that it came across as “rabble rousing.”

Historian Wippermann says the dispute shows memorials can go only so far in dealing with the ongoing discrimination.

“It would be fatal if one were to have the impression that there is now a memorial and everything is fine again.”